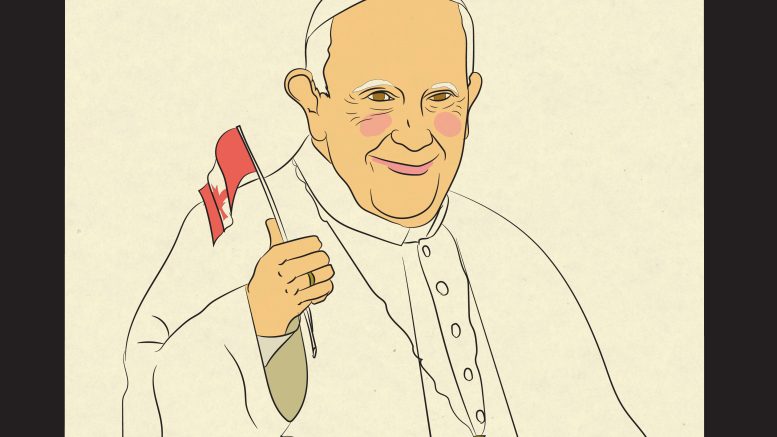 The Pope’s visit to Canada has long been awaited not only by Indigenous peoples, who were directly affected by the atrocities committed during the colonization process, but also by Ottawa bureaucrats who have failed to fulfill their obligations in the reconciliation process.

‍Parliamentarians have demonstrated that there is no real intent to pursue reconciliation, prompting many to question what the government’s course of action will be once Pope Francis presents the Catholic Church’s formal apology.

‍The papal visit, deemed a “pilgrim- age of penance,” will prioritze First Nations, Inuit and Métis communities from Alberta all the way to Québec, with Nunavut — the largest land claim in modern history — as the last stop.

‍Despite past regrets expressed by the Pope to an Indigenous delegation visiting the Vatican, the Catholic Church continues to fail their 2007 commitment to pay $29 million in compensation to residential school survivors, citing scarcity of funds. Furthermore, calls from the Métis National Council for the restitution of colonial-era Indigenous artifacts have furthered the tension between Indigenous groups and the Catholic Church — who portray the artifacts as “gifts.”

‍The reconciliation agenda awaiting Pope Francis is broad and might not live up to the standards of Indigenous communities, but the neglect that Indigenous people continue to face from the political establishment is not promising either.

‍Prime Minister Justin Trudeau, who identifies as a Catholic, has been one of the strongest advocates for a formal apology from the pontiff. He expressed his disappointment in the church, urging parishioners from across the country to contact local Catholic officials and ask them to “step up.”

‍Despite the Government of Canada committing to take significant steps toward a harmonious coexistence on Turtle Island, reconciliation requires more than a formal apology. The government must attempt to live up to its responsibilities toward Indigenous peoples and the land.

‍To this day, dozens of Indigenous communities lack access to clean water, not to mention the many cases of missing and murdered Indigenous women, girls and two-spirit people that are being, once again, systemically neglected.

‍Reconciliation is not a hot potato, despite the issue being historically treated as such. Rather, it should be a joint effort on behalf of all those in positions of power to apologize through both words and action, in order for Indigenous people to be able to move forward.