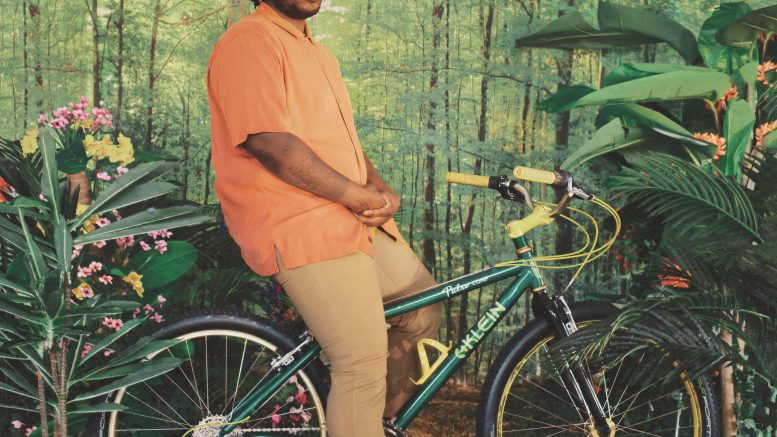 Haywood-Smith talks about drawing specific inspiration from Kendrick Lamar, one of the most acclaimed artists of his generation known for making knotty, highly conceptual albums. Musically, though, Haywood- Smith is pulling from all over, recalling psych-rock, indie-pop, hip-hop, neo- soul, funk and rock all at once.

But, predominantly, Slingshot is a chill album. Chill to a troubling level, like when you’ve sunbathed a little too long and the world starts to spin. The production is so dense and the song structures are so convoluted that the songs are difficult to digest fully — there’s simply too much going on.

It seems like JayWood instead wants the listener to take in the record as mood music. Everything is buried in a sea of reverb, and the vocals are largely incomprehensible behind walls of guitar and synth pads. This leaves the listener to focus on the groove and space out as the myriad of other elements swirl in the background.

A few songs stand out from the pack. Opener “God Is A Reptile” has a refreshing aggression and bite to it, smartly saving its introduction of the album’s default mode of sensory overload until its climax. “Just Sayin’” has great clarity, with alight funky groove and bright backing vocals from Ami Cheon. And “All Night Long” is another nice one, coming at JayWood’s signature indie-groove sound through summery ’10s-era chillwave, a genre that I am always happy to hear nods toward.

The back half of the album becomes frustrating, especially in the stretch from “Kitchen Floor” to “Tulips,” where the tempos drag and the song lengths extend past the five minute mark.

“Kitchen Floor” seems like a lyric- ally-dense and interesting track, but the production is so washed-out that it is impossible to understand what is being said. Meanwhile “Shine” is supposed to be a protest song — the video juxtaposes footage of Haywood- Smith with footage of 2020 Black Lives Matter protests —but it is so chill musically that it sounds like more of a shoulder shrug than a protest.

JayWood’s Slingshot doesn’t quite follow through on its conceptual ambitions, but its infectious grooves and hazy summer vibes still make it a worthwhile listen.

Hopefully this is just the start for Haywood-Smith as he becomes a more confident songwriter.

Essentially a playlist : How can we sleep when are beds are burning?

The best is yet to come for the Blue Stones