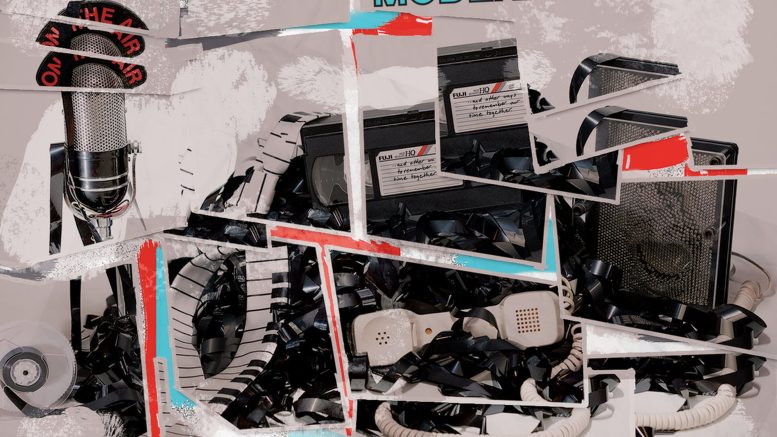 Self-described as adding “modern flare to a vintage aesthetic,” North Graffiti’s album Modern Relics successfully reflects its musical tagline. Just like the album’s cover, the “punk & roll” local group pulls together the fragments of vintage punk and rock past with present instrumentals.

There are recognizable hints of notable bands’ tonal styles sprinkled throughout the album. “Any Other Way” harmonizes into the style of the Cure, but with the frantic beat and vocal stylings of the White Stripes and Jack White à la “Fell in Love with a Girl.” The track “Fancy Screaming You Here” opens like a song of the Sex Pistols before blending a fresh punk-rock take on Mötley Crüe-like chords and vocals.

However, where there is homage or nostalgia, there is creativity. Third track “The Entertainer” has lead guitarist and vocalist Johannes Lodewyks crooning like Bruce Springsteen, but the band pairs the sound with self-aware lyrics dissecting a musician’s role.

Set to a lively exhibit of ’90s-rock feel, North Graffiti reflects specifically on the prairie band experience of touring the expansiveness of Canada. Lyrics “16 hours across these prairies to Edmonton” followed by “a pair of shows and 16 hours home […] that’s why they call me the entertainer” lend a satirical examination of the weariness of prairie road travel purely for the joy of entertaining fans two provinces over.

A well-deserved mention of the album is song length. In an era of bloated singles, most tracks on the album average under three minutes, which is a refreshing take on the industry norm of four-plus minutes.

What is most exciting about the nostalgic twists of Modern Relics is not just the homage to bands of the past, but the homage to sounds of the past. “I Was a Lone Wolf” is a textbook example of this. Though the instrumentals and even vocals bring the Strokes to mind, the overall sound is a nostalgic hit of 2000s pop-punk. While listening to the track, you can almost see the opening credits of a film starring the likes of Brittany Murphy or Alicia Silverstone.

Overloaded with nostalgic feel, North Graffiti concocts a timeless-sounding album by injecting a blend of familiar but bygone instrumentals. Modern Relics stands as a time capsule of how the genres of past powerhouses are remixed and remembered in the current music scene.