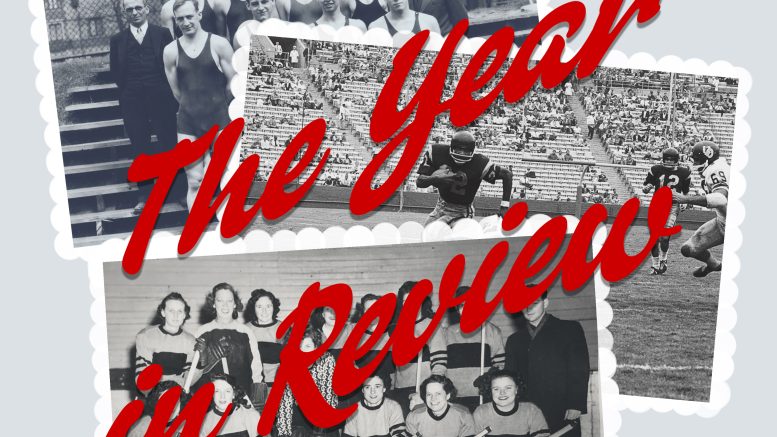 After the COVID-19 pandemic spelled the postponement of sports at the University of Manitoba, Bison Sports came back better than ever in 2021. Many notable storylines made for a truly memorable year for the brown and gold.

On May 5, 2021, Canada West announced conference competition would make a return in the fall. The Bisons women’s soccer was the first team scheduled to play on campus in more than a year.

Making the most of its return, the women’s soccer team put on an electrifying performance in front of 230 fans in the home opener. Playing against the University of Regina Cougars, the herd’s offence was on full display in its 3-1 victory. First-year Bison Bianca Cavalcanti scored two goals in her debut, setting her up for a marvellous rookie season in which she finished with nine goals, good for third overall in the conference. At the end of the season, Cavalcanti was named a second team all-star and appointed to the Canada West all-rookie team. In November, she garnered national praise, being named to the U Sports women’s soccer all-rookie team.

The Bisons football team had a storied 2021 season. While dealing with the devastating loss of assistant coach Scott Naujoks, the brown and gold fought its way to a 4-2 record, securing a seventh overall national ranking. Sitting at second place in Canada West, the Bisons had home-field advantage for the first time in eight years for its playoff matchup against the University of Alberta Golden Bears. On game day, kickoff was delayed for nearly an hour due to blizzard conditions. Under snowfall, the herd put up 43 points to defeat the Golden Bears and move on to the Hardy Cup final. Unfortunately, the Bisons fell short, losing to the University of Saskatchewan Huskies 45-17.

On Feb. 11, the Bisons men’s hockey team faced off against the Mike Babcock-led University of Saskatchewan Huskies. A perennial powerhouse, theU of S had the Bisons’ number all year, winning the previous three matchups.

With the herd officially out of the playoff race, Bison coach Mike Sirant elected to start rookie Brett Murphy in net. Beginning the season as the third-string goaltender on the Bisons’ depth chart, Murphy slid into the second-string role after the departure of Liam Hughes to the ECHL. Although Murphy had not had any game action since late 2020 when he played for the Dryden GM Ice Dogs in the Superior International Junior HockeyLeague, he put on an impressive performance in net, making 27 saves for the 3-2 win.

Looking back at his Bison debut, Murphy was ecstatic to get his first win. He reflected on the nerves he experienced prior to facing off against one of the greatest coaches in hockey history and the calm he felt after making his first couple saves.

“It is a great feeling to walk away with a win against one of the top teams and coaches in the league,” said Murphy.

“[I] could feel some nerves walking out the gate, but after a couple saves [I] just got a feeling for the puck and had some fun. Our whole team came at them really hard all game and did not give them much room to answer our quick 3-0 lead, which made my job even easier throughout.”

After a breakout performance, Murphy said he is only getting started. He looks forward to returning to the team and helping the Bisons compete next season.

“My plan moving forward is just to keep working on my game all off season and come into next year hot and ready to compete,” said Murphy.

“We have a great team and I think we can find success if we stick to our game. This summer can’t go by fast enough.”

The Duckworth Challenge, the five-event in-season competition between the U of M and the University of Winnipeg Wesmen, is always a back-and-forth affair. This year’s edition was no different. After the women’s soccer team secured a win against the Wesmen in the fall, the U of W women’s basketball team won its game to tie the series. A late run in the fourth quarter allowed the U of M men’s basketball team to win its game, giving the Bisons the chance to win the Duckworth Challenge trophy in men’s volleyball. The herd made no mistake, winning in three straight sets to clinch the Bisons’ first Duckworth Challenge title since 2017.

In her final season as a Bison, Kelsey Wog put a bow on her storied U Sports career.

At the U Sports championship, Wog won four gold medals and broke the record in the 50 and 100-metre in her final event as a Bison. The Tokyo 2020 Olympian will go down as the most decorated swimmer in program history.

In late March, the U of M played host to a couple major events.

After the COVID-19 pandemic forced the cancellation of the 2020 U-Sports men’s volleyball championships hosted by the U of M, the Bisons hosted the tournament earlier this year. Although the herd’s national title hopes were dashed in the quarterfinals, the team performed well in consolation games against some of the top teams in the country.

The Bisons track and field team had much more success when it played host. The men won the Canada West championship and the women put on a bevy of excellent performances.

The herd continued its success at the U Sports national championship in Saint John, N.B., winning seven medals overall. Anna McConnell won the lone gold for the herd in shot put while Max Speiser won silver in the heptathlon. Canada West rookie of the year Daxx Turner continued his excellent season, winning two bronze medals at the event.

After two years of uncertainty, McConnell is taken aback by all that she has accomplished this season. Even after putting in so much time and effort to reach the top of U Sports, she is still trying to process her journey.

“I honestly can’t really describe it other than how it felt to realize that everything I had done this last year, even two years, paid off and that all the ups and downs were worth it.”

“It really just feels amazing and I’m so proud of myself.”

For McConnell, the growth she has experienced over the last few years has been indescribable. She credits her coach Mingpu Wu and her tireless consistency in helping her win gold.

“As an athlete, I have grown more this last year than I imagined I would in my entire [five] years of eligibility.”

The Hub opening delayed once again