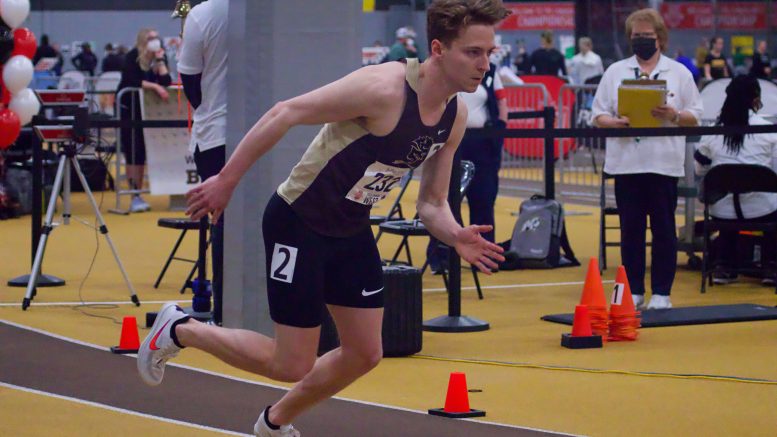 The Bisons put on an impressive performance in the U Sports national championships in Saint John, N.B. this past weekend, bringing home seven medals over three days of the competition.

Nearly two weeks prior to nationals, the herd was dominant at the Canada West championships, winning 13 medals in total on its home turf. Bison middle-distance runner Calvin Reimer was ecstatic after his performance. In only his second year of eligibility, Reimer was able to capture bronze in the 1,000 metre and contribute to his 4×800 relay team’s third-place finish. Riding high off a couple of successful performances, Reimer was excited to compete on a national stage.

“It was great to finally put some results down to show how hard we have all been working,” said Reimer.

“Medalling in an individual event wasn’t even a real goal of mine until after the first meet of the year back in January! It was definitely something I have been thinking about since I started my university running career, but just didn’t think it would happen this soon. Just shows how far my teammates and coaches have pushed me!

“Our 4x800m relay team […] as a collective, I think we were happy with medalling, but definitely not satisfied. We went into this meet thinking we could win and I still stand by it. I think this is only going to light the fire when we do it again in two weeks at the U Sports championships.”

Driven to outpace the competition, Reimer and his teammates hold themselves to the highest standard. He said no matter who they are running against, the Bisons squad expects to win whenever it competes. Reimer said his goal-oriented mindset would be deployed at the nationals, and he expected it to produce medals for the brown and gold.

“My mindset has been the same all year. Whenever I toe the line, I want to try to win,” said Reimer.

“No matter what times my other competitors may have run, I am still going to try and win. With our 4×800 relay team, I think we all are going in with a little chip on our shoulders. We are a good team and deserve to be mixing it up with Canada’s best. I think we need to re-establish and prove that.”

At the nationals, Reimer’s mental prowess and speed were put on display in the 4×800 relay. Alongside Justin Kroeker, Michael Wood and Tristan Allen, Reimer and his teammates won bronze, finishing with a time of 7:39.04.

The Bisons finished third in a few other events as well.

In the women’s long jump, Kirsten Hurdal won bronze. Having a breakout year, the third-year Bison flew 5.98 metres to take home her first U Sports medal.

Sprinter Jordan Soufi also capped off an impressive indoor season with a third-place finish. Running the 60-metre in only 6.77 seconds, Soufi added his bronze medal to the two silvers he won at the conference championships.

Daxx Turner had an outstanding performance at this year’s nationals. The Canada West men’s rookie of the year won bronze in both the men’s triple jump and high jump.

In the men’s heptathlon, Max Speiser secured the Bisons’ only silver medal. His second-place finish in the multi-discipline event was bolstered by strong showings in high jump and the 60-metre sprint, where he ranked second and fourth.

Anna McConnell was the herd’s most impressive athlete at nationals this past weekend. In shot put, she threw for 14.39 metres to take home her first U Sports gold medal, the Bisons’ only gold of the competition.

In overall team standings, the Bisons men finished fifth, while the women placed tenth. The University of Guelph Gryphons were the big winners of the weekend, finishing first in both standings to sweep nationals for the third straight season.