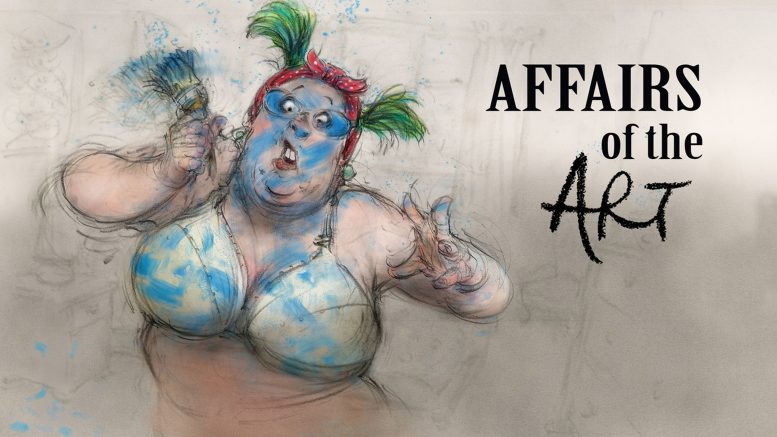 Image provided by the National Film Board of Canada

As a national institution pushing toward its 90th anniversary, it may not come as a surprise to some that the National Film Board of Canada (NFB) has officially picked up its 76th Academy Award nomination, considering the Board’s remarkable tenure.

The recipient of the NFB’s Oscar nomination for Best Animated Short Film is Affairs of the Art, a short created by United Kingdom filmmakers Joanna Quinn and Les Mills with their production company Beryl Productions International and co-produced by the NFB’s own Michael Fukushima.

While the short is described with the tagline “How many obsessions can one family have?”, it is morbid in a classically NFB kind of way.

Canadian viewers may see similarities in the humour and animation of Affairs of the Art to the canonically morbid — yet somehow beloved — NFB animated short, The Cat Came Back, by Winnipeg-born animator Cordell Barker, which was also nominated for an Oscar in 1989.

Though viewed as a kid-friendly adaption of the classic song, those in Canadian elementary school in the ’90s may remember an afternoon where the television and VCR cart was rolled into the classroom, followed by disconcerting feelings as they watched Mr. Johnson’s attempts to blow up a cat with a mountain of dynamite in Barker’s film.

Like Barker’s, Quinn and Mills’s film has a seemingly comical note, particularly at the start, where the narrator Beryl believes she is “Rousseau-esque” in her ability to draw, before the narrative quickly transfers to another obsession in the family: Beryl’s sister’s hobby of collecting bugs, waiting for them to die and then placing the corpses in raisin boxes.

This rapid shift from the silly to the morbid sets the stage for more macabre acts — like her sister purposefully attempting to murder her pet mouse via train set — dispersed amid the slapstick narrative of Beryl’s attempts at art.

Bouncing between Beryl’s story of reclaiming her artistic endeavours and increasingly macabre scenes of animal death and taxidermy, AFFAIRS OF THE ART is not a comfortable watch and employs a very specific sort of humour.

It’s as though the film is attempting Edgar Allan Poe-style dark comedy, see-sawing between the humorous and horrifying, but the film never fully realizes this effort.

Where Poe’s humour was balanced on unsympathetic characters whose disturbing experiences seemed deserved, the core of the film rests on a sympathetic narrator wasting her life in a factory instead of pursuing her dreams, placed in this circumstance by becoming pregnant before she had the chance to attend post-secondary school — an all-too-real experience for women which happens to this day.

As for recreating an environment comparable to nostalgic NFB films, Affairs of the Art morbidly hits the mark.

The animation style is aesthetically pleasing, which perhaps adds to the unnerving juxtaposition of the grisly scenes.

In fact, in his book Hinterland Remixed, film scholar Andrew Burke describes the NFB’s deluge of classroom-setting viewing in the last few decades of the 20th century as notorious for being “both soothing and sinister,” a quote that perfectly sums up the short.

Though a co-production with another studio, Affairs of the Art somehow manages to reconstruct this unsettling characteristic of past NFB productions.

Off-puttingly nostalgic, the film captures the essence of the NFB as remembered in Canadian classrooms.

While it should come with a warning label for its gruesome content, Affairs of the Art is an interesting take on artistically showcasing the obsessive hobbies of family members.

At the very least, the short is memorable, though in a morbid way.

Affairs of the Art is streaming for free on nfb.ca.

Patterson’s Wager is a safe bet

Music to live for