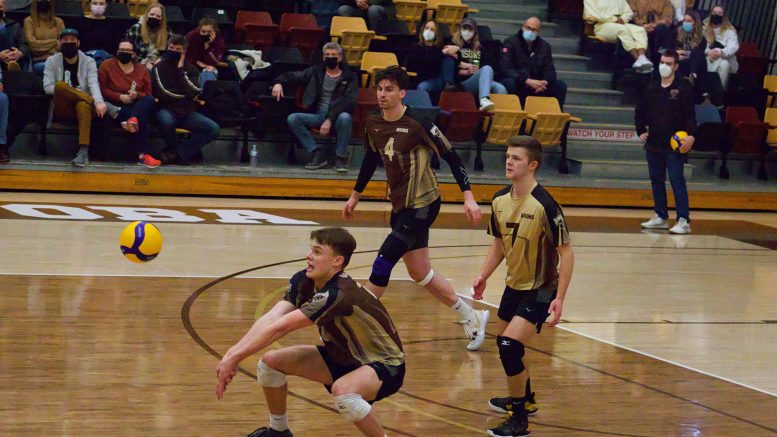 The University of Manitoba Bisons men’s volleyball team was in action this past weekend with a difficult clash against its provincial rivals, the Brandon university Bobcats. The Bobcats didn’t go easy on the Bisons, sweeping both games of its weekend series. This moved the herd’s record to seven wins and 11 losses on the Canada West regular season.

With the regular season finished, the squad heads downtown to the Duckworth Centre at the University of Winnipeg for the first round of the Canada West playoffs. Hosted by the U of M’s cross-town rivals, the University of Winnipeg Wesmen have been stiff competition all year. Bisons player Darian Koskie is excited to play against the Wesmen. He says the competitive nature between both teams helps fuel their drive to win.

“We are excited to be playing a home rival like this in the first round. Just like us, they are hungry and ready to get going into next week and we have to be ready for that.”

Going into the week, the Bisons need to do everything it can to get ready — having lost five out of its last six games — and need to bounce back order to win in the playoffs. Preparation is key.

“It is honestly a pretty normal week for us,” Koskie said.

“Playoff games are important, but they are just another game at the end of the day and we are going to have to prepare hard for it. We know it’s not going to be easy, so all possible game plans must be on the table.”

Despite having a talented roster, the Bisons’ record has been less than stellar, and losing more games than they win is not something the team can take lightly.

“Honestly, the overall season for us was not something that we were extremely happy with,” Koskie said.

“We played well and fought hard in some games overall, but did not get the results that we wanted. In a perfect world we would have not lost a game, but we need to take our experience this year and build on it.”

Still, a season filled with ups and downs makes for a good story, and Bison fans hope the team can go on a run.

Koskie and the squad is ready for a great matchup with the Wesmen and hopefully more after that.

“You can expect a hungry and motivated team next week for playoffs,” Koskie said.

“We are a team with a lot of drive and will to win and that is what we are going to instill into our game plan come playoff time.”

The Bisons compete in the first round of pool play March 4 to 6 at the Duckworth Centre.

From university to the pros