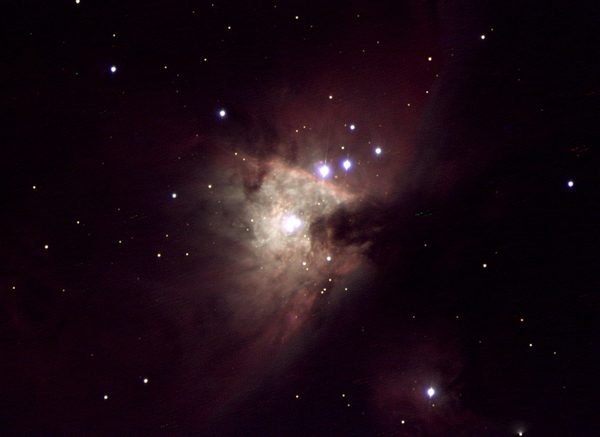 Photo by Scott D. Young, provided by the Manitoba Museum

As the pandemic enters the liminal space of being over politically yet scientifically very much ongoing, the Manitoba Museum continues its free and accessible online programming.

The Planetarium’s online DOME@HOME program will be continuing its weekly series into the foreseeable future, even with the possibility of a return to in-person events.

The host of DOME@HOME is the Manitoba Museum’s planetarium astronomer, Scott Young, who implemented the live online show when the planetarium first closed back in 2020 due to the COVID-19 pandemic.

“We sort of talk about what’s up in the sky, and where the planets are and any sort of celestial events that are happening,” Young said of the show.

“We also talk about any cool space stuff that’s going on, [like] the Mars landers, or rocket launches or things like that, stuff on the International Space Station. And as the show has sort of evolved, we’ve added topics.”

Streamed on the museum’s Facebook and YouTube pages, all shows are interactive. In fact, DOME@HOME has since become “kind of like a late-night talk show where you sort of either have a guest or you have a topic.”

Since DOME@HOME is a live show, there are “a lot of people in the chat asking a variety of questions about astronomy and other related kinds of things.”

“And so, it’s become this sort of back and forth with the audience which is really kind of fun,” Young said.

“It builds this community. We got about a hundred people watching every show live that, you know, I know half of them by name, and they are coming to our regular programs and signing up for our courses and making donations to the charity and things like that.”

What is important to Young about the program is how it uses a scientific field as accessible as astronomy to build a pro-science community.

“Astronomy is kind of like a gateway science because […] [people] just think of the beauty and the art and the mind-blowing part of it,” Young said. “We suck people in with the cool astronomy and if that makes them feel a little more comfortable with science in general, that’s huge.”

As for the aforementioned themed nights, DOME@HOME is set to cover light pollution for Earth Hour in an “awareness piece” for people to notice how their own activities affect the world around them.

“To get people to realize just how much light we waste in terms of just having unnecessary illumination at night — light that shines up into the sky instead of down onto the ground — and of course the associated energy costs,” Young said. “It’s an astronomy issue because of course astronomers have a hard time seeing with all the city lights.”

In Canada, billion of dollars are spent on electricity and it’s used to power light “that doesn’t do anything at all.”

“It doesn’t hit the ground and light up things, it basically goes straight up into the sky and bounces off the bottoms of birds and the bottoms of airplanes and that’s it,” Young said. “It’s totally wasted energy.”

For those who are just finding out about DOME@HOME for the first time, all past shows are available to watch in full on the museum’s YouTube channel.

The shows are packed full of references to news events and popular culture “from Star Trek to Elon Musk’s satellites.”

In particular, Young is passionate about the program because of astronomy’s accessibility.

“The best thing about astronomy is, it’s an accessible science,” Young said.

“You can go out and look at the stars and make discoveries. It doesn’t matter if someone else discovered the same thing like 400 years ago — when you discover it, it still feels like a discovery.”

And if you don’t have access to binoculars or telescopes, the program has you covered for upcoming celestial events.

“With DOME@HOME, when there’s something sort of cool coming up, we’ll do live telescope viewings, which we’ve done online so far,” Young said.

“The next one is probably going to be in May for the total lunar eclipse.”

Excitingly, “if [the pandemic] has calmed down [enough] that we can actually set up telescopes at the park somewhere, we will,” Young said.

But for those still apprehensive about going out, the Planetarium will “stream it online anyway,” meaning no one will miss out on what DOME@HOME has to offer.

Science vs. art, reality vs. meaning

Cultural healing after a corporate career