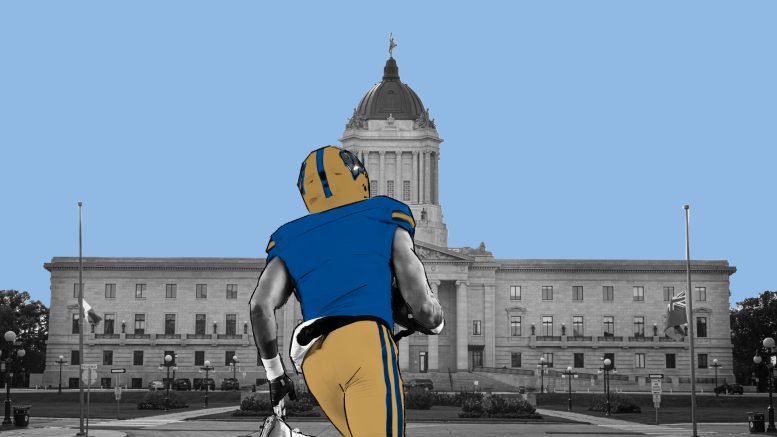 As the Progressive Conservative Party of Manitoba (PC) continues to lag behind Manitoba’s New Democratic Party (NDP) in province-wide polling, the Fort Whyte byelection could not have come at a better time for the traditionally conservative electoral division. The riding, which has remained vacant since the resignation of former premier Brian Pallister, is set to hold its election on March 22.

The primary candidates running for the position include Obby Khan representing the PCs, Willard Reaves running for the Liberals and Trudy Schroeder running for the NDP. Reaves and Khan are both former Winnipeg Blue Bomber players with little legislative background, while Schroeder is an experienced former board member for a plethora of organizations including Concordia Hospital, Manitoba’s arts and culture advisory council, Canada’s voluntary sector initiative and the University of Manitoba’s community leadership development program. Despite the PC and Liberal candidates’ lack of administrative experience, both are polling significantly better than Schroeder.

The Fort Whyte riding, which has been held by the PCs since its creation in 1999, has featured two PC leaders in its brief history. But the Liberal party is seeking to break the PCs’ stronghold. According to mid-January polling, Reaves is in a better position to win the Fort Whyte election than Khan. Reaves, who claims to have lived in Fort Whyte for 36 years, asserts the election should be an opportunity to send the government a message — that a change from PC legislative dominance over the last few elections is desperately needed. Recently, however, Liberals have been on the tightrope after releasing inappropriate merchandise in the form of a red dress — a symbol for missing and murdered Indigenous women — with the message “overthrow the government” on it. After the action was condemned by NDP house leader Nahanni Fontaine, the Liberals rapidly apologized on Twitter and removed the product from the party’s official website. But can the apology save its electability in Fort Whyte?

Likely due to the PCs’ predominance in Fort Whyte, its candidacy election featured three people seeking the nomination. After a two-day voting process, Khan won the bid. Despite having no legislative background, he describes himself as a community champion and, alongside Premier Heather Stefanson, vowed to place emphasis on issues like reducing surgical diagnostic test backlogs, strengthening the health-care and education systems, increasing immigration to tackle the labour shortage and leading Canada’s economic recovery.

Despite a significant social media following and community involvement, his nomination comes at a troubling time for the PCs as the party struggles to regain momentum following two horrific years of scandal and public criticism, particularly regarding its response to the COVID-19 pandemic. Furthermore, Khan’s nomination, just like Reaves’s, hints that the PCs and Liberals are trying to regain appeal among voters by putting forward popular, and subsequently electable, candidates rather than experts with public service experience.

While the Liberals and PCs chose appealing candidates, the NDP nominated a more-than-qualified candidate in Schroeder. Beyond her experience with several prominent boards and with Manitoba’s arts and culture scene, Schroeder has proved to be an advocate for COVID-19 vaccination while firmly standing against rhetoric and racism. Schroeder said she would abstain from participating in a community question and answer forum if Patrick Allard — an independent candidate who has ties to the People’s Party of Canada and their far-right anti-vaccine and racist ideals — was invited. Her record of public service clearly makes her the most prepared candidate to fill the Fort Whyte leadership vacancy.

Despite Schroeder’s track record, according to mid-January polling, she is polling last among the primary candidates, and the Liberals’ growing appeal among centre-left voters is not making her work any easier. Unless she is able to break away from the other candidates in a meaningful way, Fort Whyte looks like it is bound to have a former Blue Bomber as its MLA.

No shelter from this storm