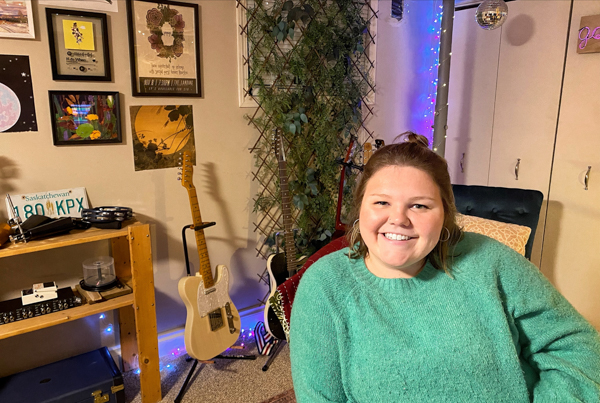 Despite recent strides, inequality and a lack of representation persist in the music production world. This field in particular is a very male-dominated space, with women representing only 2.6 per cent of producers credited on the highest-charting songs of the 2010s in America.

“There are so many factors for why we aren’t seeing as many women and gender-diverse people in music production — historically, men have been scouted, recruited or encouraged into technology-based jobs, leaving women to find ways in for themselves rather than doors [being] opened for them to walk through,” she said.

“It’s by no means impossible, and we’ve seen women climb to the top of these industries — Susan Rogers, Sylvia Robinson, Linda Perry — yet still, these women were anomalies.”

Even for those women set on a career in music production, Winterhalt feels there is a lack of community and support networks to help them get their start.

“There’s just so many white male producers, it’s easy to form a community. Many women and gender-diverse folks are producing music alone in their home studio with little to no community for support. It can be incredibly isolating, and [it is] harder to break into a pre-existing male-dominated community because ‘no one has heard of you before’ — you happen to be working alone, at home [or] in your basement.”

So, inspired by her fruitless search for a female mentor in the field, Winterhalt took it upon herself to build the community she wanted to see through the Good + Plenty Producer’s Club.

“Surely there were more of us out there and we just didn’t know about one another. The idea for some sort of ‘community’ came from this — we need to know who one another are, need to find mentors and be mentors and need to encourage one another in our growth,” she said.

Good + Plenty is a multifaceted initiative. First, there is a Facebook group exclusive to women, non-binary and trans-femme people in Manitoba.

Winterhalt said the Facebook group in particular has been used to “share resources with one another, opportunities for submissions or workshops with other organizations, [ask] questions about one another’s workstations or workflow and [start] introducing ourselves and making new friendships.”

Winterhalt also hosts a podcast under the Good + Plenty name.

“It’s me chatting with a woman, non-binary [or] trans producer or audio engineer from across Canada to talk about their creative process, how they got into audio and any encouragement for the next generation of producers,” she said.

The club is also beginning to look into putting on in-person events in the community, including technical workshops, mixers, collaboration days and other events tailored to the interests and needs of the group.

“The main goal is to create a strong community and network which was literally non-existent previously, and to ensure that wherever folks are in their journey they have every resource available to them for growth,” said Winterhalt.

“We want to ensure the knowledge is available and that everyone with the talent has an equal and fair shot for the same success.”