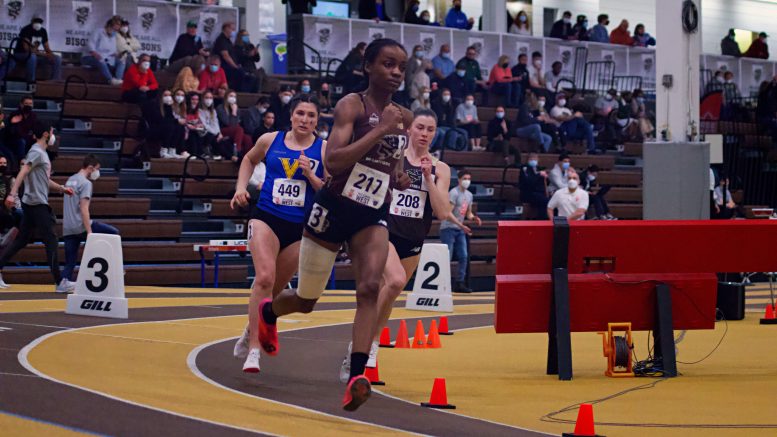 The University of Manitoba played host to the 2022 Canada West track and field championships this past weekend. The meet was a success for the Bisons — the women’s team impressed and the men’s team captured its first conference championship since 2009.

The Bisons did not waste any time getting to the podium on day one. Third-year athlete Anna McConnell captured gold in the women’s shot put, her best throw travelling 14.93 metres.

In the 800-metre relay, Darby Goodall, Hailee Morisseau, Chioma Nwagbo and Angela Kroeker finished with a time of 9:15.14, good enough for bronze.

In a gutsy performance, first-year hurdler Adam Andres narrowly won silver with a time of 8.484 seconds.

Taking home two medals on Friday, Calvin Reimer was a force to be reckoned with in middle-distance events. After winning bronze in the 1000-metre, he helped his 4×800 relay team to a third-place finish.

In his 25th year as the Bisons track and field head coach, Claude Berube was excited to see his team perform so well on day one. Although some athletes who were expected to place did not finish with medals, he was excited to see some surprise winners for the U of M.

“We had a good first day […] it’s always nice to get a couple of, I’ll call them unexpected medals, to start […] Generally speaking, the first day went well. There’s always couple hiccups, but we’re pleased with where we’re at,” Berube said.

Ranked fourth in all of U Sports, the Bisons men’s team was expected to make some serious noise at this year’s Canada West championship. Although the herd would be facing some tough competition from the University of Saskatchewan, the eighth-best school in the nation, Berube was confident in his group. He singled out a jumper and pointed to his sprinters when asked who he expects to have success on Saturday.

“Well, I think Daxx Turner is entered in two events, and he’s ranked first and second in those events,” said Berube.

“I think our relays are going to be exciting. Men’s 60 should be good, we could have hopefully three guys in the final. So yeah, I would say those are some of the main events we’re looking at […] We’ve got people basically in every event today which is nice and hopefully we’ll be able to capitalize on some scoring opportunities.”

Berube was not disappointed on Saturday.

Turner turned in an incredible performance. After previously placing fourth in the high jump, he dominated the triple jump the next day, beating his competition by .26 metres to win gold and Canada West male rookie of the year honours in the process.

As predicted, the Bisons sprinters were also outstanding. In the men’s 60-metre sprint, teammates Jordan Soufi and Brian Lewis finished second and third. Soufi then teamed up with Adam Chahid, Sébastien Régnier and Tyler Cox-Yestrau to win silver in the men’s 4×200 relay.

Tristan Allen also had an amazing Saturday. The St. Andrews, Man. native took home silver in the 600-metre race then helped his 4×400-metre relay team to a second-place finish.

After a long weekend competing in seven different events, Max Speiser accumulated 4,831 points to win silver in the men’s heptathlon.

On the women’s side, Eniola Adepoju soared 11.21 metres to finish third in the women’s triple jump while Jaylyn Deurbrouck tied for second in the high jump.

At the end of the event, the Bisons women’s team finished in fifth place with 59.25 points, with the U of S Huskies taking home the championship.

On the men’s side, the Bisons were crowned Canada West champions after racking up 140 points, 13.5 points more than the second-place University of Saskatchewan Huskies.

Berube was named men’s coach of the year, while his assistant Gee-ef Nkwonta was honoured for his role in the herd’s track and field championship.

After a successful conference championship, the Bisons will now head to Saint John, N.B. for the U Sports national track and field championships being held March 31 to April 2.

On the Hot Stove