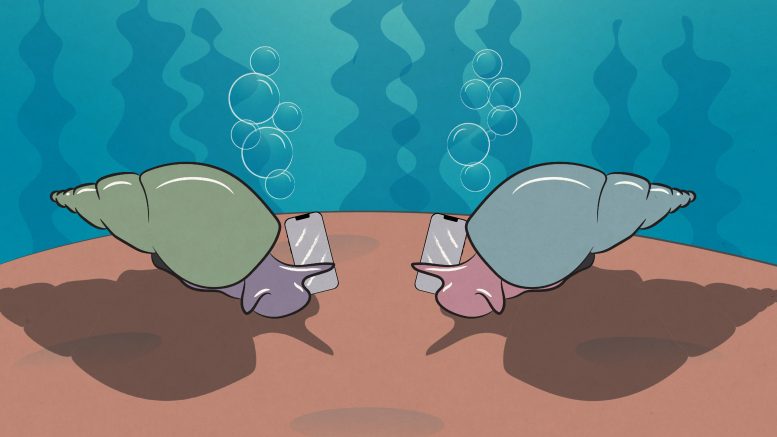 Chemical communication is everywhere in nature, giving all manner of organisms cues about their surrounding environment. Olwyn Friesen, a University of Manitoba postdoctoral fellow, is the lead author of a recent paper published in the journal Frontiers in Immunology that explores the role of chemical communication in wildlife groups.

Friesen and her co-authors used a series of experiments to investigate how specific chemical cues could change the behaviour of freshwater snails and make them more vulnerable to parasite infections.

The work is a result of a collaboration between several researchers which Friesen credits to providing many distinct perspectives. Senior author Jillian Detwiler — parasitologist and associate professor of in the department of biological sciences — began this work with Chenhua Li, alumna and current PhD candidate at the University of Calgary, during Li’s master of science degree.

Detwiler was curious about the methods through which parasites interact with and alter the behaviour of their hosts. To examine this question, she brought on collaborators in the fields of microbiology and biochemistry to share their expertise and provide input on the findings.

The breadth and diversity of chemical signals make studying them very complicated. An example of chemical cues that humans can understand is scent. Smells are mixtures of chemicals that help us understand our environment. For instance, the smell of smoke tells us that something is burning and that we should respond quickly.

Along with chemical signalling, many animals benefit from gathering in large groups. Vast herds of caribou help them to avoid predation, penguins huddle together to keep warm and southern right whales annually converge on their feeding grounds.

While there are benefits to gathering in large groups, there are also consequences. A bigger crowd means that each individual is more likely to encounter a pathogen. Pathogens like parasites can be more easily transmitted among densely packed individuals. From the parasite’s perspective, the chances of encountering its next host are better when its host is in a crowd.

The most efficient way to stay free of infection would be to ramp up immune activity in a large group and lower it back down as the group dwindles. This is known as density-dependent prophylaxis, or DDP.

Friesen and Detwiler wanted to determine whether freshwater snails, which are important hosts for many parasite species, exhibit DDP. They used a series of experiments to find out which chemical signals are involved in DDP and to determine if parasites can interfere with chemical communication.

First, they looked at whether snails increased their immune activity when in a group. They then identified which chemical signals in the water likely led to this response. They found evidence that fatty compounds called oxylipins changed the immune responses in snails.

Next, researchers compared the chemical cocktails of snails infected with parasites and those that were uninfected. The cocktails were distinct between the two groups, indicating that something about the parasite was causing changes in the signal released from the snail. Uninfected snails were sensitive to this change and increased their immune activity in response. For now, it is unclear who is producing the cue, whether it’s the parasite or the host.

These findings are exciting to Friesen and her collaborators because they demonstrate one potential avenue for parasites to alter the behaviour of their hosts. This research brings them a step closer to understanding the mechanisms behind these interactions on a molecular level. Friesen said this type of interaction is what drew her to parasites in the first place.

Even though parasites comprise approximately 40 per cent of all known living organisms on Earth, Friesen is constantly reminded of how little is understood about the impact parasites can have in a broader ecological setting.

Friesen’s interest in parasites stemmed from a moment in her undergraduate parasitology class. Seeing live flukes inside of a frog lung caused her to wonder about the complex relationship between these two animals.

“How are these two animals really living with each other?” she remembered asking.

This curiosity inspired her to pursue a career in parasitology, where she has devoted her academic career to uncovering the shades of complexity in community interactions.

Friesen would like to conduct further investigations into how changing environmental factors like increasing temperatures and pollution could affect these chemical-signalling systems.

“We live in a very complex world,” said Friesen.

“People are scared of [complexity], but I think our world is more beautiful because of it.”

U of M to apply for provincial child care grant