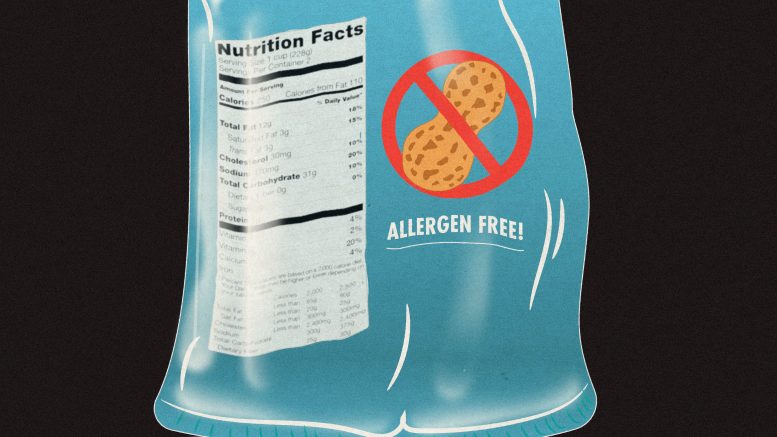 Families in Manitoba with certain food allergies experience food insecurity at a rate almost twice that of families without food allergies, according to a recent finding from research at the University of Manitoba. The study was conducted before the COVID-19 pandemic and the disparity is believed to have increased during the pandemic.

Jennifer Protudjer, endowed research chair in allergy, asthma and the environment and assistant professor in the department of pediatrics and child health, is recruiting participants for a study examining the intersection of food allergies and food insecurity.

Protudjer was previously involved in a project at Karolinska Institutet in Sweden as a post-doctoral research fellow which looked at the costs of allergies for the families experiencing them. This research included outpatients from an allergy clinic in Stockholm, Sweden. Protudjer found families were bearing a cost burden between $6,000 to $7,500 in Canadian dollars per year, representing a significant burden to families with allergies.

When Protudjer joined the University of Manitoba in 2018, she wanted to know if this phenomenon was happening in Manitoba and what could be done to reduce the financial burden. Prior to the pandemic, Protudjer found that families with allergies in Manitoba face an excess cost of $2,400 per year — about $200 per month.

“If that was happening at a time prior to the pandemic, when food prices were a bit more stable [and] unemployment was lower, what’s happening during the pandemic?” Protudjer said.

According to Protudjer, these issues, along with food shortages, have likely been exacerbated by the pandemic.

“Since the start of the pandemic, food prices have probably gone up close to 10 per cent,” Protudjer said.

“That’s 10 per cent on top of an additional excess burden that these families with food allergies were facing prior to the pandemic.”

One of Protudjer’s current projects is looking for low-income parents caring for a young child with a milk allergy to participate in the study. The project will deliver dairy-free food products on a biweekly basis representing a value of approximately $200 per month. The Protudjer lab will then attempt to determine whether this intervention improves the food security and mental health of the participants.

Protudjer’s research has made alarming findings regarding the extent of the financial impacts of living with allergies. At the beginning of the pandemic, families with an allergy to staple foods — including milk, egg or wheat — had nearly twice the difficulties finding foods that met their needs than families with allergies to non-staple food products.

Protudjer’s research also looks at the psychological impact of living with allergies. Protudjer has participated in research projects exploring this topic in Manitoba, nationally and internationally. She has found the psychological burden exists both for the person living with the allergy, their family and,by extension, their community.

“What we see is that families, particularly moms, have much lower health-related quality of life than moms of children who don’t have [a] food allergy,” Protudjer said.

“And that’s probably because it’s the parents who are taking on the burden for themselves.”

Protudjer’s connection with her research goes all the way back to the beginning. At two months old, she was diagnosed with an allergy to fish and shellfish.

“Growing up in Manitoba, as a largely landlocked province, it wasn’t difficult to manage,” Protudjer said.

“But certainly, it was uncommon when I was small to have any allergies. And as I got older, allergies were something that we discussed more.”

In fact, many people that have allergies are diagnosed early in life. According to Protudjer, allergies to milk and egg products typically appear first in childhood, often because they are the first foods to be introduced to infants’ diets. Other common allergies include peanuts, tree nuts and shellfish.

The prevalence of allergies is currently on the rise, but researchers are uncertain of the exact reason for this.

“Increasingly we see allergies to different seeds, such as sunflower seeds or chia seeds as well,” said Protudjer.

For this reason, more allergy research needs to be conducted. Protudjer suggests this research should be done in Manitoba.

“And so, if resources were unlimited, what I would love to do is have a centre for excellence, if you will, here in Manitoba.”

From legislation to action