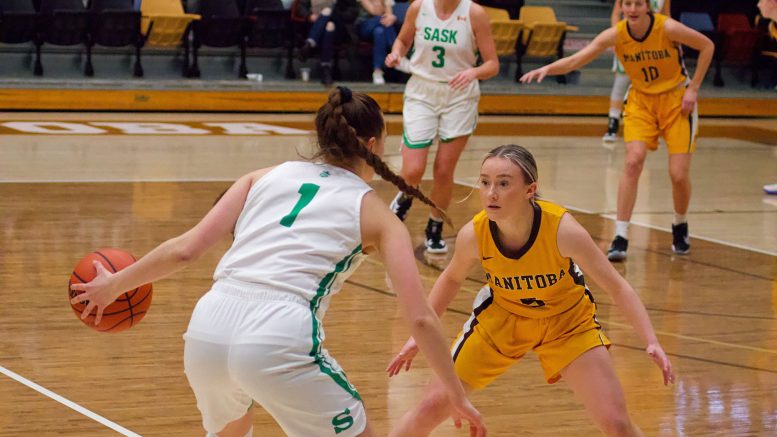 The University of Manitoba Bisons men’s and women’s basketball teams hosted the University of Saskatchewan Huskies in a two-game series this past weekend. Unfortunately for the herd, the Huskies were dominant, winning both games and spoiling the Bisons’ final home stand of the Canada West regular season.

On Friday night, the Huskies women’s team came out strong, leading by 10 points within the first five minutes of the game. Bisons Autumn Agar, Deidre Bartlett and Lauren Bartlett responded with four points each in the half. Outpacing the Bisons, the Huskies were led by guard Carly Ahlstrom. The third-year player put up 17 points in the first half, leading the Huskies to a 43-22 lead at halftime.

In the third, the Huskies continued to dominate, putting up 27 points in the quarter. Trailing by 30 points heading into the fourth, the Bisons were stillshut down by the Huskies’ defence. Without enough time to mount a comeback, the Bisons fell 94-50 to the eastern division leaders.

Speaking on her team’s dominant win, Ahlstrom said it was her team’s goal to have a dominant weekend in preparation for the upcoming Canada West playoff tournament.

“I think that our team had some goals going into this weekend,” said Ahlstrom.

“We’ve still got some big competition ahead so we’re just making sure that we’re doing the little things now in preparation and hopefully we can play our best when it matters most.”

Saturday marked the final home game Taylor Randall and Deidre Bartlett would play as Bisons. Prior to tip-off, fifth-year Randall was excited to play her final game in front of the Investors Group Athletic Centre crowd and work on her team’s game in preparation for the Canada West playoff tournament in March.

“It feels really special. I’m super excited to just go out and have some fun and just kind of take it all in,” said Randall.

“I think we’ve worked really hard all season and not every game has gone our way, but we know we have the pieces and we know that when we play good, we can compete against any team.”

The Bisons made a much more concerted effort in game two. After finishing down by 11 at the end of the first quarter, the Bisons began to rally in the second. Randall drained a pair of threes and Lauren Bartlett notched four points, helping close on the Huskies lead. Down by two heading into the fourth, the Bisons continued to hammer away at the Huskies’ defence. With less than a minute left, Agar laid a bucket in for the herd to make it a one-possession game. After a time-out, the Bisons had the ball on offence with less than 30 seconds on the clock. Unfortunately, the herd was unable to capitalize, missing two chances in a row and subsequently turning the ball over to hand the Huskies the final game of the weekend 58-55. Randall scored a team-high of 16 points, making the most of her final home game as a Bison.

On the men’s side, Friday night’s game was a back-and-forth affair. The first quarter saw both teams trading buckets, with the Huskies leading by three after 10 minutes. Appearing a bit out of sync in the first quarter, the Bisons’ offence began to click in the second. Leading the charge for the herd were Risto Zimbakov — who hit three shots from beyond the arc — and James Wagner, who added eight points and two rebounds to help give the Bisons an eight-point lead at the end of the quarter.

Each team kept pace with the other in the third, with the Bisons leading by four heading into the fourth. Although the herd attempted to increase its lead, the Huskies’ defence did its best to shut the team down. On the other side of the court, Huskie guard Marquavian Stephens caught fire, knocking down a three and going hard in the paint to lay one in and tie the game. After teammate Emmanuel Akintunde scored on a fast break to give the Huskies the lead, Stephens scored on all nine of his free throws in the quarter, giving Stephens a team-high of 25 points on the night and the Huskies a 66-61 win.

Prior to tip-off the following day, graduating Bison players Zimbakov, Cameron O’Hara, Keiran Zziwa and James Wagner were all honoured as they were also playing their final Bison home games.

Once the game started, Zimbakov got the herd off to a good start, draining three threes early to get the offence rolling. However, the Huskies quickly took over the game, stealing momentum and the lead from the Bisons. The Huskies limited the herd to four more points in the quarter and put up 24 of its own. The team continued its torrential pace in the second, scoring at will and gaining a 22-point lead with less than four minutes left, its largest of the game. In the second half, Bisons Zziwa and Wagner attempted to close the lead, but the Huskies continued to score at will, winning a fast-paced game 83-68.

The Bisons women’s and men’s teams’ next two games are against the Brandon University Bobcats Feb. 11 and 18, the final two matches of the Canada West regular season.