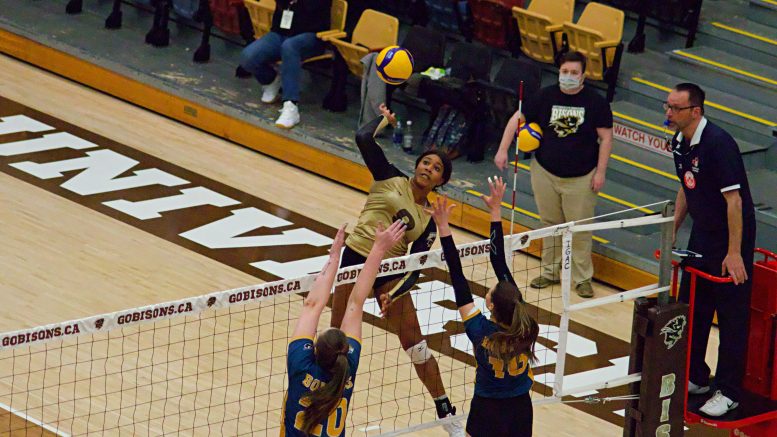 This past Saturday, the University of Manitoba Bisons men’s and women’s volleyball teams both hosted their first home games of the year against the Thompson Rivers University WolfPack.

The women’s team dominated, securing its first win of the season after a stellar performance by left side Light Uchechukwu, who was named player of the game.

The first set began with both teams going back and forth on quick scoring runs. However, the Bisons side would find its groove, making an 18-3 run and finishing the set with a score of 25-14.

The following two sets were nothing short of domination for the Bisons. The WolfPack was unable to score more than twice in a row for the entirety of the second and third sets. The Bisons won both, 25-18 and 25-11 respectively, to complete the three-set shutout.

Uchechukwu led the team with 12 kills along with four assisted blocks, an outstanding performance for which she was awarded player of the game.

“It’s so nice to have a home game,” Uchechukwu said in an interview after the game. “There was a really good crowd.”

However, the men’s team could not replicate this success, losing to the WolfPack in an exciting and close four sets.

It took some time for the men’s team to find a rhythm, beginning the first set down 11-6 and ultimately losing 25-16.

In the second set however, the Bisons managed to keep up with the WolfPack, with outside Eric Ogaranko netting three kills and a service ace to give the Bisons the set 25-22.

The following sets would spell heartbreak for the herd, unable to win in each despite having leads in both.

The Bisons began the third set going up 10-5. Unfortunately, the WolfPack went on a five-to-one run to cut the lead to one. The set remained a tight race all the way to the end, where the WolfPack would eventually take it 25-23.

The fourth and final set of the game was by far the most exciting, going into overtime. The set began with the Bisons once again jumping ahead to an early lead, however the WolfPack stormed back to tie the game.

The remainder of the set was packed with quick scoring runs, with each team losing and reclaiming the lead, and the Bisons tying the game 24-24 forcing overtime play.

A couple rallies later, the Bisons had the lead 26-25, only needing one more point to win the set, and possibly extending the game. Unfortunately for the herd, the WolfPack reclaimed the lead for a final time and on a thrilling final volley, took the game with a kill by Rylan Ibbetson.

Service errors were the Bisons downfall, with 20 to Thompson Rivers’ 15.

After the game, head coach Arnd Ludwig said that the missed serves restricted them offensively, not allowing the team to do what it does well.

When asked about what put the WolfPack over the edge in close sets, Ogaranko stated that the Bisons’ inconsistency resulted in the loss of close sets, adding that the team’s energy was “up and down.”

The Bisons men seemed to take their coaches feedback to heart after the home opener as they stormed back on Sunday to beat the WolfPack in three straight sets, matching the women who once again stampeded over Thompson Rivers with another three-set stomping.

The women’s team has improved to 2-2 on the season, and the men’s to 1-3 after the weekend.

Both teams are set to meet with the UBC Okanagan Heat in British Columbia Nov. 4th and 5th.

Shooting for the top