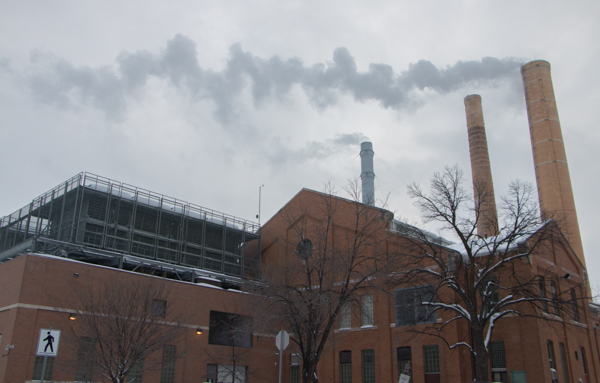 The University of Manitoba has announced plans to reduce its reliance on natural gas in an effort to curb greenhouse gas emissions. Kale Kostick, projects coordinator for the U of M Office of Sustainability, said long-term plans are being explored for alternatives to natural gas to heat buildings.

Currently, the university has a district energy heating system, which uses natural gas to heat and cool buildings on campus. In this system, the Fort Garry campus’s Central Energy Plant provides steam by burning natural gas to generate steam. A series of pipes then carry the steam to all buildings, where it is released to heat the rooms.

Natural gas is a clean-burning fossil fuel. When burned, it releases only carbon dioxide and water vapour, unlike coal or oil, which release high amounts of harmful byproducts that contribute to air pollution. While burning natural gas may be cleaner than burning fuel oil, it remains the largest source of greenhouse gas (GHG) emissions for the university, since carbon dioxide and water vapour contribute to the GHG effect, trapping heat in the atmosphere.

The university’s most recent GHG footprint was a total of 57,000 tonnes of emissions in 2019, according to their baseline data. Roughly two-thirds of those emissions, or 37,000 tonnes, were from building operations, mainly the use of natural gas to heat buildings. Energy efficiency measures such as pumps for heat redistribution and heat recovery ventilators in certain buildings have reduced emissions since the 1990s, but more must be done to meet proposed targets. The phasing out of natural gas plays a large role in the university’s sustainability strategies over the next 30 years.

“The goal is to hopefully wean ourselves off of that natural gas usage,” said Kostick.

Some potential options to replace natural gas have been proposed, including anaerobic digestion. Anaerobic digestion refers to the process by which microorganisms break down organic substances in an environment without oxygen. The end result of the breakdown is the generation of methane, carbon dioxide, water vapour and other gases which can be used as an energy source. Various organic materials can be used, including biosolids from sewage treatment and food waste from landfills.

The more likely and viable option at this time is that of switching to landfill gas combustion from the Brady Road Resource Management Facility, previously the Brady Road Landfill. This plan would rely on the Brady facility’s methane gas collection system. The gas would be captured and sent to the university campus to be combusted in place of conventional natural gas, instead of being burnt on-site.

Implementing either option would come at an increased cost compared to the current system. However, the price of natural gas has been on the rise and is forecasted to increase in the years to come. This has altered the calculus behind decisions to switch to landfill gas, as it may make more financial sense in the long term.

These options, while producing markedly fewer carbon emissions than burning coal or oil, still fall below the standard of a completely electrified system. Currently, Manitoba Hydro does not have the capacity to support a switch from natural gas to electricity for heating.

In 2020, the U of M joined over 1,000 global universities in signing the Universities and Colleges’ Race to Zero campaign letter, pledging to attain net zero GHG emissions by the year 2050. The campaign was established by the United Nations Framework Convention on Climate Change to encourage governments, people and industries to create plans for climate resilience.

The U of M reached out to consultants and has been working with them over the past year to create a climate action plan to reduce GHG emissions by 50 per cent in 2030 and 100 per cent in 2050. Natural gas plays a large part in these plans, but the larger aim is to ingrain sustainability into policies and processes for the future.

Kostick is confident about the direction the university is taking. Only time will tell if the U of M holds true to its pledges, but meanwhile, the first steps toward a carbon-neutral campus have already been taken.

“The university has embraced sustainability as a very holistic feature,” said Kostick.

Arbitrator rules U of M must increase salaries for UMFA