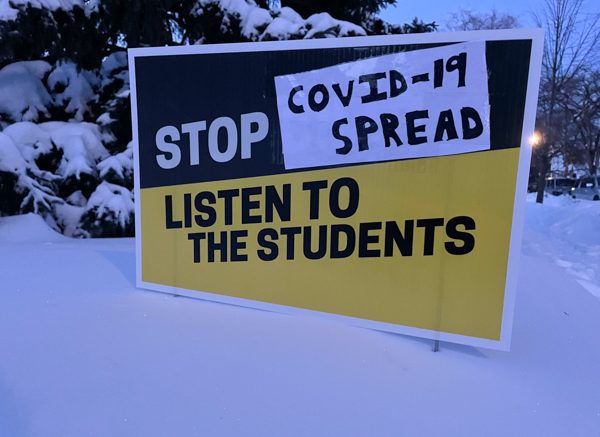 ‍Organized by the group MB Students for COVID Safety, the walkout’s demands included the option to return to remote learning if students wish and increased funding for safety measures for those who prefer in-person learning.

Brie Villeneuve, a student at Grant Park High School and one of the organizers of the walkout, explained what students were hoping to achieve.

“We want KN95 or just N95 masks for all students and staff, we want filtration to be improved [with] HEPA [filters], we want the contact tracing to be put back into place and we want rapid tests for all high schools and middle schools as well.”

Villeneuve is immunocompromised, and although they have been worried, they take extra precautions and have felt relatively safe at school during the pandemic — until now.

“With the Omicron surge coming up, I feel way less safe and there’s no new safety measures being implemented,” they said.

Organizers say as many as 90 schools participated in the walkout, including Maples Collegiate, Gordon Bell, Grant Park, Collège Béliveau and Collège Louis-Riel in Winnipeg.

Participation ranged from dozens of students at some schools to only a few at others.

Villeneuve said the walkouts had received a number of different reactions, but the response has been mostly supportive.

“Even if they disagree with the idea of remote [learning], a lot of people respect the fact that we’re standing up for what we want,” they said.

Some school administrators, such as Kelvin High School principal Tim Cox, were empathetic, saying in a memo to parents that students had the right to protest peacefully.

Administrators at Collège Louis-Riel, on the other hand, stated students would be marked absent if they participated, as neither the school nor the division had sanctioned the walkout.

“The benefits of in-person learning are significant and we are working towards balancing between slowing the spread of the virus and ensuring as many children and youth can access in-person learning [as possible],” said Wayne Ewasko, minister of advanced education, skills and immigration, in an email statement.

“Cases in schools tend to mirror rates seen in the community and have been shown to be at overall lower risk for transmission […] Manitoba schools have layers of protection in place including a rapid testing program for asymptomatic teachers, staff and kindergarten to Grade 12 students (over 700,000 tests distributed), an additional five million masks being distributed (over 10 million distributed in 2021-22) and ventilation assessments and improvements that schools have been implementing for over the last year.”

‍The province recently announced its ability to contain the spread of the Omicron variant is “limited” and that every person in Manitoba is likely to be exposed to the virus.

‍Additionally, Dr. Brent Roussin, Manitoba’s chief provincial public health officer, said the speed at which the Omicron variant spreads means it is impossible to eliminate the risk of the virus in schools.

“Just because everyone will eventually get it, if that’s true, doesn’t mean that we need to all put ourselves into that position right away, as that could really overwhelm our health-care system that’s already struggling, and we don’t want […] mass spread,” Villeneuve said.

While Villeneuve said they appreciated the government’s choice to delay the start of in-person learning by one week, they knew little would change.

“Our government said that the reason for it was so they could implement more safety measures and stuff like that, but they couldn’t do [what they didn’t] in two years in a week.”

U of M hosts seminar on forced organ harvesting in China

U of M continues with tuition increase during pandemic