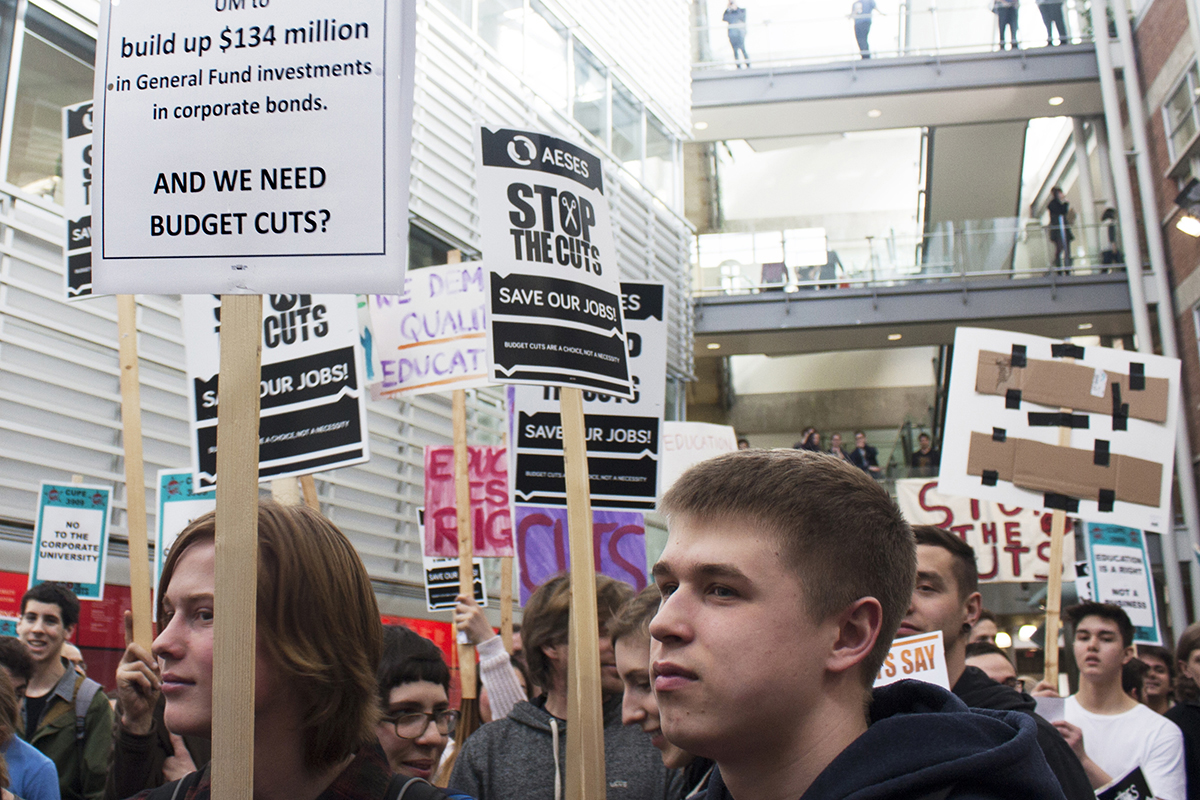 The modern student movement, namely the Canadian Federation of Students and their ilk, has accomplished something that is at once absurd and increasingly detrimental: they have transformed university students, one of the most privileged groups of people in society, into a revolutionary class.

But they do not seek to lift suffering individuals out of poverty or help give them a leg up in the job market so they can raise families and fulfil their goals.

The condescending rhetoric of the modern student movement scoffs at the notion that a university education should have any direct connection to the practical realities of the Canadian economy. Virtually any discussion of private sector job prospects and more practical approaches to education is met with idealistic intonations about the “inherent value” of a university education.

Rather, the modern university that has captivated the imagination of striking students in Quebec and marching student activists across the country is a publicly funded refuge from the harsh fiscal and socioeconomic realities of the modern world.

Given the historically close, but increasingly bizarre, relationship between student and faculty unions, members of the student movement dismiss any argument that the ratio of teaching and research for tenured faculty may need to be readjusted to ensure that more students receive first-rate instruction in a period of increasing enrolment. After all, questioning the compensation or labour practices of high-paid faculty is the equivalent of union-busting and facilitating a neoliberal agenda.

University research, so long as it does not serve private and monied interests, is an inherent good. As such, the only solution to the increasing use of sessional instructors is to make those instructors tenured faculty.

Furthermore, not only does the student movement want universities to remain eminently public and elitist when it comes to high-level academics, they also want Canadian campuses to provide a vast array of social services. They want cheap and easy access to a state-of-the-art gymnasium, fully subsidized counselling services, a daycare centre, a subsidized universal bus pass, a fall reading week, a dental/health plan, and a well-staffed human rights office.

And if you open a restaurant or a bar on campus, it better serve organic, locally-sourced, vegan options. It shouldn’t be associated with a big American franchise or corporation, either.

All of these expectations come with no price tag. After all, members of the student movement are unwilling to pay any more money in tuition, and many of them espouse the virtues of a completely subsidized post-secondary education. If they are to incur any debt at all, it should be interest-free and with little to no strings attached.

Beyond the clear financial cost of this laundry list of demands (most of which have been met), the real damaging part of the vision of universities advanced by the student movement is the extent to which it is divorced from the actual needs of the silent majority of students.

At the risk of over-generalizing, in my experience most student union and activist groups are populated with left-wing humanities students whose parents are funding their education or who have incurred some form of government student loan debt to pay for it. They have prioritized student politics over their academic careers and are proponents of a fantastical ideal of openness and accessibility, where students can take as many or as few courses as they’d like in whatever subject area piques their interest, paying as little as possible to do so.

In short, when members of the student movement take to the streets, they are largely defending their own interests. One of the best examples of this fact is the continued insistence by the student movement that tuition freezes and other financial relief policies should apply to every student across the board, regardless of background and family income. The same progressive activists who rally in favour of higher corporate taxes and high-income taxes for wealthy Canadians do not extend that progressive outlook to the children of lawyers and business executives.

This broad vision of post-secondary education policy has been followed, almost to the letter, by the Manitoba New Democratic Party (NDP), which is reliant on the student movement as a talent pool of future campaign volunteers and staffers. And it is these policies that have sowed the seeds of the University of Manitoba’s current budgetary woes.

The NDP under Premier Gary Doer instituted a decade-long tuition freeze in 1999 that helped starve universities in the province of a major source of long-term, stable funding. After allowing fees to increase by 4.5 per cent in 2009 and five per cent in 2010, the NDP capped tuition at the rate of inflation, where it has remained since 2011.

As compensation for low tuition, the government promised to increase their operating grant by five per cent a year for the next three years. They reneged on that commitment in 2013, increasing the operating grant by 2.5 per cent in each of the last two years.

In an environment where tuition is capped at the rate of inflation and government grants barely exceed inflation, the University of Manitoba Faculty Association negotiated a collective bargaining agreement for 2013-16 that built in a 6.9 per cent salary increase.

While on the surface it appears that the university breaks even (or comes close to it) in this scenario, looks can be deceiving. The 6.9 per cent negotiated increase is not only an automatic base salary increase over three years, it applies to salary increments based on set thresholds as well. Additionally there are other financial incentives, like recruitment and retention market adjustments, built into the collective bargaining agreement. In short, faculty salaries remain an increasing drain on finances at the University of Manitoba.

And despite burgeoning class sizes and increasing reliance on sessional instructors, a significant portion of faculty salaries is paying for research output.

Hearing the faculty union tell it, however, one could be forgiven for believing that the university’s administration is raiding annual operating surpluses to fund superfluous marketing and capital expenditures.

But the marketing campaign for the U of M has clearly been driven in large part by the need to raise funds from private donors. Given the university’s $500-million Front and Centre fundraising campaign, is it any wonder that the Trailblazer ads seek to tug on the heartstrings of potential U of M alumni donors?

Furthermore, given the laundry list of expectations inherent in the agenda of the modern student movement, and the projected $300 million worth of deferred maintenance costs at the university, transfers to capital expenditures are hardly the kind of indulgent expenses that the faculty union makes them out to be.

There is nothing unique about the budgetary challenges facing the University of Manitoba. Post-secondary institutions across the country are facing similar challenges as they grapple with how to live up to the changing expectations of students and the evolving Canadian economy. There are no easy answers and major reforms will be necessary.

However, major reforms cannot fall on the U of M administration alone. Ultimately, it needs a dance partner in order to have any legitimacy. But with a student movement and a provincial government demanding virtually everything under the sun without paying for it, there is a significant gap in practical post-secondary policy leadership in Manitoba. At the U of M, that gap is being filled with survival tactics and austerity measures.

Injustice will not lead to justice