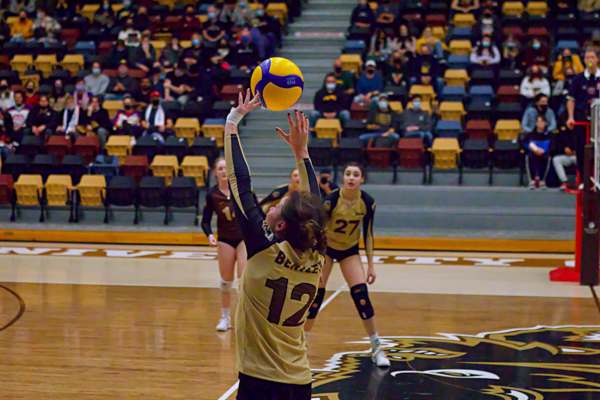 The University of Manitoba Bisons volleyball teams played their last series before the winter break at Investors Group Athletic Centre this weekend. The women’s team faced off against the University of Regina Cougars, while the men’s team played its crosstown rivals — the University of Winnipeg Wesmen — with both teams winning and losing a game apiece.

Game one on the women’s side was a close one. The match went the distance with five sets being played, resulting in the U of R’s second win of the Canada West season. After taking the first set 25-23, the Bisons would lose the second 25-17. In the third, the herd found themselves down 24-22 but battled back to tie. Each team would trade points throughout the set, with the Bisons coming out on top 33-31. In the fourth, the Bisons found themselves tied with the U of R at 24 apiece. A Cougars kill by Caitlyn Spurr and an ace by Devyn Grimsrud would secure the set for the U of R, sending the match into the fifth set. The Bisons would commit six errors, easily giving the Cougars the set 15-10 and the match 3-2.

Cougars libero Sierra Parris-Kruger led the Cougars with 19 digs in the game. After her team started the Canada West season with three straight losses, the fourth-year player said she and her team took advantage of a two-week break from competition to regroup and bounce back with their second win.

“We’ve been working really hard in the past two weeks off here to just rally when things aren’t going well and just kind of push through,” said Parris-Kruger.

“Honestly, the [time off] was really beneficial and we got to kind of just work on ourselves and not worry about any other teams.”

The Bisons women’s team would come out on top in its second match of the weekend, winning three sets to one. After losing the first set, the Bisons rallied, winning the next three in a row.

Although Hoeppner had an impressive performance, she credited her teammates for her success in helping win their first game since Nov. 6.

“I feel like we came together really well […] even if I was making mistakes, my team kept on bringing me back.”

The Bisons men’s team put on a dominant display in the first match, winning three straight sets to take game one on the weekend.

Spencer Grahame led with 15 kills for the herd, while teammate Ben Carleton had 11. For the Wesmen, Canada West kills leader Daniel Thiessen was held to only 10.

With the win, the Bisons’ season improved to 4-3, eclipsing the .500 mark for the first time since Nov. 12. Bisons fourth-year Owen Schwartz credited his team’s work ethic for helping them capture their fourth win of the season.

“I think it’s been a lot of the work that we put in the gym,” said Schwartz.

“You know, guys are improving in a lot of their weight training areas and we’re working really hard every day in practice, we’re going four [to] five times a week. I think just grinding […] is what gives us that little extra push and we can go into the extra sets and [win] the extra points.”

Friday’s win against the U of W was the Bisons’ second straight game against the Wesmen where the herd was victorious in three sets. Schwartz said playing against a rival like the U of W brings the best out of the Bisons.

“[They’re] crosstown rivals. You always have a little chip on your shoulder when you’re playing a same-city team,” said Schwartz.

“The fact that we know these guys really makes us want to push that much harder and beat them.”

Although the Bisons dominated the Wesmen on Friday, the U of W was firing on all cylinders Saturday.

The Wesmen convincingly took the first two sets 25-18 and 25-16. The Bisons attempted a late comeback by winning a dominant third set 25-15 but fell apart late in the fourth — once again losing 25-16 — giving the match to the U of W. With the win, the Wesmen improve its record to 5-3, good for first in the eastern division.

The U of W’s Daniel Thiessen notched 13 kills on Saturday, putting him at 130 on the season, while teammate Nigel Nielsen had a game-high 14.

The Bisons women’s and men’s volleyball teams return to Canada West competition against the University of Winnipeg Wesmen Jan. 21, 2022 at Investors Group Athletic Centre and Jan. 22 at the Duckworth Centre.

The best in brown and gold: 2013-14 Bison student-athletes’ contributions celebrated