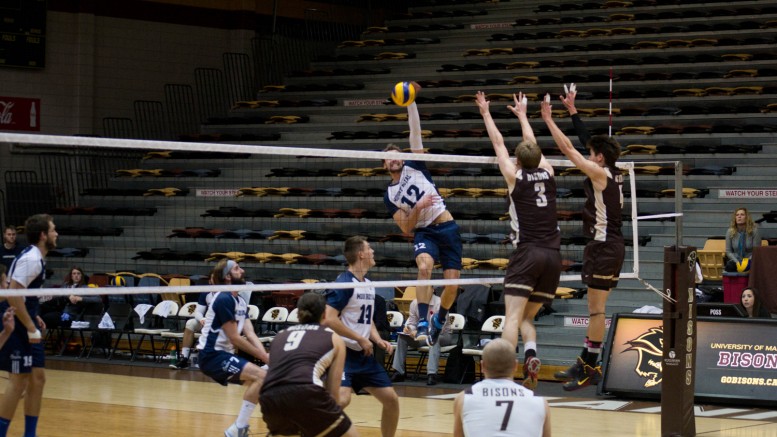 This weekend, both the Bisons men’s and women’s volleyball teams went head to head against the Mount Royal Cougars. The men swept their two matchups against the visitors, maintaining their perfect record. The women didn’t fare so well, as they dropped both of their games.

Men continue to win
The Bison men’s volleyball team has not lost a single game this season, and has only dropped six sets all year. They kept their winning ways alive against the Cougars.

Friday’s game was tighter than the 3-0 score line suggested, as the Bisons had to fight back in both the second and third sets.

Head coach Garth Pischke talked post-game about the third set on Friday, where they battled back from a five-point deficit.

“We kept our composure on servicing and we came up with a couple really good blocks,” Pischke said. “We slowed them down and that gave us momentum and kept us in it.”

Right side hitter Devren Dear dominated the early proceedings for the herd, collecting five kills in the first set, and then collecting another six in the second. He finished with 15 on the night.

Adam DeJonckheere led the line in the rematch, earning 15 kills. Luke Herr came up with seven digs, while Dear had another stellar day, recording nine kills and six digs.

The two wins help the men improve to 8-0 and first place in the Canada West conference. They are currently the hottest team in the West, as they are one of only two undefeated teams in the conference.

The men are on the road next weekend against the University of Alberta Golden Bears. The Bears are the only other undefeated team in the conference, so it’s sure to be an entertaining matchup.

Women get clawed by the Cougars
It hasn’t been the greatest of starts for the Bisons women’s volleyball team, as they sit with a 1-7 record and second-last place in the Canada West.

Mount Royal recorded seven more blocks than Manitoba, which really helped their efforts in bouncing back. Despite the loss, middle hitter Jordana Milne had herself a strong evening, as she led the herd in kills, aces, and blocks.

Manitoba only managed three blocks all game, compared to Mount Royal’s twelve. They were outscored 72-46 and were never really in contention.

Sophomore Tori Studler had 11 kills on the day – two shy of her season best, while Caleigh Dobie was clutch once again, recording 14 digs.

The women hit the road as well next weekend to face off against the University of Alberta Pandas. Alberta sits tied for first in the Canada West with a 6-0 record.