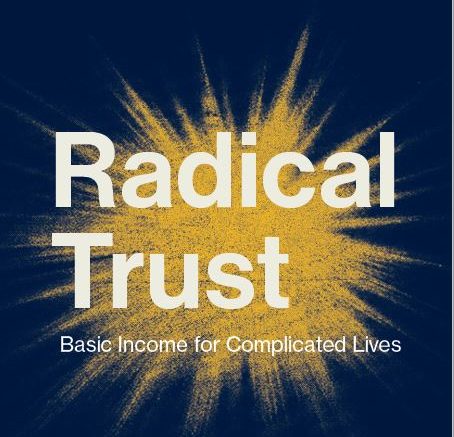 Forget points to the Canada child benefit, aimed at children, and the guaranteed income supplement and old age security, aimed toward older adults.

“The great gap in system is for 18 to 64-year-olds, working-age adults,” Forget said.

Radical Trust addresses the preconceived notion that if you are a working-age adult and living in poverty, it must be your own fault. Forget drew from her previous research in basic income and Owczar’s experience in journalism to produce a compelling case for basic income as a tool to address poverty in Canada. In the course of writing the book, the authors found the contributing factors of poverty are deeply interconnected.

“In our minds, we had this book set out into tidy little chapters,” Forget said.

“‘We’re going to write this chapter about kids who are aging out of the foster care system.’ Well, you start writing about that and the next thing you’re into substance use and you’re into homelessness […] you’re into violent relationships.

“You’re into all kinds of things because none of them are separate.”

Forget has been researching basic income since the Mincome project in the 1970s, when she was an undergraduate student. The Mincome experiments took place in Winnipeg and Dauphin. As Forget explains, in Winnipeg the project was run as a randomized control trial with separate control and treatment groups. The minimum income was also offset by traditionally earned income. While no official report was published on the study, economists at the U of M published their own analyses.

The experiment sought to determine if a guaranteed income would result in more or less paid work.

“There were two groups who did work less,” Forget said. “New mothers and […] young, unattached males.”

An article Forget published in 2015 suggests that new mothers used the guaranteed income to “buy” themselves a longer maternity leave. Interviews with young, unattached males suggest that they pursued education, rather than employment, when offered a guaranteed income. Forget also found that high school graduation rates surpassed 100 per cent, as previous dropouts returned to complete their diploma.

One of the starkest findings was that hospitalizations fell 8.5 per cent in the Dauphin treatment group.

“You don’t have to spend a lot of time walking around that hospital to realize that a lot of our health care is going to support the consequences of poverty,” Forget said.

“When you’re a health economist, you’re always focused on costs […] and you realize you’re spending so much money to deal with people when they’re in the state of crisis. It’s hard not to think about whether you could be investing a little bit of money upstream and preventing some of these issues from occurring in the first place.”

Forget and Owczar became connected through Basic Income Manitoba. Owczar worked at Basic Income Manitoba as a communications specialist and Forget was on the board of directors. Forget hired Owczar to conduct interviews and help tell the stories of people affected by poverty for a basic income book project she was working on at the time.

“We put people with lived experience of poverty at the forefront of each chapter,” Owczar said.

“We felt that they were the experts in the realm and they could really tell us how the system was or was not working for them.”

Some people interviewed for the book had successfully transitioned out of poverty and wanted to provide their insight into how social systems have worked for them.

“What they needed was money to be able to spend in their own way to address their own needs — and that’s something that our social assistance programs have largely failed to do,” Owczar said.

The title of the book refers to the radical trust one must place in people to allow them to decide for themselves how to best live their lives.

“I hope that in reading these stories, people can have a better sense of empathy for folks,” Owczar said.