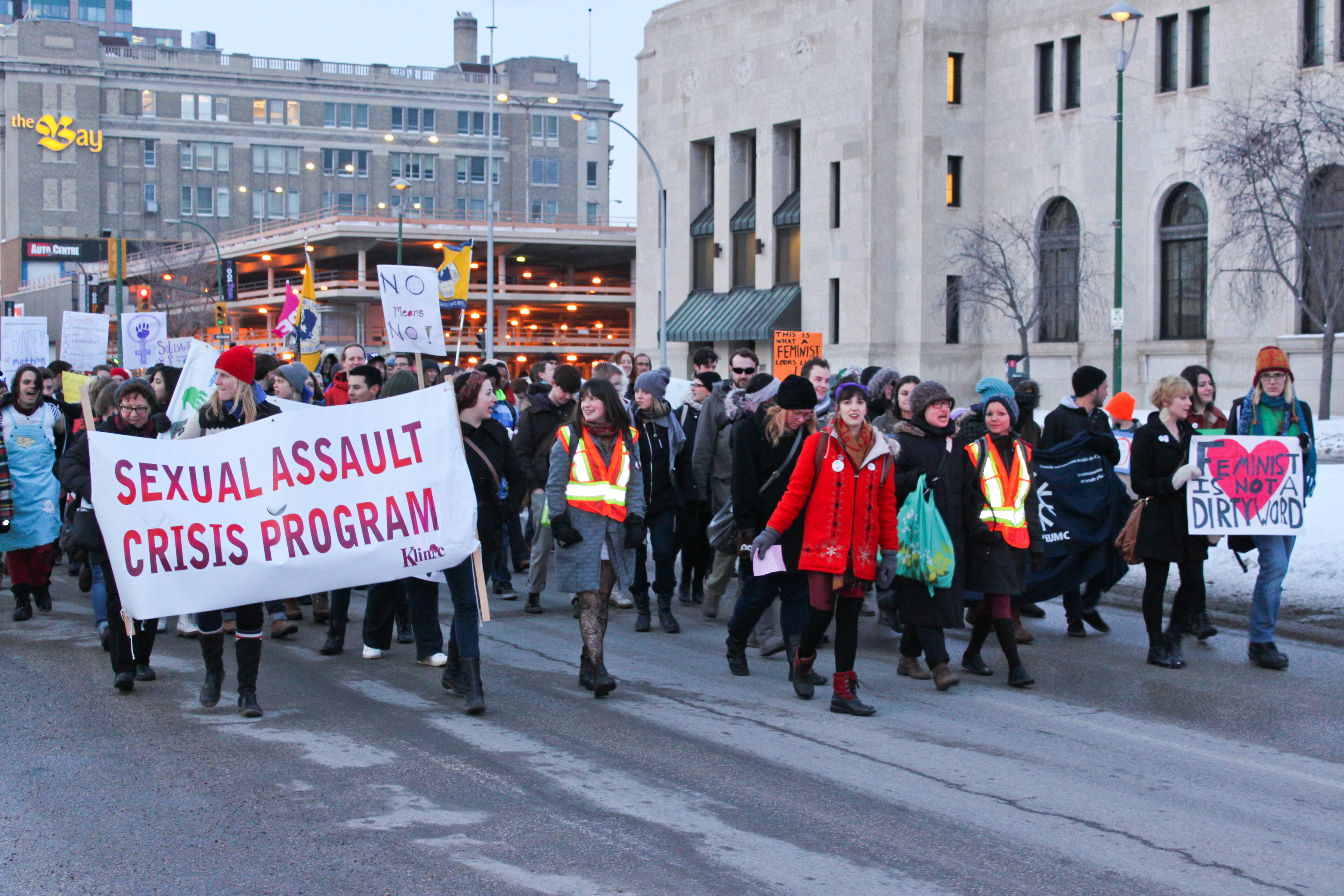 Both women and men marched down Broadway Avenue on Friday, Mar. 8 for International Women’s Day. Participants chanted phrases such as, “two, four, six, eight, we’re the ones that ovulate,” while holding signs that read, “Resistance is fertile” and “Feminism is not a dirty word.” The crowd gathered to celebrate how far women have come in their fight for equal rights, but also brought attention to what still needs to be changed.

Chickadee Richards, an activist for Indigenous women, raised several issue of inequalities facing Aboriginal women. It is estimated that over 600 Indigenous women have been murdered and missing since the 1960s.

Richards shared a story of a man who came up to her and her daughter and asked them how much a sexual act would cost. Richards said that this man’s comment assumed an inherent association between being an Aboriginal woman and a sex trade worker. She said this incident opened her eyes to the fact that Indigenous women are not safe on Canadian streets.

Jazmine Papadopoulos from the University of Winnipeg spoke about the importance of self-care. She said that many feminists are often burnt out from activities and joining so many organizations, and need to take time to relax.

For many women, taking time to care for themselves after years of caring for others creates self-criticism and the belief that they are not doing enough. Yet, Papadopoulos added that this is the basis for creating change. According to Papadopoulos, you need to take care of yourself first, so you can be a good example and care for others.

“A state of hopelessness is not going to help anything. Take time to tell others you love them.”

Charly Wreggitt, coordinator of the Womyn’s Centre at the University of Manitoba, spoke to the Manitoban about the need for feminism to make a return. She said that we are still living in a misogynistic, patriarchal society.

“Many people seem to be under the impression that we live in a post-feminist world where women already have equal rights,” said Wreggitt. “There needs to be awareness on the issues women still face and the violence committed against women each day.”

UMSU president Bilan Arte attended the march for the third year in a row and spoke about violence against women. According to Arte, 51 per cent of women still experience assault and every six days a woman is killed by her partner. These numbers, she said, are skewed since they do not include women who have immigrated here from other countries. These surveys also create barriers for many women, as they are only available over the telephone and in French or English. Arte said there is a need for a government that is dedicated to ending violence.

Arte spoke of women around the world and in Canada who are still victims of sexual and domestic abuse. Human trafficking, child brides, and high infant mortality rates are still highly prevalent issues. Additionally, prenatal healthcare is not readily available to women of a lower socioeconomic status, even in developed countries with advanced healthcare systems.

“In Canada, the high numbers of missing and murdered Aboriginal women shows how much we still need to fight and shows the extreme racism, sexism, and colonialism present in our society,” said Wreggitt.

The march concluded this year’s International Women’s Week celebrated at the University of Manitoba. The week included different events such as meditation, a discussion about how to love yourself, DJ lessons, and monologue presentations. Put together by various feminists and women’s organizations across the city, the week’s theme was solidarity and all individuals were encouraged to attend the free events.