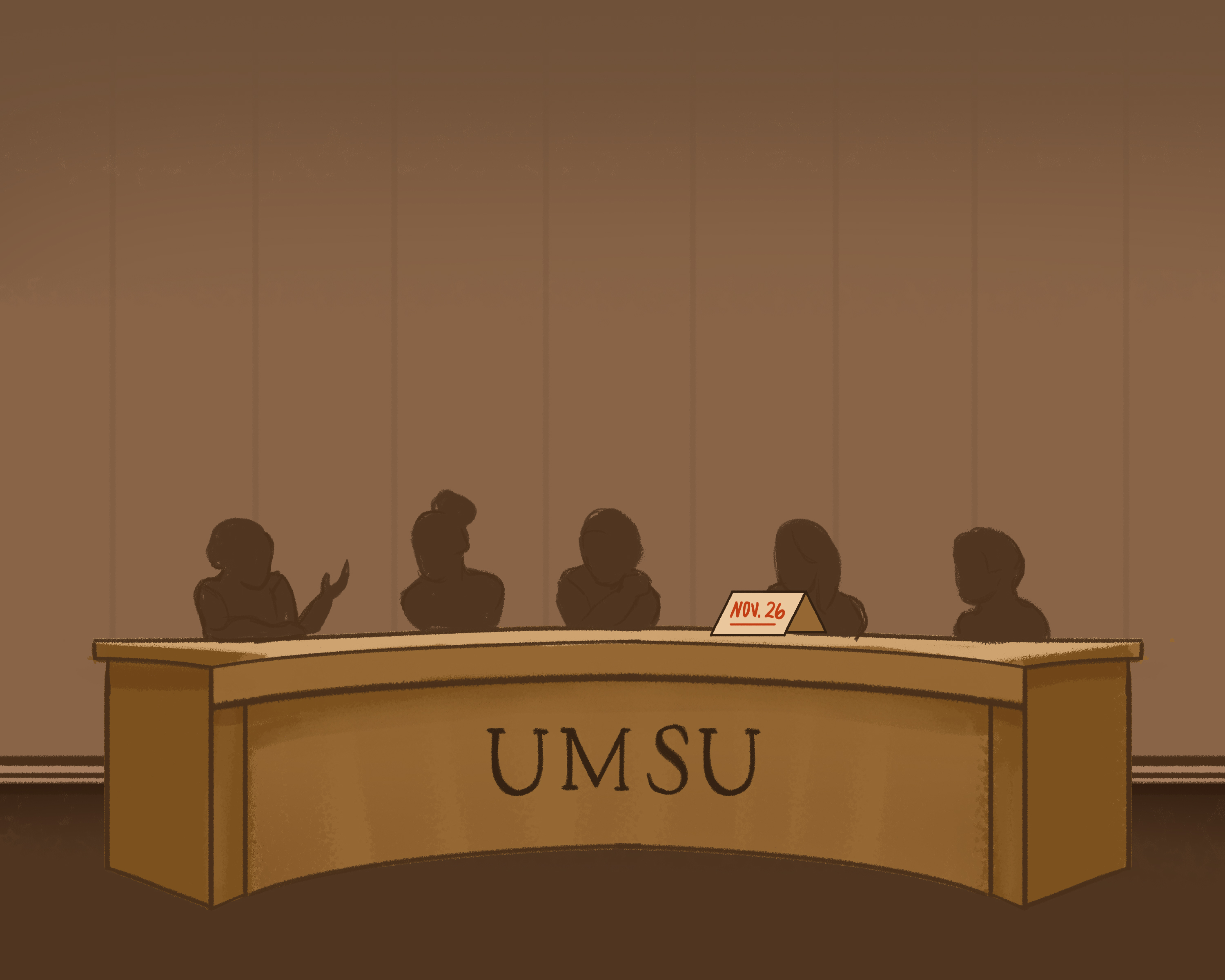 At its Nov. 26 meeting, the UMSU board of directors received presentations from the Canadian Federation of Students and the U of M student senate caucus. The board also defeated a motion reaffirming UMSU’s membership in the federation.

UMSU vice-president advocacy, Kristin Smith, presented to the board on behalf of the student senate caucus about ongoing advocacy efforts to improve student experiences with online learning and to encourage an environment for “student success.”

The caucus is advocating for the implementation of a “compassionate grading scheme.”

If implemented, the university would allow for the possibility of excluding one final grade from GPA calculations in each term, an extended voluntary withdrawal deadline and more compassionate guidelines for authorized withdrawals.

“But we don’t want compassionate grading to be the permanent solution. It’s just simply not a tenable solution.”

The senate caucus has submitted a set of five recommendations to be reviewed by the university’s COVID-19 recovery steering committee which, if enacted by the U of M senate at its next meeting on Jan. 6, would take effect for the winter 2021 semester.

Among the recommendations are a requirement that professors and instructors post recordings of their lectures, or at least annotated slide shows of lectures, on UM Learn to address concerns of inaccessibility for students with poor internet connections.

The second recommendation is adding the requirement that environmental scans — in which the software scans the room a student is taking an exam in to set a “baseline” for the proctoring software — be implemented for Respondus e-proctored exams.

The proposal is intended to reduce student anxiety about false accusations of academic misconduct by providing video evidence that no cheating has taken place.

Smith remarked that this year there has seen an influx of accusations of academic misconduct.

According to Smith, ordinarily students tend to admit to the misconduct they were accused of, but this year, students are maintaining their innocence — many feel the process of appeals is too inaccessible and that they are already “presumed guilty” before an appeal.

Thirdly, the caucus is advocating for professors to allow more time for students to submit assignments online, or to offer alternative methods of assessment, as students have complained about difficulties associated with poor internet connectivity and submitting assessments.

The fourth recommendation is to have professors review their course outlines and ensure that academic workloads are not above their pre-pandemic expectations.

The final recommendation is to prohibit features on online exams that prevent students from going back and forth between questions.

According to Smith, the proposals have not only been developed in the caucus, but have also worked with the assistance of two professors in the faculty of education and have their full support.

The recently launched Manitoba Alliance of Post-Secondary Students (MAPSS) finished up its first lobby week for provincial policy and budget recommendations. The group attended meetings with the Manitoba Liberal caucus and the Manitoba NDP caucus, along with the Minister of Economic Development and Training Ralph Eichler, among others.

MAPSS is also planning to launch an advocacy campaign around the new provincial bill 33 — the advanced education administration amendment act — after an upcoming meeting with Eichler set for January or February.

UMSU is also making progress on recommendations to make the Active Living Centre more accessible for transgender and non-binary students.

A proposal which includes measures such as adding menstrual hygiene product dispensers to the men’s facilities and the addition of clothing hooks to shower spaces has been received by Douglas Brown, dean of kinesiology and recreation management.

A meeting will be set to further discuss the implementation of these measures.

“I just want to publicly thank students who worked with me on [this] for their time and their leadership […] this could not have been done without them,” said Smith.

U of M confirms five open investigations of faculty underway