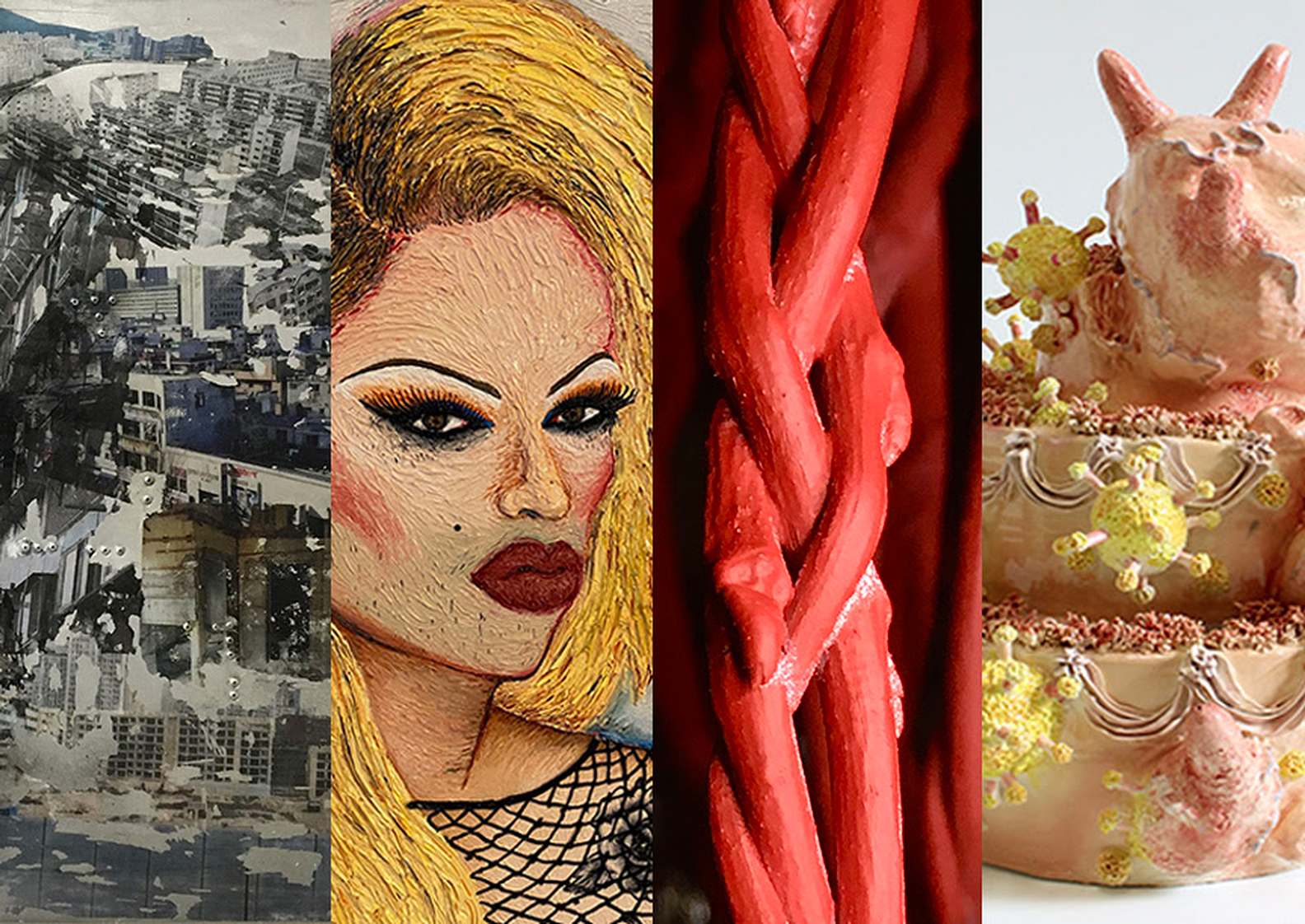 Presented by the PLATFORM Centre for Photographic and Digital Arts, 시험/ تست / yeèhdzà / test is an exhibition that showcases four school of art graduate students from the U of M — Casey Koyczan, Mahsa Merci, Hye Yeon Shin and Julianna Zwierciadlowska-Rhymer — and presents some of the work they’ve been creating over the last year.

Artist Julianna Zwierciadlowska-Rhymer said, “all four of us are working on different themes within our work, but they are all important themes within our contemporary world and issues we all need to address such as the food system, gentrification, LGBTQ [issues] and Indigenous issues.”

On the unique title of their exhibition, which references the word ‘test’ in each of the artists’ languages, Koyczan said, “I had suggested that title due to the invitation to try out presenting artworks in an experimental way, to basically test out variations of our practice.”

Zwierciadlowska-Rhymer added that this title “shows the diversity among us and the different ideas we bring forward.”

From Yellowknife, N.W.T., Casey Koyczan is a Tlicho Dene artist who works in a variety of mediums. Largely influenced by culture, experimentation and Indigenous futurisms, Koyczan has lived across Western Canada and uses an interdisciplinary approach to bring his ideas to life.

In regard to where he finds inspiration, Koyczan said he is inspired by anything and everything around him. This is reflective of the ideas that inform his work. Using installations that often take on site-specific roles, virtual reality art, experimental audio and video works and compositions of original music, Koyczan aims to present interactive works that engage in his audience’s bodily senses.

Mahsa Merci, born in Tehran, Iran, uses many mediums in her work as well and believes that “each medium has its own potential to convey the idea in a better way.” Through experimentation, Merci discovers new techniques to bring her projects together and, so far, portraits, collage and the use of hair have been prevalent in her work.

“As a queer artist, the subject of gender, identity and beauty are at the core of my practice,” said Merci. “I am working on these issues to redefine the meaning of beauty and challenge the meaning of gender and identity in our era.”

In Merci’s practice, there is no specific process involved in creating her works — she expresses her ideas in relation to the material she’s using and refines them as she continually learns more about herself.

“I believe this curiosity and the desire of production have been with me since I was a child, and it is still inside me like a great and warm flame,” said Merci. “This flame leads me to produce art every day, create my own planet and engage the audience with my subject matter.”

Another graduate student featured in 시험 / تست / yeèhdzà / test is Hye Yeon Shin, a South Korean artist who creates assemblage works with found objects that have been discarded by others.

“When I was [an] undergraduate [student], I didn’t have any money, so I had to take this method [of using found objects], but it became my philosophy,” said Shin. “Making art with materials discarded by others is a very exciting and thrilling process.”

Shin grew up with a love of observation and began practicing Korean traditional calligraphy in elementary school, which fostered her love of drawing and, eventually, inspired her to pursue a career in art.

In her work, Shin investigates “the tremendous trauma and negative emotions of humans that come with real estate and housing problems caused by over-developed cities.”

Shin began creating work about this topic when she still lived in Korea but, upon moving to Canada, realized that this was a global issue when she noticed the same circumstances and patterns occurring in Winnipeg.

Last but not least, Julianna Zwierciadlowska-Rhymer is a ceramicist from southern Manitoba who uses techniques such as wheel-throwing, hand-building, press moulds and slip-casting in her practice.

“My current body of work investigates our relationship to food and, more specifically, our disassociation from the production of animal products and our disconnection from animals as food,” Zwierciadlowska-Rhymer said. “The disconnect between ourselves and our food system is what drives me to want to create artworks exploring ideas of fragility, extravagance, ignorant blindness and unconscious consumption.”

Much of Zwierciadlowska-Rhymer’s artistic process revolves around allowing mistakes to occur in the studio. “I learn a lot from the things that go wrong and, in ceramics, everything can go wrong at any time,” she said. “Usually, my ideas come from the sculpture I built previously, thinking about what I could do differently, how to improve the form, texture, details or the glaze.”

Zwierciadlowska-Rhymer finds inspiration in the world around her, social norms, politics and how difficult and controversial narratives are discussed from various points of view.

“I think it’s important for us to try and understand one another and I believe art can be the way to open up the conversation without being accusatory,” she said. “I don’t have answers for the problems I discuss in my work, but I am here to present these problems and hope this can lead to further discussions.”

The COVID-19 pandemic has impacted these students heavily. With restrictions placed on facility access at the university, working from home studios and transporting their art has proven difficult. It has also impacted their opportunities to display work, as many exhibitions have been cancelled in light of the pandemic — not to mention the fact that they currently have an exhibition up that no one can actually visit in person due to the shutdown of Winnipeg’s non-essential businesses.

Luckily, for those of us stuck at home, 시험 / تست / yeèhdzà / test is currently available for viewing as a virtual exhibition on Tumblr that will be up until Dec. 11. An online panel discussion featuring all four artists will take place via Zoom on Dec. 4 at 7 p.m.

시험 / تست / yeèhdzà / test will be available to view online until Dec. 11. For more information, to view the exhibition and to register for the Dec. 4 panel discussion, visit platformgallery.org.