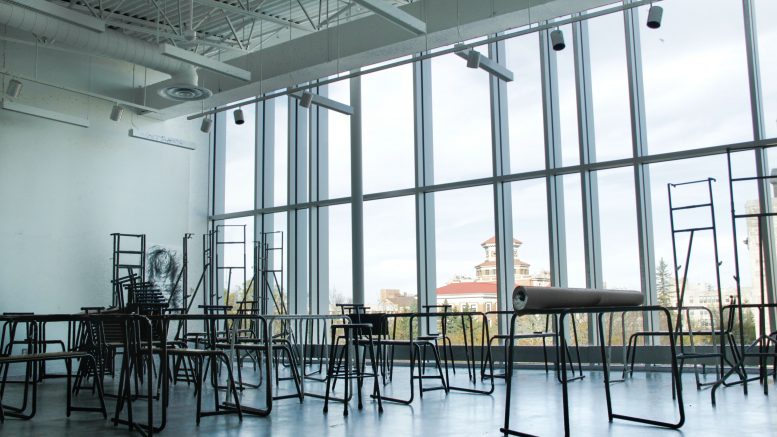 Large windows inside the ARTlab. Photo by Star Roxas

The University of Manitoba’s cutting-edge ARTlab facility is once again in the spotlight, collecting a 2016 Governor General’s medal in architecture.

Announced in May, the award is the third recognition the building has been decorated with, following the premier’s award for design in 2015 and the Prairie Design award for excellence in 2014. It is believed to be the first U of M building to receive the distinction of winning the Governor General’s medal.

Patkau Architects and LM Architectural Group designed the 6,300 square metre structure, which serves as a hub for the school of art. Construction ran from 2009 to 2012 at a cost of $24 million.

“There is a dynamic tension in the plan, creating simple yet idiosyncratic spaces inside and out,” reads a jury comment attached to the award.

Greg Boothroyd, a design architect and principal at Patkau Architects who was directly involved with the project, said the building gives the art school an authoritative presence on the Fort Garry campus.

“In the past, the school of art has been scattered all over the campus, so they did not have any strong presence on the University of Manitoba campus,” he said.

Boothroyd, who is currently involved in the ongoing renovations to the adjacent Tache Hall music, art, and theatre complex, said the firm is proud of the recognition.

“It is an honour to get this award as it is the most prestigious architecture award in Canada,” he said. “As a company, it is great to be awarded for all the hard work you put into a project.”

The ARTlab building is a blend of artistic features that symbolize the beauty of the arts – from the winding staircases and panoramic view of painting studios, to the terraced seating and V-shaped sculpted columns.

The ultra-modern facility is well-furnished and equipped with resources that afford students the capacity to engage with the diverse dimensions of digital technologies. The ARTlab building showcases its uniqueness through its rare mix of drawing, painting, video, and print media studios.

Amy Zinn, a first-year student in the school of art who studies in the facility, said it is the kind of building that shows students what can be achieved through art.

“It is surreal, inspiring,” she said.

“It probably makes you think of a bigger picture when there is a faculty like this – that you can be successful in arts.”

U of M collecting memories of life in Tache Hall