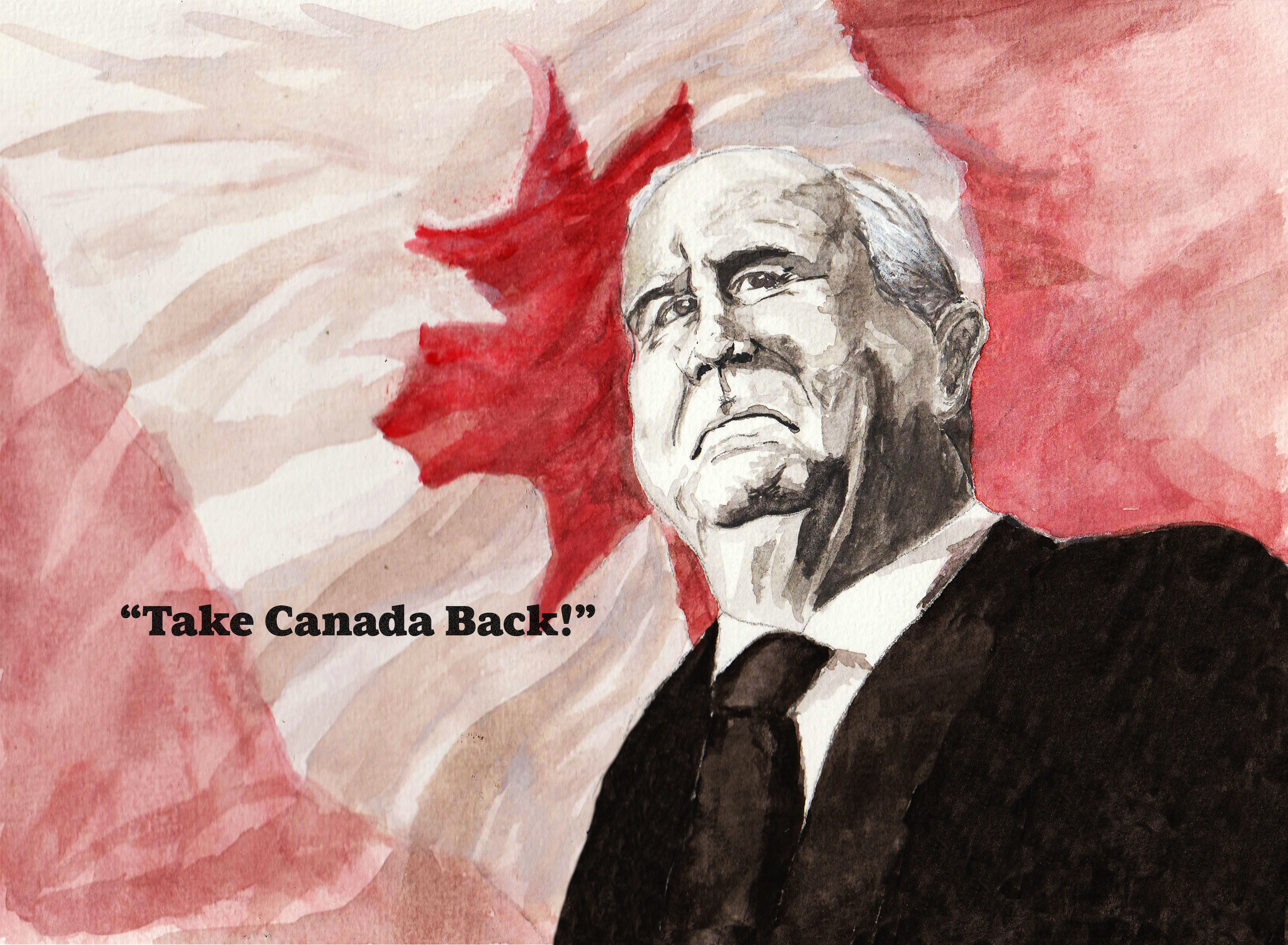 With Erin O’Toole’s recent victory in the Conservative Party of Canada leadership race, the party has since adopted “Take Back Canada” as its new unofficial slogan. O’Toole presents himself as a progressive conservative who supports the right to abortion and LGBTTQ* rights, but his slogan romanticizes the past and has the potential to stoke fear and division.

After the Andrew Scheer-led Conservatives lost to the Liberals in last year’s federal election, it was assumed that the party would choose a centrist leader to take Trudeau on. Erin O’Toole seems to fit that bill on paper — he has been criticized for being too moderate by some conservatives and two of his leadership opponents, Derek Sloan and Leslyn Lewis, presented themselves as much further to the right than him.

However, O’Toole has stated clearly that he will not bring the party to the centre of the political spectrum. O’Toole called himself a “true-blue” candidate in the leadership race and his “Take Back Canada” slogan seems to confirm this.

The question on Canadian voters’ minds — who exactly are we taking Canada back from? And where would that leave Canada afterward?

Does he mean the Indigenous people who have lived on the land, now called Canada, for thousands of years before settler colonialism and have fought for treaty rights?

Or what about immigrants from around the world that call Canada home? Or the women, LGBTTQ* people and people of colour who have all fought for their rights in recent decades?

O’Toole would likely reject those interpretations of his slogan, but the primary problem with it is that it’s extremely vague and can be interpreted in potentially harmful ways.

For example, white nationalists and supremacists could take the slogan as a confirmation of their hateful beliefs.

It is important for clarification to define these two similar, yet distinct beliefs.

White supremacy is the misguided belief that white people are genetically superior to other races. Supremacists suggest they should be given control over the Black, Indigenous and people of colour (BIPOC) community. On the other hand, white nationalists believe that white people should organize the principles and the culture within a nation and enforce segregation. In other words, white nationalists often espouse white supremacist beliefs and vice versa.

A 2015 study found that at least 100 white supremacist groups were active across the country. These groups are highly organized, heavily armed and pose a legitimate threat to the country, especially to the BIPOC community.

To be clear, O’Toole has condemned white supremacy, but it doesn’t matter whether the candidate or the party disavows it. The language of the slogan alone can have an impact on people’s actions.

Unfortunately, this type of divisive language can help win elections.

Anger divides the country by party affiliation. This can be seen in the United States, with its sharp political divisions among the electorate.

Anger has the potential to erode common ground and dehumanize people who think differently than yourself. It hampers democracy as people begin to see those who disagree with them as enemies.

The Conservative party has also already had squabbles with far-right fringe groups within its ranks.

Maxime Bernier, a former Conservative MP and failed 2017 Conservative leadership candidate, broke away from the party and founded the People’s Party of Canada. Bernier has said on the record that Prime Minister Justin Trudeau believes in “extreme multiculturalism” and he has also called for a significant reduction in immigration levels.

Even though Bernier is no longer a member of the party, his second-place finish in the 2017 leadership race shows that divisive far-right politics can be relatively successful within the Conservative party.

O’Toole is certainly no Bernier — he is far more receptive to immigration and diversity, but his brand of populism has the potential to stoke the flames of white nationalism and supremacism.

O’Toole has also, thus far, backed away from some of his more progressive beliefs. He has publicly stated that gay conversion therapy is wrong and should be banned, yet at the same time asked social conservatives during the leadership race to make him their number two choice.

O’Toole has even recently rewarded social conservatives by allowing them to vote freely on a potential bill banning conversion therapy.

This raises questions of whether O’Toole will actually be more socially progressive and open than his predecessors or if he’ll continue to give in to the more radical sects of his party.

Beyond the increased division, the slogan “Take Back Canada” distracts from the real issues that this country faces.

Canada is in the midst of a second wave of COVID-19 outbreaks after a mostly well-managed summer. Canada is also dealing with a recession that has shut down thousands of businesses, resulting in an unemployment rate that is hovering around 10 per cent.

The potential issues that come with the slogan seems to be related to O’Toole’s vow earlier this year to protect Canada from “cancel culture” and the “radical left” in his pitch for leadership.

This divisive language will only worsen the political climate at a time when the country must find a degree of unity.

“Take Back Canada” means potentially losing various rights and freedoms that many marginalized groups have fought for. O’Toole, for the betterment of the country, must seek to unify it — that starts with changing his slogan.

No pucks given: the real victims of the NHL lockout

A conversation with the minister for the status of women