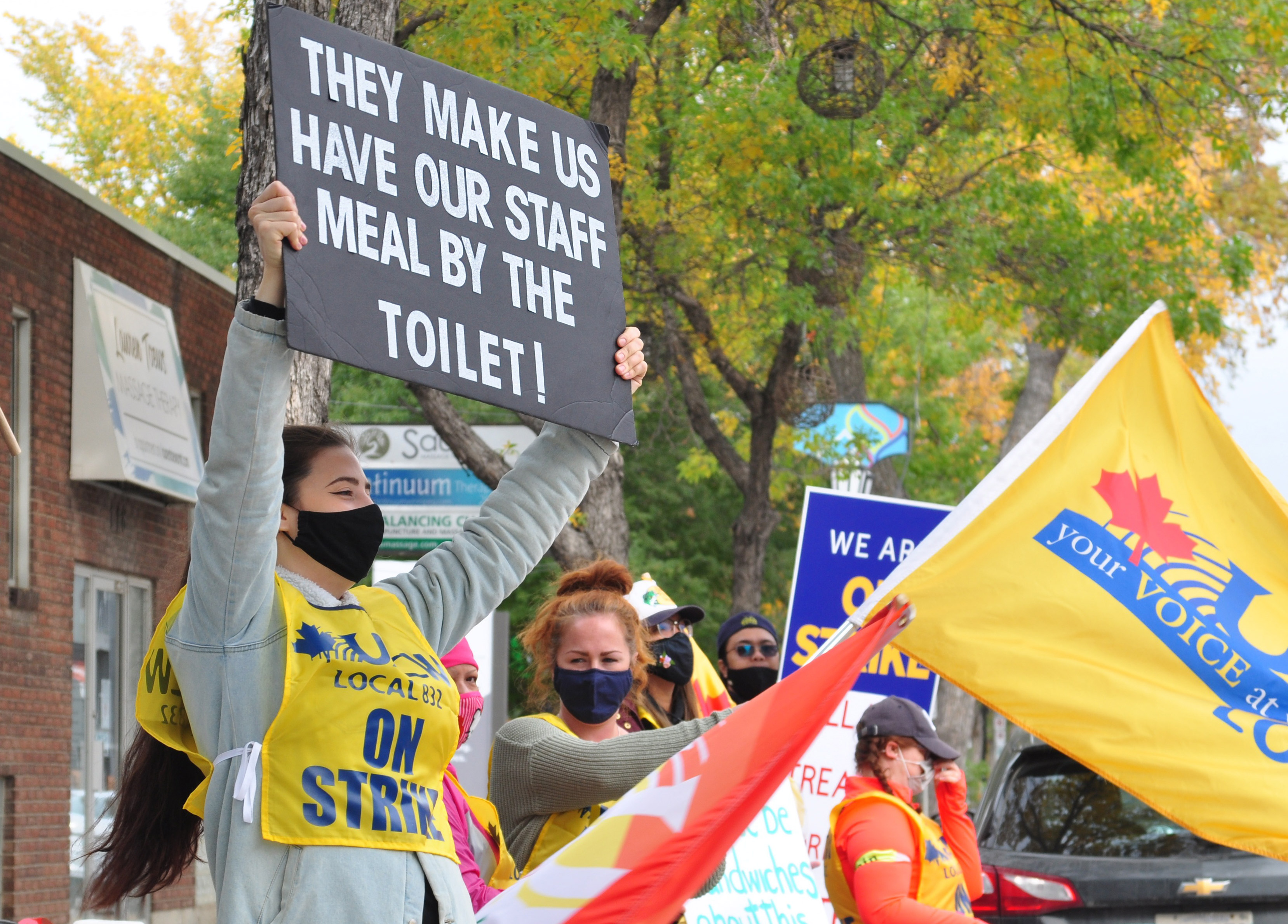 In recent years, Stella’s has been no stranger to controversy, but this Monday, the company closed down its Sherbrook Street location’s dining room after employees went on strike to fight for improved working conditions.

This decision was made after the restaurant group and the union met with a conciliator to renegotiate a contract following the Sept. 20 expiration of the contract imposed by the Manitoba Labour Board, leaving the workers with no condition agreements, said United Food and Commercial Workers International Union (UFCW) local 832 president Jeff Traeger.

The workers started a strike after the union had been negotiating with the company for months, and was “unable to get them to move on any of the issues that were important to our members,” he said.

Stella’s asserted that the union’s demands would have been “completely untenable, especially during a pandemic, with countless restaurants struggling,” in a press release Sept. 24 claiming to clarify “misinformation shared about the current labour dispute this week.”

Though the dining room is closed, the location remains open for DoorDash orders and customer pick-up. The 38 workers at the location organized with UFCW local 832 following the Not My Stella’s campaign in 2018, when former and current employees came forward with allegations of abuse and harassment at work.

After Stella’s announced the closing, Traeger wrote in a Facebook post that UFCW is disappointed that the restaurant decided to close the dining room, but “it’s not surprising considering the anti-union positions they’ve taken since day one.”

He said that during the conciliation that day, instead of discussing any positions, “they only offered concessions that would make life worse for workers.”

The union is discussing possible next steps with their members, but Traeger made clear that the restaurant’s decision to close does not end the workers’ right to strike.

The union said that wages, though one of the demands, were not the main issue of the strike. The key demands had to do with scheduling issues.

Traeger said the strike could have continued on for up to three months, until Stella’s was willing to negotiate a deal.

On Sept. 24, Stella’s maintained their position and added that they have offered to extend the contract imposed by the Manitoba Labour Board for another year and “did not ask for any concessions during this difficult time.”

“Many of the issues that UFCW is proposing at the bargaining table are in relation to scheduling, and to remove the employer’s ability to use the schedule as a weapon against the workers,” the union said in a statement released online in response to Stella’s Sept. 24 statement.

It continued, saying that employees submit their availability, “then the employer is intentionally scheduling workers outside of tha t availability.”

Part-time workers are required to be available all day for four days in total, two days during the week and both days on weekends. One of the union’s demands was to allow that members no longer have to work weekends after one year of service.

The availability requirements meant workers would be “leaving classes early to come to work, and people [are] not being able to pick their kids up from school,” said former employee Alex Dupuis.

Traeger reported that there were about 11 university students that had to quit their job at Stella’s at the beginning of September. He said students had to “literally choose between work and school, and we don’t think that’s right.”

Dupuis said a shift as a server that exceeds five hours entitles a worker to — and does not allow them to opt out of — a 30-minute unpaid break and a 15-minute paid break. He explained that if a break was scheduled in the middle of a shift, servers were required to hand over their tables that haven’t paid to another server, which meant that a server “basically [makes] none of the money that [they] earned with those tables.”

Michelle Dallmann, another server who worked at the restaurant, said this policy was “heavily enforced,” and if not done, workers would be punished for it.

Dallmann said that, to her, “it just goes to show how much actual value the employees have in terms of their hard-earned money.”

The union aims to restrict this practice from occurring. In the statement, it said that before unionization, table transfers weren’t a common requirement.

Stella’s former and current employees said the company would often fire management and staff. This was done “to basically bring in more people who were complacent and wouldn’t raise a fuss,” said former Stella’s Sherbrook employee Connor Wielgosz.

“Stella’s has a history of doing that,” Wielgosz said.

“They kind of get rid of any of the people who would just ask for common decency, who ask not to be abused in the workplace, whether verbally or, as you saw through Not My Stella’s, physically or sexually.”

Dallmann agreed, saying “it’s just an abuse of [employee] morale, and they’re very ready to do it.”

She said that “one of the ways that [Stella’s] itself kind of keeps that morale and rapport down is by taking managers who have built that respect and move them other places so as to bring in other people who are a lot more detrimental to the best experience of the workers who are here.”

According to Dallmann, since the union was formed, Stella’s cut hours from employees’ shifts.

The UFCW has also demanded that a 30-hour minimum be granted to the eight senior employees out of the 38 union members.

The final demand the union asks of Stella’s is a wage increase of 25 cents applied to all workers’ current pay, which is currently between $11.65 and $13.25 per hour.

Traeger said Stella’s demands “that you’re available [for] four shifts a week and those shifts might be five hours long, so [workers are] only getting 20 hours [per week], but you have to be available all the time.”

Because of strict availability requirements, workers are unable to pick up another job to make up for the wages.

According to Traeger, in addition to the pay putting employees below the poverty line, the employees also did not get full-time hours. Only a few got any benefits and no employees got a pension plan.

“We’re trying to bring the restaurant and hospitality industry into the reality of the new world, and we’re trying to say [that] people who are willing to work and who are going to work should be treated with respect and dignity, they should be able to earn a living wage, they shouldn’t have to be the working poor.”

Traeger said he thinks the pandemic has taught the public that “people work in service industries, people who work in retail, are a lot more important than we thought they were before [COVID-19], and I think it’s time that employers step up and recognize that.”