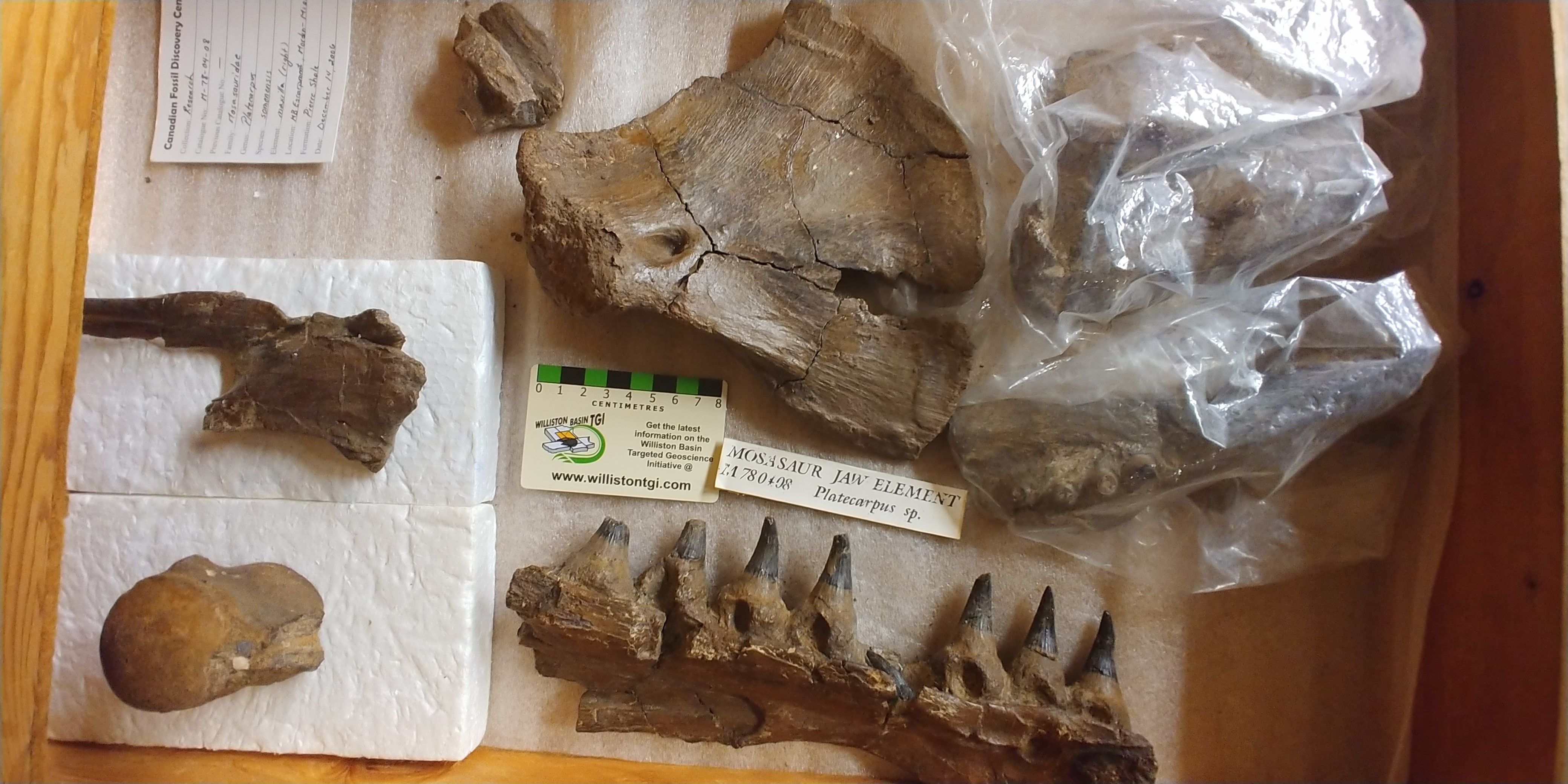 Brink’s role involves advising the CFDC on initiatives involving its fossil collection and field sites, as well as providing a conduit between the resources at the centre and the university.

“The main goal of my adjunct curator position will be to highlight the existing collection of the CFDC in terms of research potential and to grow the collection through fieldwork,” Brink said.

“There will be plenty of opportunities for students to work on honours theses, M.Sc. and PhD projects focused on the fossils of Manitoba.”

Brink is the first academic vertebrate paleontologist with the CFDC since the 1980s, when Elizabeth Nicholls helped expand the centre’s collection of marine fossils.

One specimen of a plesiosaur, discovered in 2004 and extracted in 2005, is nicknamed “Betsy” in Nicholls’s honour.

“A lot of the plesiosaur’s bones are still covered in sediment from the field, so work needs to be done before research can be completed,” Brink said.

“CFDC staff and researchers have shown that the specimen has associated gut contents, so we can tell what the plesiosaur’s last meal was before dying.

“These interactions are hard to find in the fossil record.”

Teeth play a large role in Brink’s research. Her work focuses on the evolution and development of teeth and bones, as well as how those changes interact with the animal’s environment.

“Right now, I am very interested in the teeth of Cretaceous-aged animals found in Manitoba,” Brink said.

Betsy the plesiosaur is particularly interesting for Brink because the specimen has a full set of teeth.

“Teeth are very useful because they give us an idea of what an animal ate and their role in ancient ecosystems […] I will be working on projects with undergraduate and graduate students looking at the microstructure and the chemical composition of these teeth to understand in great detail how they are formed and what information they can give us about tooth function.

Most vertebrate animal fossils in Manitoba are marine fossils. The deposits around the CFDC date from the late Cretaceous period, roughly 80 million years ago, when the Western Interior Seaway split North America in half. Brink calls the province’s fossils “relatively underexplored” in comparison to other Prairie provinces, since Alberta and Saskatchewan are internationally known for their animal fossils, particularly dinosaurs.

Brink’s research on teeth at the U of M will help her and other paleontologists understand aspects of life in the prehistoric Western Interior Seaway. The process involves cutting fossils into tiny pieces and examining them using technology like powerful microscopes and computed tomography (CT) scans.

“The nanostructure of bones and teeth can be used to determine how extinct animals grew and under what conditions, which in turn gives us clues to how these animals interacted with their environment and what the planet was like when they were alive,” Brink said.

The CFDC runs over 30 active dig sites in southern Manitoba, where the general public can join researchers and staff in excavating fossils. The 2020 dig site tours have been cancelled due to the ongoing COVID-19 pandemic, but the CFDC galleries are open to visitors and Brink remains optimistic.

“This will give us a chance to prepare for next season by searching for new, significant quarries that could be opened for public participation next year,” she said.

Multiple sclerosis research at the U of M