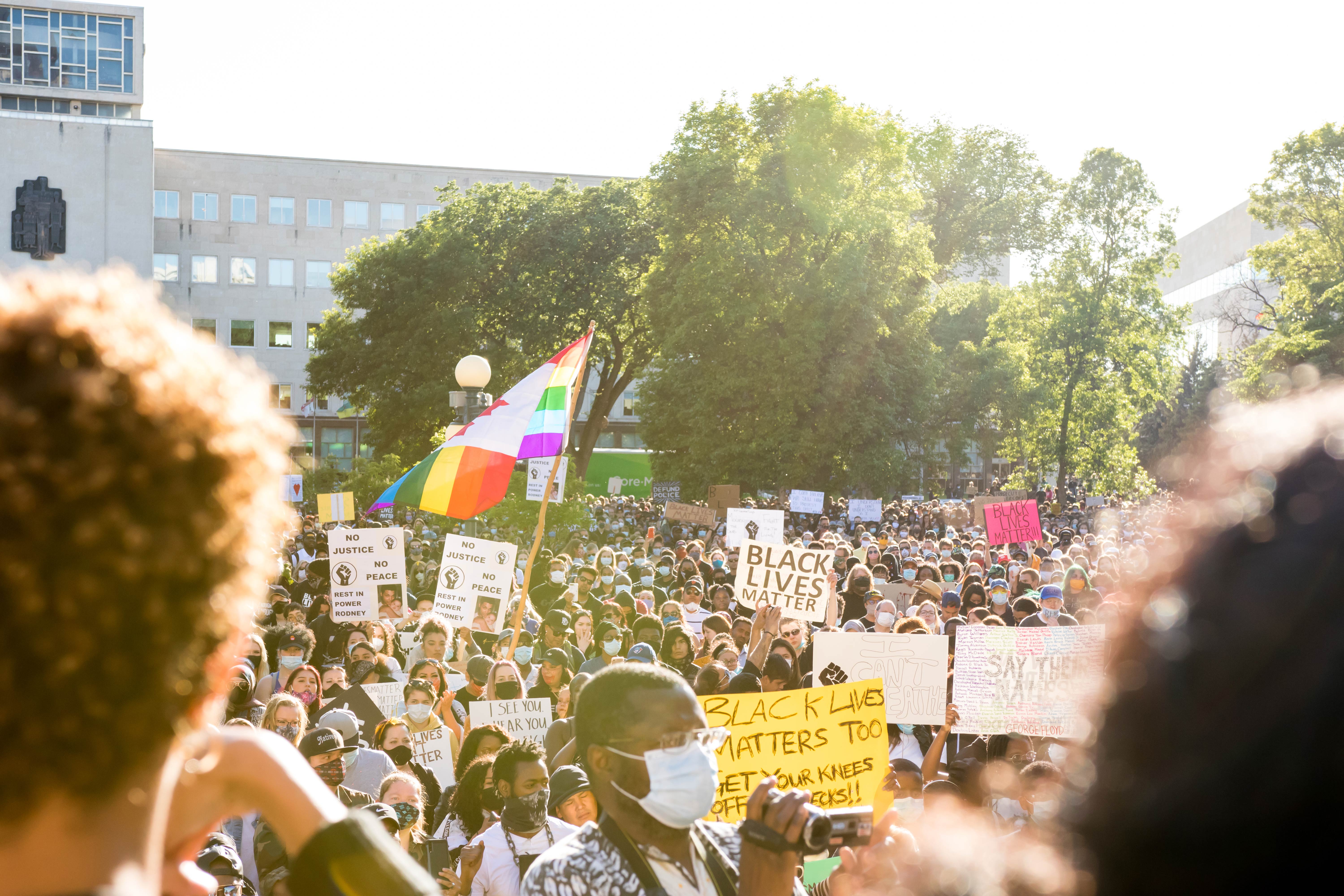 On June 5, the Justice 4 Black Lives Winnipeg rally took place at the legislature to protest the deaths of Black people at the hands of police, drawing thousands.

Police estimated more than 15,000 people came out in support of Black lives at the rally.

The exceptionally large turnout was the result of global outrage over the deaths of Black people following police brutality in the U.S. and Canada.

This protest was one of many taking place all over the world sparked by the death of George Floyd in police custody — a Black man — by police officer Derek Chauvin in Minneapolis, Minn. May 25. Chauvin was arrested May 29 and has been charged with second-degree murder.

In Winnipeg, Machuar Madut was shot by police Feb. 23, 2019. He was pronounced dead upon arriving at the hospital. He was Black. No officers were charged after an investigation into the deadly use of force by police by the Independent Investigation Unit of Manitoba. An inquest into his death is pending. There was a moment of silence to remember Madut at the rally.

Protesters held up signs containing messages of solidarity and rallying cries, including “Being Black is not a crime,” “I can’t breathe,” “We must dismantle white supremacy,” “No justice no peace,” “#GeorgeFloyd can’t breathe,” “Black lives matter,” “Silence is violence” and “Stop killing us.”

The organizers of the rally spoke to attendees, and other speakers included Uzoma Asagwara, New Democratic Party MLA for Union Station; Natalie Bell, a local Black influencer and founder of PegCityLovely; Sandy Deng, a Sudanese community activist; Felisha Simone, an Afro-Indigenous activist; Adeline Bird, an Afro-Indigenous advocate, author and filmmaker; Mandela Kuet, a community organizer; Michelle Edwards, a teacher and advocate for the Black and lesbian communities; Kayla Fernandes, a queer poet and activist; and Nadine Sookermany from the Women’s Health Clinic.

Protesters marched from the legislature to the Forks and brought traffic to a halt along parts of Broadway in downtown Winnipeg.

A fourth-year international environmental science student at the U of M who wished to remain anonymous said she showed up to the rally because “it is time for systematic change.

“For far too long, Black people globally [have been] oppressed.”

“I think it’s time that we actually hold the system accountable,” she said. “We have been doing this for years, but no one has really paid attention but I’m glad that now people are paying attention.”

She said she believes the police receive too much funding and are calling for the city to defund the police.

“I know there’s multiple instances where a small thing happens and eight cop cars show up with 16 police. They clearly have too much money and too much time on their hands.

“As an international student in my faculty, I feel like we are out here representing our brothers and sisters.”

She emphasized that police violence occurs close to home and hurts marginalized communities.

“Violence is not unique to [the U.S.], there is violence toward Black people here in Canada,” she said. “Canada has done a really good job of covering it up with public relations and it’s not right. There’s also violence [against] Indigenous peoples.”

Syanne Tippmann and Maria Tippmann attended the protest to support those who have been affected by racism in policing.

“I’m just here to support all the people that died from racist cops and just to support Black people,” Maria Tippmann said.

They believe the rally will be effective in giving “a huge wake-up call” to Winnipeg.

A student in attendance speaking on condition of anonymity  said they attended because they were “tired of seeing Black people, innocent Black people, killed by the police.”

“I find it hard to just sit around and not do anything while innocent people are being killed.”

They said they think the rally will send a strong message to the city that the people of Winnipeg care about the issue of racism in police departments and that they believe the demands issued by Justice 4 Black Lives Winnipeg will lead to broader change and “make a difference.”

Justice 4 Black Lives has issued a petition with a list of demands to make Winnipeg safe for all BIPOC (Black, Indigenous, people of colour).

The petition has garnered more than 60,950 signatures to date and lists the City of Winnipeg, Mayor Brian Bowman, Premier Brian Pallister, the Manitoba Teacher’s Society and the province of Manitoba as decision makers.

The 11 demands of the petition include defunding and abolishment of the Winnipeg Police Service and asking the province to “cut all current ties that the Manitoban education system has with the police.”

Message of hope for LGBT youth

Scotties to take over Stonewall