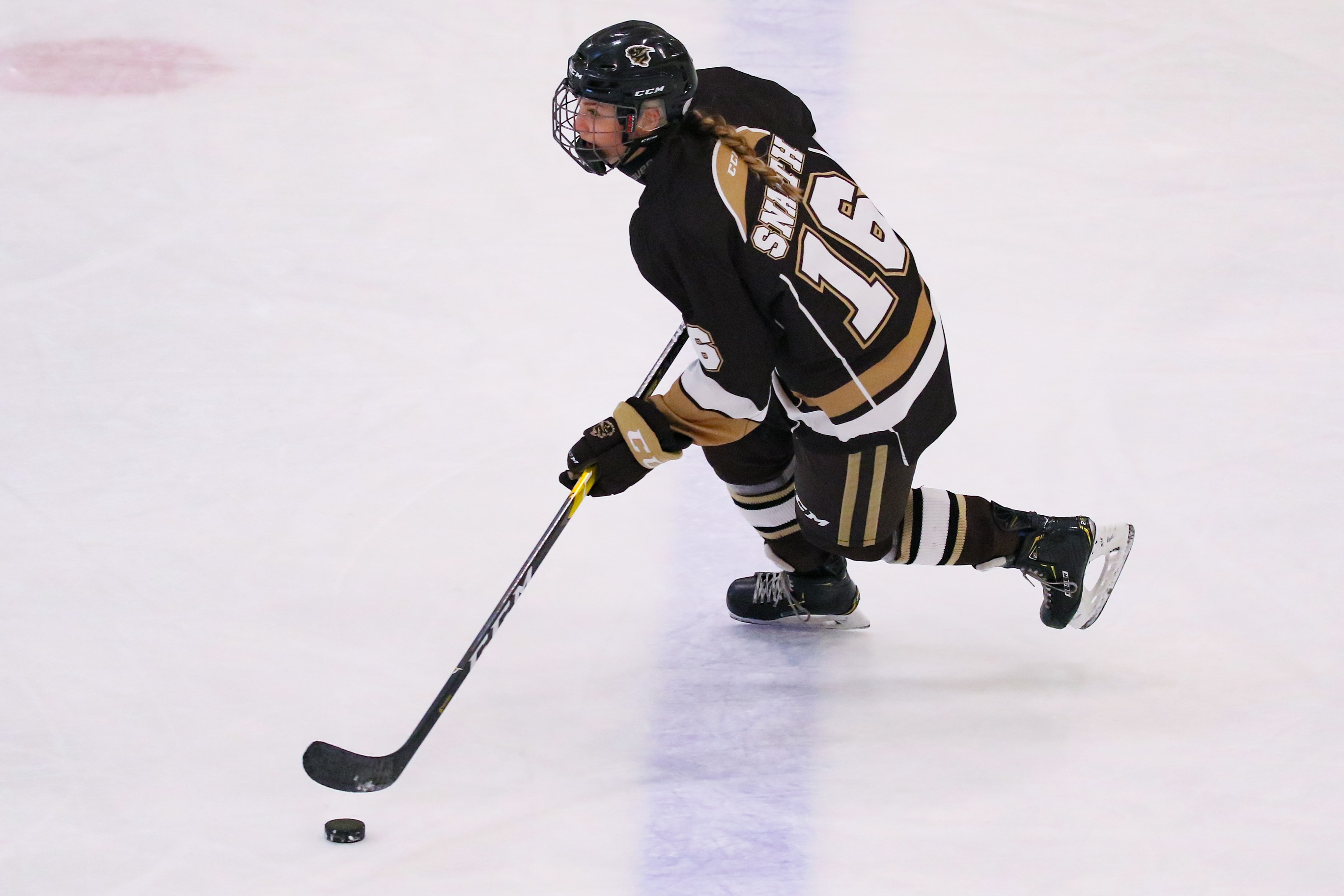 Chloe Snaith scored once against the University of Saskatchewan Huskies, ending the herd's goalless drought at five games

It is amazing how a single goal can erase weeks of frustration.

Such was the case on the weekend, as after its fifth straight goalless loss Friday, the U of M Bisons women’s hockey team found the back of the net Saturday to halt the losing skid at six.

Bisons head coach Jon Rempel noted the split series is a promising result for a young squad trying to re-establish itself in Canada West.

“We’re not going to score much, that’s just not how this team is built this year,” he said after Saturday’s win.

“You know, when you have six true freshmen playing up front, and you’ve got another two kids who haven’t played much in their first two years […] we’re not going to be able to generate a ton of offence that way.”

Rempel added that the team’s defensive play “was encouraging, I thought we were just way more engaged today than we were last night.”

What should have been a passionate and close game against a bitter rival was a quiet affair Friday, as the herd mustered only 14 shots in a 1-0 loss to the University of Saskatchewan Huskies.

In contrast, Erin Fargey had a less than quiet night in the Bisons crease, facing a consistent — albeit low-quality — barrage of 30 shots by Saskatchewan.

A bright offensive spot for the Bisons was the St. Mary’s line of Kaitlyn Chatyrbok, Sarah Dennehy and Kate Gregoire. The trio — all former linemates at St. Mary’s Academy — came into the season with built-in chemistry, but so far have been unable to find the back of the net.

Despite early pressure from Saskatchewan, the St. Mary’s line had the best chance of a scoreless first period.

On a late powerplay, with Dennehy and Chatyrbok causing havoc in front of the Huskies goal, Gregoire thread the needle to Lauren Warkentin in the right faceoff circle. The veteran defender ripped a shot on goal but was stopped by Jessica Vance.

The puck popped out from Vance’s arm and right to Gregoire, who fanned on the tap-in while staring at a yawning cage. Saskatchewan was able to clear the puck away and avoid further trouble.

The trouble returned in the second, but this time at the other end of the ice.

A Bailee Bourassa shot from the slot bounced out of Erin Fargey’s glove and fell behind the second year netminder. The puck landed in the blue paint where Leah Bohlken slammed it home for the 1-0 Huskies lead in the second.

The Bisons had a few solid chances in the final frame to tie the game, with none better than Dennehy in the final minute.

She picked up the puck in the faceoff circle, catching Vance on the wrong side of her goal. The rookie picked her spot, shot, but Vance dove across to make the save, securing the win for her side.

Some of the chippiness from Manitoba-Saskatchewan series of old returned Saturday, but the whistles were out to spoil the fun. A grand total of 20 penalty minutes were handed out between the Huskies and Bisons in a 2-1 win for the herd.

After five games without a goal, Manitoba finally found the back of the net in the second period to open the scoring.

Emilie Massé got the puck to Chatyrbok, and she sent it Chloe Snaith at the point. She walked up, sent a low shot in on Camryn Drever, sneaking the puck past the netminder’s left skate.

A cathartic clunk caused the crowd to erupt as the Bisons gained a 1-0 lead.

“Like you would expect — relief, more than anything else, for everybody,” Rempel said post-game.

“Probably just allowed us to finally just play a little bit, not worry about what the score was, […] but anyways, that’s the game of hockey.”

Manitoba was not done there — Chatyrbok gave her side a 2-0 lead a few minutes later on the powerplay.

Chatyrbok picked up the puck in the corner, circled around and threw a pass toward the slot. Her pass deflected off a Huskies defender and past Drever for her first goal of the season.

“We’ve been working so hard and we’ve had so many chances that when it breaks, it breaks — and today it happened for us.”

Shyan Elias scored for the Huskies in the third and although Saskatchewan had a few high-quality scoring chances, Amanda Schubert shut the door for the herd. Manitoba picked up the 2-1 win to snap the losing streak at six games.

Despite the lengthy skid, the rookie-laden Bisons squad seems constantly on the cusp of figuring it out. Players looked more confident on the weekend, and the flow has begun to return in spurts as the wrinkles get ironed out and chemistry is built.

For now the herd sits last in the conference with 10 points on the season.

Manitoba will head to Edmonton, Alta., next week for a pair of dates against the University of Alberta Pandas. Game one is Nov. 22 at 8 p.m. CST and game two is Nov. 23 at 3 p.m. CST.