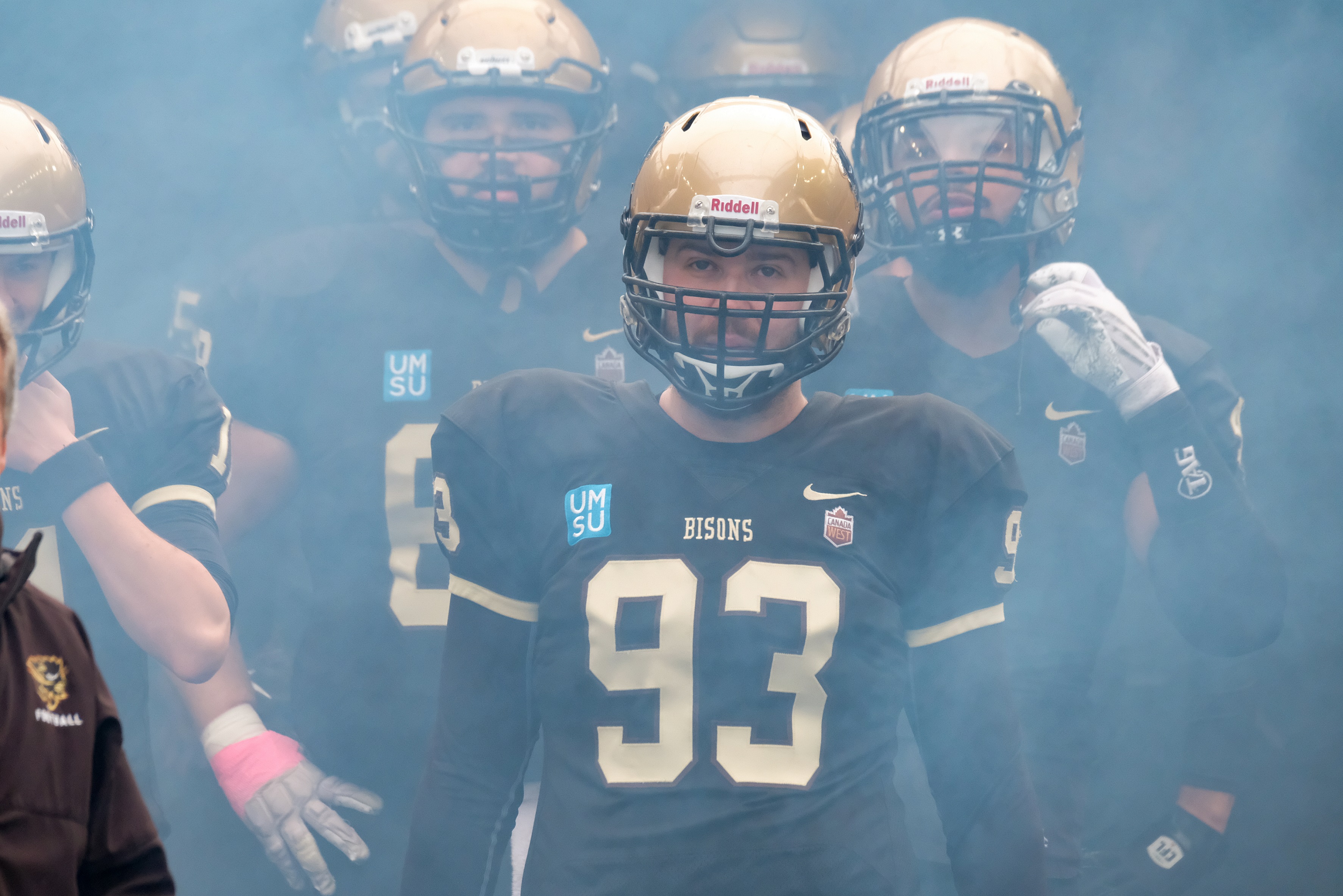 Jared Lazarenko takes to the field for the U of M Bisons football team during an Oct. 19 game

With a playoff matchup looming, the U of M Bisons football team defended its home turf for the final time in the 2019 season with a huge 43-29 win over the University of Calgary Dinos.

Calgary did not look its usual gold-standard self in the opening half, as the Bisons controlled play and ran up the score leaving little room for a comeback.

Quarterback Des Catellier got the ball rolling — or more accurately, running — in the first quarter. The Alberta native got the herd to the red zone and converted on a five-yard run for the touchdown and 7-0 Manitoba lead.

Matt Riley knocked down a pair of field goals, from 47 and 46 yards respectively, before Niko DiFonte picked up a rouge to get the Dinos on the board. Entering the second quarter, the herd had built a respectable 13-1 lead.

Manitoba built on its lead early in the second quarter with another conversion in the red zone. This time Catellier went with the pass, finding Abdul-Karim Gassama with a seven-yard dart for the touchdown and 20-1 lead.

Riley picked up another field goal to make it 23-1 Manitoba before the Dinos put up more points. Dallas Boath snagged a five-yard pass from Adam Sinagra for the touchdown, but the two-point conversion attempt by Calgary was stopped, leaving the Dinos behind 23-7.

Riley picked up his fourth — and longest — field goal of the game less thantwo minutes later, putting a 48-yard kick through the uprights to expand the Bisons lead to 26-7.

Then it was Michael Ritchott’s turn to get on the scoresheet, as Catellier gave the running back the ball two yards out and Ritchott broke into the endzone for the touchdown. Riley knocked down the conversion and Manitoba went into halftime up 33-7.

Calgary showed its experience in the third quarter, trying to grind out the comeback. Sinagra went long with a 26-yard bomb to Nathanael Durkan for a Dinos touchdown to make it 33-15 and give his club some life.

Shae Weekes had other plans.

Sinagra got the Dinos to the Manitoba 26-yard line and set up for another pass. He let go of the pass, but Weekes was waiting at the Manitoba 21-yard line. The second-year defensive back grabbed the interception and took off down the field, carrying the ball 89 yards to the house for the touchdown.

Riley picked up the convert and Manitoba took a massive 40-15 lead.

The Bisons kicker scored his fifth and final field goal of the game early in the fourth quarter, this time from 27 yards, before Calgary went on a late charge.

Josiah Joseph darted into the Bisons end zone with just under four minutes to play, and Jalen Philpot pulled down a 20-yard Sinagra pass in the dying seconds, but it was too late as Manitoba claimed the 43-29 win.

With the win the Bisons clinched a playoff spot, setting the stage for a playoff rematch with the Dinos. In 2018 Manitoba was thumped 37-13 by Calgary in the opening round of the Hardy Cup playoffs, and will look for redemption this season.

The Bisons will finish the season on the road in Regina, Sask., to take on the University of Regina Rams Oct. 25 at 8 p.m. CDT.

Bison athletes get hair cut in support of cancer survivors