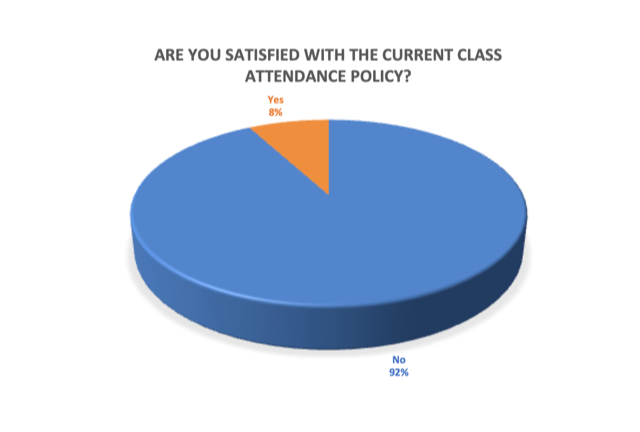 The faculty of education is the site of a struggle between students and administration over the faculty’s attendance policy, which some students are saying is too strict.

The current attendance policy within the faculty of education only allows for three class hours per term to be missed unexcused before disciplinary action — mainly potential disbarment — can be taken against a student.

Students can not miss 20 per cent — or eight to nine hours — of classes, excused or unexcused, without risking potential withdrawal from the course or program.

Should the student exceed three missed class hours, they will receive a due process letter informing them they face disbarment, and then the relevant department head will get in touch with the student to discuss potential disciplinary action.

After hearing complaints that the policy was restrictive from fellow students, education student council senior stick Elvina Mukhamedshina decided to survey education students to grasp the level of discontent among the student body and identify their specific issues with the policy.

“I began it because I have personally heard the student body, and people, and classmates and colleagues within the faculty complain about the attendance policy,” she said.

“It’s just whenever the attendance policy comes up, there’s rarely a positive feedback or a positive sentiment or experience with it.

“People, students, are not happy with it.”

The survey was sent via email to every undergraduate education student and the size and extent of the results “overwhelmed” Mukhamedshina.

Nearly 40 per cent of the student body responded to the survey, and just over 92 per cent of respondents said they were unsatisfied with the class attendance policy.

“When I sent out the survey, I had no idea — I didn’t expect that so many students would reply […] people wrote paragraphs,” she said.

On Feb. 12, Mukhamedshina — along with the rest of the education student council — shared the results of the survey with students. In attendance were more than 40 students, four administrators and three professors from the faculty.

According to the presentation, many of the survey responses were from students who said they felt the policy was structured unfairly.

The presentation included multiple anonymous testimonials, including one from a student who claimed they had “been incredibly sick, vomiting, dizzy, [et cetera] and have come to the university in fear I would be kicked out of the program.”

As a result of the survey and the presentation, administrators held a presentation of their own on the attendance policy and heard student concerns Feb. 15.

The presentation was led by associate dean Francine Morin, who was the principal author of the procedures document of the attendance policy.

Over 80 students attended the faculty’s presentation.

Before addressing the specific concerns expressed in the survey, Morin said she faced no pushback from students when the attendance policy was last reviewed in 2013.

“At that time nobody suggested any changes,” she said.

Morin also referred to the data Mukhamedshina had collected, which represented nearly 40 per cent of the student body’s opinion on the attendance policy, as “a little survey.”

The presentation from administration answered what they considered to be reoccurring concerns from students and reiterated that absences under medical or compassionate circumstance were exempt from the attendance policy.

Morin’s presentation included a slide explaining missing class due to poor weather conditions would be considered an excusable absence on compassionate grounds.

However, the slide omitted how the policy documentation recommends students who live outside the city stay with a relative or rent a hotel room in the case of bad weather.

When pressed on the feasibility of rural students actually being capable of this, Morin defended the recommendation by calling it “problem solving.”

“That comes up a lot,” she said. “We live in Winnipeg, Manitoba. We know that every year we are going to have bad weather.”

Whit Lodge-Zaparnick, the student council’s LBGTTQ* representative, responded to Morin’s point by noting not every student has the familial connections to the city or the disposable income to book a hotel room.

Morin did not address the point raised.

Morin said students should not seriously fear disbarment for attendance.

“Since I’ve been an associate dean, no undergraduate student has ever been debarred for attendance,” she said.

At the end of the administration’s presentation, Morin introduced a new working group to address the wording of the attendance policy and asked for Mukhamedshina to help find students to be a part of the working group.

“I do think that the meeting went better than I had expected,” she said.

Morin said she took personal responsibility for any misunderstandings students may have had with the attendance policy.

“So, if any of you have ever felt fearful, or afraid or intimidated in any way by the procedures document or the policy […] I will take responsibility,” she said.

“Since I am the associate dean. And I did lead the development of that document.”

Belly dancing: a good way to explore your sensual side