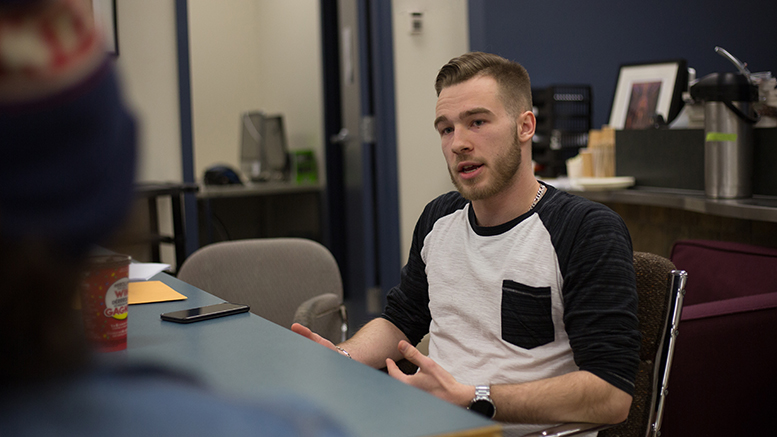 Business student and event producer Jake Letwin said his first goal if elected president will be shifting the union’s focus away from “aggressive” political theatre and toward student outreach.

“I think one thing we saw going into this was the elections in the past, everyone was, first of all, very political,” he said.

“Which we didn’t like. It’s a student union. It’s about us, the students. It shouldn’t be done that way. So we wanted to kind of take a more friendly approach to this.”

Opening the floor to evaluation from students is the key goal of the New UMSU slate and Letwin said he hopes to learn from the people who work within UMSU.

“UMSU has plenty of employees that are very experienced,” he said.

“Us, like the elected members, aren’t the only ones involved — there’s a lot of salaried employees at UMSU that are very knowledgeable and we want to work with them and what they know to come to those decisions.”

Letwin said he hopes to bring new faces to the UMSU executive, which he said he feels has elected “the same people year after year.”

“I think we bring a whole new perspective to the whole student union, student election system,” he said.

Letwin said there are no plans for New UMSU to run for a second term if elected for a first, which he said opens room to make larger changes to UMSU than past executives, which have made what he called “quite incremental” changes.

“We don’t want to spend half of our time in office working on our next election,” he said.

“We want to get in, get things done, accomplish things for the students and really make substantial changes while we’re there, as opposed to being concerned about the next [election] halfway through our term.”

One example Letwin said he hopes to make is polling students on the future of Frosh Fest, which he called “a very sensitive subject.”

“We want to look at Frosh and decide if we want to do it super big, bring it back to what it used to be and have it as a huge get-together for students, one of those things to build school spirit,” he said.

“Or if we cut it entirely and save that student money. Recently, it’s been kind of in the middle of those two. We want to decide whether or not to go big or go home, none of this half way.”

His slate, Letwin hopes, will bring something new to the union.

“The student union and the elections seem to follow a pretty similar path every year, and unfortunately […] a lot of students still have no idea what [UMSU] is, nor do they care,” he said.

“I think it’s important to change that, because it’s your money that’s going toward this every year, and the people who are involved would like to keep it as small as possible, because it’s easier for them to win and keep doing what they’re doing every year.

“We want to bring this to all the students. It’s your money — you should be deciding how it’s spent every year.”

A release from a frustrating few years

The Sadies get hereditary