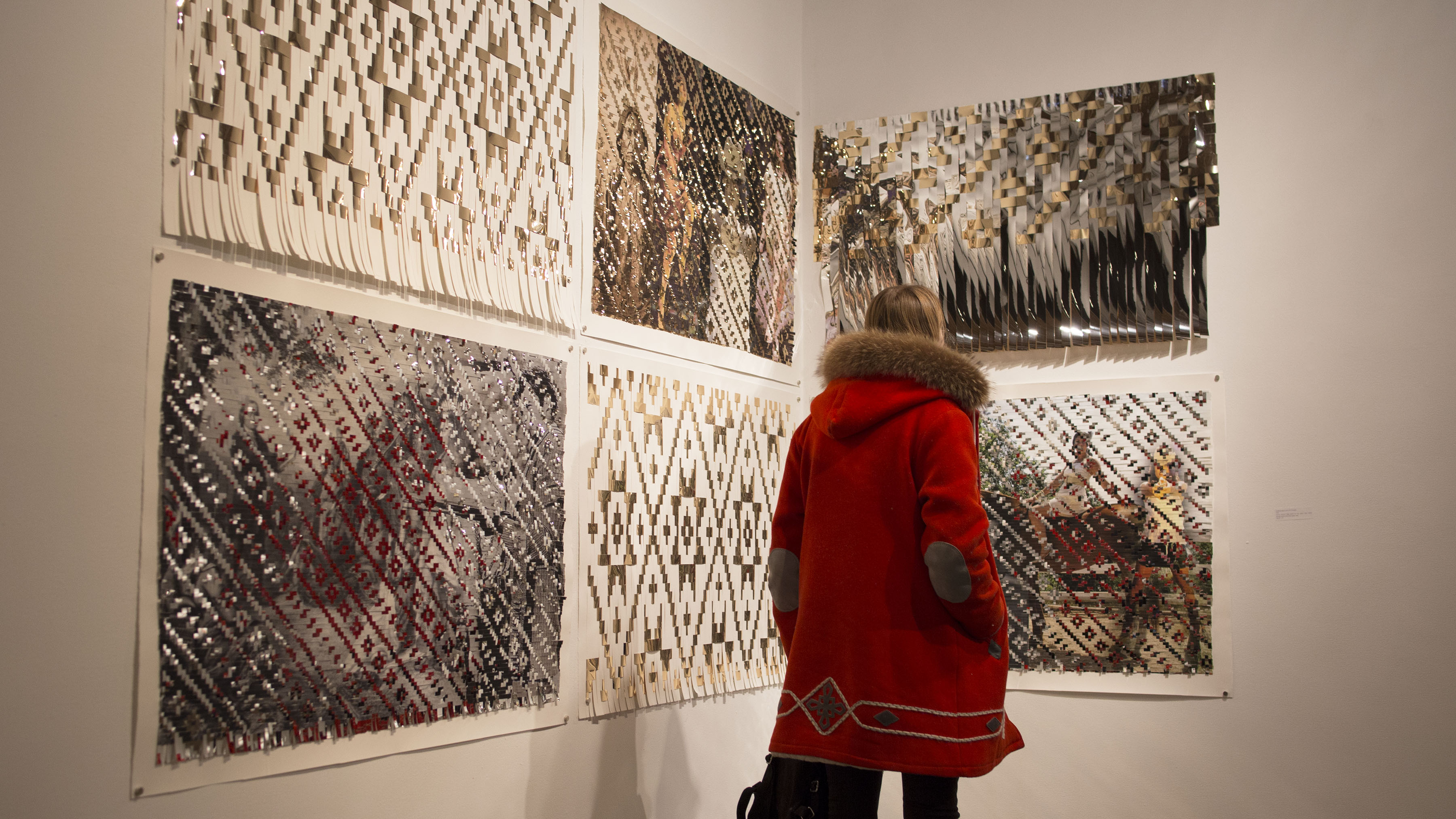 Sarah Sense’s scintillating new mixed media exhibition, Cowgirls and Indians, is being showcased at the Urban Shaman gallery from Feb. 1 to March 16.

Sense is a Chitimacha and Choctaw visual artist from California whose unique style of storytelling creates multidimensional artworks. Sense creates an eye-catching blend between her ancestral way of basket weaving and her digital landscape photography. Each piece is an interwoven collage of photographs and posters that create an intricate tapestry, revealing her Native American roots.

Sense’s photographs are printed on bamboo paper or rice paper then sliced into thin strips. She then weaves them together by hand using traditional basket weaving techniques. This gives a basket texture to her artwork, entwining conflicting, yet coexisting ideas.

“This time I wanted to also incorporate some of the images from the reservation, so most of the pictures have the Bayou [Teche],” she said.

The Bayou Teche is the main body of water on the Chitimacha reservation. She used these images in order to juxatpose the lasting beauty of her ancestral land with the stereotypical imagery of the cowboy and Indian archetypes.

“I began using photographs 15 years ago, when I was living in New York, and when I first started I was doing reservation landscape and I was weaving together landscapes as well as old family photographs,” Sense said.

“I noticed that there was actually quite a lot of cowboy and Indian iconography in fashion in particular, of course in Hollywood and in other visual media, that just seemed to be everywhere at the time.”

Sense began to collect vintage posters with this iconography.

“I then also photographed myself as my two personas, the cowgirl and the Indian princess,” she said. “So both personas were myself dressed up in this sort of fake fashion, the fake Indian fashion and fake cowgirl fashion, to basically play on these stereotypes.”

Sense decided to revisit these themes for her latest work given the current American political climate.

“Last year in 2018 in April, when I started making the work for this solo show, which has been travelling, I wanted to revisit those images and that concept of cowboys and Indians and even going a little bit deeper to gun violence and kind of more to the point with the racism that is triggered with those stereotypes, particularly for Native Americans,” she said.

“I’m using these really playful images then, playful Hollywood cowboys and Indian imagery, to try and bring up some really heavy issues that are very prevalent in the United States right now.”

“The cowboy part of it I think is then the history of the guns and the violence that comes with the cowboy and how that is still an exceptionally prominent part of what America is today,” said Sense.

According to Sense, some Americans are “becoming their own hero by becoming the cowboy, using their guns to kind of fight back and fight against whatever it is that they’re angry about.”

Sense’s inkjet prints allude to famous images, including tropes that have contributed to the misinterpretation of Native American culture. In viewing her portfolio, the audience is reminded of the ignorance surrounding Native Americans that has led to cultural genocide.

“These older stereotypes that are really incredibly important today with some of the political challenges that we’re facing,” she said.

“I’m looking a lot of those historical parallels and kind of trying to ask the question of well where does it end? When do we learn? And can we ever get beyond these stereotypes […] and get rid of the racism?”

Cowgirls and Indians will be showcased at Urban Shaman’s Main Gallery and Marvin Francis Media Gallery from Feb. 1 to March 16.

From summer camp to the spotlight