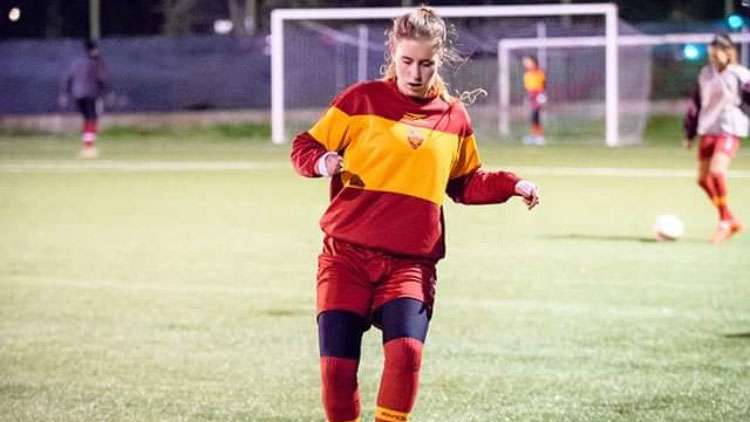 Bison women’s soccer recruit Katelyn Isfeld has some international experience on her resume.

The midfielder comes to the Bisons after training with the Wolverhampton Wanderers in England and Rome’s women’s team in Italy.

Isfeld — a Linden Christian School graduate — attended a camp in Winnipeg put on by the Wanderers and was then invited to a training camp in Arizona.

She was then invited to train with Wolverhampton in England for a week in May 2017.

“It was so crazy because obviously in Winnipeg we don’t take soccer as seriously as they do,” she said. “It was pretty crazy to be in a place where they take it so much more seriously, like how we look at hockey.”

Isfeld said she was struck by how the level of play matched up to what she had seen in Canada.

“Honestly I was surprised because their level of play isn’t that much better than ours is,” she said. “I was expecting them to be just amazing, but I honestly think that our Canadian teams could actually match up with them.”

Isfeld was able to keep up with the pace of play against English players on the pitch.

“I could compete with them,” she said. “I was not as good as them but I could keep up which was a pretty good feeling and be able to compete with those girls.”

Only months after returning home from England, Isfeld got a chance to go to Italy. Diego Reveco, a Winnipegger who plays in Italy, came with his coaches to run a camp in Winnipeg in the summer of 2017.

Isfeld impressed at the camp and was invited to train for a week in Italy with soccer academy Pro Calcio. She was then invited to spend a month with Rome’s women’s team.

In Rome, Isfeld got to participate in scrimmages with the national club and attended a match as well. Rome’s women’s team plays in Serie A, the highest division in the country.

“That was really cool because you’re with all these players and they actually get paid for what they do,” Isfeld said. “So you’re playing with like 25-year-old women who are all competing for a spot on this team so it was really intense.”

Compared to playing in England, Italy had a different challenge — the language.

“That was way rougher than being in England because you didn’t understand any of the coaches so it was really hard,” she said.

During her experiences across the pond, Isfeld said she realized the dream of playing professional soccer is possible.

“I think the biggest thing I took away was the dream of playing pro soccer isn’t actually as far away as you think that it is,” she said.

“It’s always just been something that I thought of wanting to do, like the ultimate dream but I never thought I could actually make that.”

Bisons fall in OT to Victoria