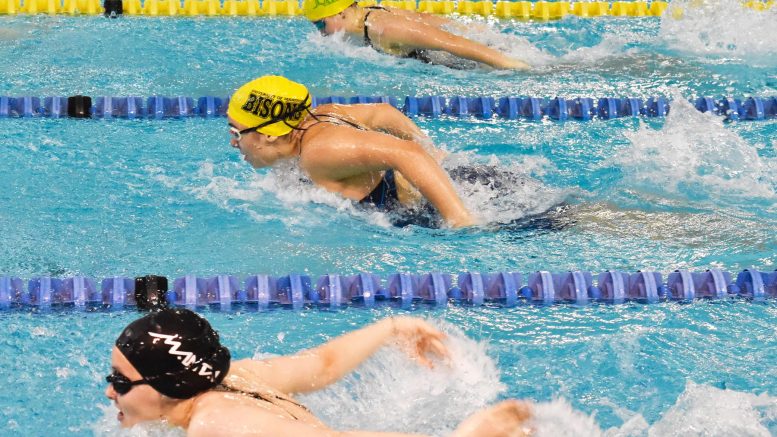 The Bisons swim team attended the yearly Canada West Championships this past weekend. Hosted this year at the University of Lethbridge in Alberta, the championship yielded a varying array of results spanning over the three-day swim meet.

With the high expectations to perform leading up to this swim meet, the herd swam as to be expected when going from low-altitude training to high-altitude racing. Despite this challenge, the herd performed well.

The meet was a success for veteran Bison swimmer Dora Modrcin, who achieved three podium finishes and contributed 63 points to the team’s overall score.

Placing third in backstroke, however, came as no surprise for the sprint backstroke phenom, who placed first in the same event in last year’s Canada West Championships.

Mozill — another backstroke phenom — achieved her podium finish in the 100-metre backstroke with a final time of 1:01.06, placing third.

Both Mozill and Modrcin were indispensable this meet, achieving multiple podium finishes and contributing the greatest number of points for the team.

Another notable performance was swum by second-year swimmer Kelsey Fillion, who achieved a fourth-place finish in the 100-metre freestyle with a time of 56.37, taking off an impressive 0.53 seconds from her prelim time.

The men’s portion of the team stepped up to the plate this championship meet, with fourth-year swimmer Carson Beggs performing well in his 200-metre breaststroke. Beggs placed 11th with a final time of 2:19.19, reducing his preliminary time by a whopping 3.27 seconds.

Rookie Ella Howe also stood out this competition, consistently making finals and stepping up to the plate as an instrumental part of the team.

This year, the swim team finished the meet with a total of 365.5 points, falling short of last year’s 2021 Canada West Championships where it racked up a total of 575 points.

With the team finishing this year’s championships with significantly less points than the year before, it can be assumed that the lack of points was, at least in part, an altitude problem.

The team really persevered in this competition despite the less than ideal circumstances — earning medals and placing well in several events despite not achieving all the podium finishes that were expected.

With the 2022 Canada West Championships now over, the Bisons can look forward to more fast racing and training going into the holiday season, as the team’s next competition is just around the corner.

Swimming fans can look forward to the annual Prairie Winter Invitational swim meet back home from Dec. 16 to 18.

The Duckworth Challenge: looking back