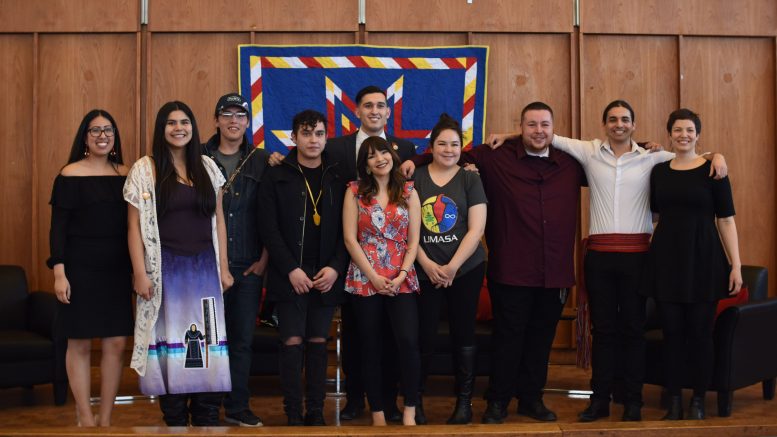 The official launch of the ReconciliACTION campaign took place on March 27th in the Great Hall at University College.

The ReconciliACTION Campaign launched at the U of M March 27 as one of a number of events lined up to mark Indigenous Awareness Month.

The ReconciliACTION campaign was launched with the objective of ensuring the U of M fully implements the Truth and Reconciliation Commission’s (TRC) recommendation number 16, which urges “post-secondary institutions to create university and college degree and diploma programs in Aboriginal languages.”

In November of last year, UMSU passed a motion encouraging the university to carry out and foster the recommendations related to educational institutions as laid out in the TRC.

Noah Wilson, UMSU Indigenous students’ representative and co-president of the University of Manitoba Aboriginal Students Association, led the initiative along with UMSU councillors who were responsible for tabling the motion at council’s Nov. 9 meeting.

Wilson also challenged the U of M administration to not only have conversations surrounding truth and reconciliation, but to be proactive in implementing Indigenous language degree programs.

The event started with an honour song followed by an opening prayer ceremony and consisted of a panel discussion led by students, followed by a second panel led by “Indigenous visionaries.” Both panels discussed the importance of Indigenous language revitalization in Canada.

Wab Kinew, leader of the Manitoba NDP and one of the “visionary” panelists, echoed Wilson’s words and encouraged those in attendance to be proactive in actualizing this call to action.

“I know there is a lot of hopeful rhetoric around language revitalization,” Kinew said, “but I would ask that everyone’s actions and commitments to the outcome of language acquisition for young people in our communities match the rhetoric.”

He said the same dedication and rigour should be emulated in revitalizing Indigenous languages, which is practiced in learning and teaching other languages.

Kinew also offered several recommendations on how Indigenous languages could be revived in Canada, including the use of apps.

Although the ReconciliACTION campaign is specific to the U of M, the Canadian Federation of Students will also advocatefor Indigenous languageprograms to be created in post-secondary institutions across Canada later this year.

U of M collecting memories of life in Tache Hall

Faculty of science revamps rules around academic probation and suspension