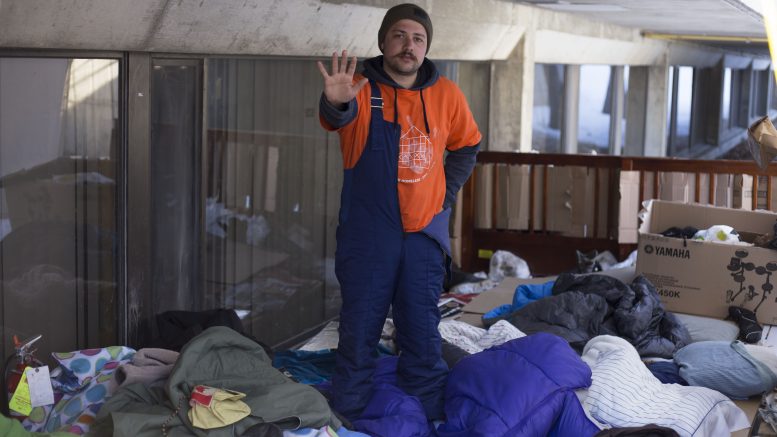 Six U of M students slept in front of UMSU University Centre for five days last week to raise funds for homeless youth in Winnipeg.

Five days for the Homeless, an initiative started by the University of Alberta’s school of business, has now become a national campaign in which 22 post-secondary institutions across Canada participate in an effort to fundraise for the homeless in their local communities.

Six Students – Austin Coombes, Michael Catanese, Julia Krovats, Aaron Menon, Emily Baker, and Quinn Desrochers – signed up to be “sleepers” for the U of M’s 2018 campaign.

Coombes said the group set a fundraising goal of $20,000, and as of March 16  – the final day of the campaign – the sleepers had raised more than $18,000, surpassing previous year’s goal.

“We’re just over $18,000 right now, and that’s not including some sponsors that we’re still waiting on and things like that. So we’re doing pretty well and pretty excited about that,” Catanese said.

According to the group’s Facebook page, the group raised $20,000 through donations and sponsorships collectively.

The sleepers had to abide by a few rules during the time spent outside, which included leaving behind any form of identification, money, cell phones, and laptops – except during classes. The participants had no access to showers, and were only allowed to consume donated food items and drinks.

Krovats said the close “replication” of homelessness was strategic, to encourage people to donate to their cause.

“We know this is very different from what reality is like when you’re homeless but we’re mainly just trying to create some buzz around this fundraiser and get people to come out and see what’s going on and encourage more people to donate money,” said Krovats.

Coombes added that one difference was that while they were camped outside, friends came around to offer moral support, noting that homeless people often lack this kind of support network.

Menon, one of the participants, said the restrictions could not be compared to actual homelessness, particularly the mental health aspect.

“We have people here that come and they’ll support us, they’ll bring us food, because we can’t eat unless it’s donated to us,” Menon said.

Menon added that people were surprised to hear they would indeed sleep outdoors over the five days.

“Think about how many youth and people across Winnipeg and the rest of Canada do this every single night,” he said. “If we can do it five nights and that’s what we have to do to get your attention, sounds great, I’ll do it, no problem.”

Menon said the campaign also motivates students, especially those newer to the university community, to become involved in similar initiatives that aim to help the less fortunate.

All funds raised will be donated to the Rsource Assistance for Youth, Inc. (RaY), a “non-profit street-level agency”  dedicated to helping homeless youth.

Menon expressed admiration for RaY, observing that the agency was “really making a huge difference in the lives of Winnipeggers.”

As of 2016, RaY had moved 137 youths off the street and provided them with permanent housing, alongside developing employment and training opportunities for youth.

Violence against women high in Manitoba

U of M chancellor re-elected to another term

Student take an icy plunge for the United Way