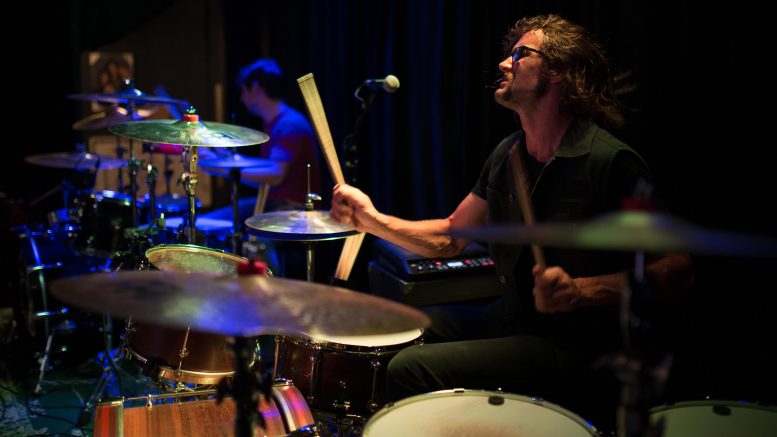 Ian Clements of Solhounds performing at The Good Will Social Club on September 22, 2017.

The release is sandwiched between two shows at The Handsome Daughter – a “sneak peek” party March 15 and an official release party March 17 – before heading on a release tour in Ontario.

The band’s current line-up has been practicing and performing in Winnipeg for two years, but have waited to release any original music. New lead vocalist Elise Roller said it has been well worth the wait.

“I’m glad we were patient and took our time because the stuff we’re releasing now, that’s our sound,” Roller said.

The two songs being released are “Body Bandit” and “I Taught Him (Be a Man),” both songs that embody the band’s support for the feminist movement and message of equality and empowerment.

In the song “I Taught Him (Be a Man),” Roller sings about her personal experiences of teaching men to “grow the fuck up,” backed by her band consisting of Ian Clements, drums, Morgan Davis, bass, and Andrew Bontey, guitar.

Her screaming vocals are distinct above the droned-out heavy stoner rock. Driving guitar riffs and a distorted bass guitar sound are backed by energetic and punchy drumming.

Roller said she started writing the song about raising her son, but ended up changing the direction of the song because she wanted to make the song applicable to more women.

“At the end of the day, women have been teaching guys how to be men for all of existence – whether it’s their sons, their brothers, their boyfriends, or even their fathers,” she said.

She called it her break-up song.

“Everyone needs a good break-up song and there are just too many sad ones out there,” she said.

“This one is for the powerful women who walk away from something toxic and know they can do so much better for their life.”

Roller joined the band about a year after she moved from Calgary to Winnipeg in 2015. When sitting in a café in New York City, she saw a post from Clements on Facebook looking for a new vocalist. She said she was apprehensive at first but ended up contacting him.

“So, I was sitting there and I was like ‘I can’t play guitar, and I’m not a guy, so it’s going to be weird,’ but I decided I’d message him anyway,” Roller said.

“He knew me from [my former band] Go For The Eyes and basically said to the [other band members] ‘This chick doesn’t even need to audition, she’s in,’” she said.

Roller is an experienced musician, touring and releasing music with her former band in Calgary. When it came time to develop Solhounds’ sound, Roller was upfront with her bandmates about what direction she wanted to go in.

“I said ‘If I get into anything, it’s going to have to be [with] people who want to work with me and mesh with me musically and listen to me,’” she said.

The band started by reworking old Solhounds material with guidance from Roller. She said it has been the most collaborative writing experience she has ever had with a band.

“No one is telling anybody what to do,” she said. “We all do our part.”