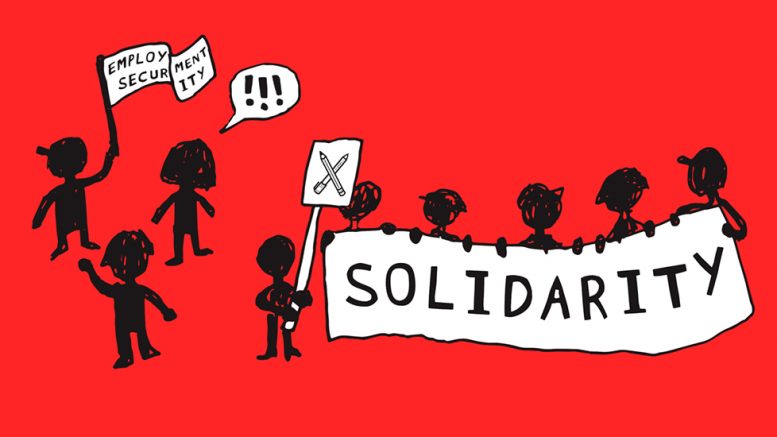 Universities across the West are seeing red.

Widespread strike action has been taken by unionized academics throughout the United Kingdom following administrative attempts to restructure pension programs within universities. Professors, lecturers, support staff, and postgraduates under the University and College Union have been picketing intermittently since Feb. 22, with plans to continue until March 16.

Yet the academics whose necks are on the line are not tenured or tenure-track professors. Rather, it is the growing mass of contract labourers known as instructors, sessionals, and teaching and research assistants whose exploitation maintains the academy as we know it today.

Having already lost it all – compensation, job security, strike rights, and benefits – these groups should be most ripe for hitting back at administrations.

Following such a call to arms are contract academics at York and Ryerson universities, where Canadian Union of Public Employees (CUPE) locals 3903 and 3904 have authorized strike mandates. Local 3903 at York began its strike on Monday.

This course of action is one contract lecturers should take across Canada.

The current academic terrain is harsh with uncertainty and precarity, existing in a tight labour market flush with graduates who lack employment opportunities. Mind, this is due to the funding decisions of centralized administrative bodies who capitalize on the availability of cheap labour offered by desperados with academic credentials. Rather than spending money on tenure-track positions, thus spurring the healthy growth of academic units, universities rely on contracted instructors who are now estimated to make up more than half of undergraduate teaching positions in the academy.

At the University of Manitoba, such prestigious positions offer a sessional wage of just over $5,300 per three credit hour course taught. The illustrious collective agreements currently covering our contract academics – under CUPE local 3909 – also strips members of their right to strike.

Not only does the current arrangement for contract academics at the U of M have individuals teaching numerous bloated introductory courses, sometimes filled with hundreds of students and producing a grading load that could conceivably double a 40 hour work week. U of M contract academics are also dictated not to take strike action, that often being the sole course of action for workers to have their grievances heard by administrators disinterested by matters which fail to feed directly into the university’s larger profit motive.

If we wish to be enrolled in an institution which respects the academic pillars upon which it rests, then we must agitate for the spread of strike action across Canada by precarious labourers and their tenured allies in the academy. While union members at York take action, we at the University of Manitoba should pay close attention and be sincere in our solidarity. Numbers are crucial to any strike, and it is only through building solidarity among and between academics that we can gain sufficient numbers to have our demands for a better university met.

And the numbers game is increasingly looking like the last bet for unions. In 2017, the Ontario government legislated university and college professors back to work following five weeks of strike action. This is clear evidence that negotiations with administrations are ultimately useless. If the university knows government will step in as its enforcing arm when push comes to shove, then striking union members – tenure track, tenured, or otherwise – will never stand a chance.

Unions representing contract labourers and faculty professors must take a principled stand, together, against administrations that would have seeking employment turned into a game of Russian roulette for prospective long-term academics.