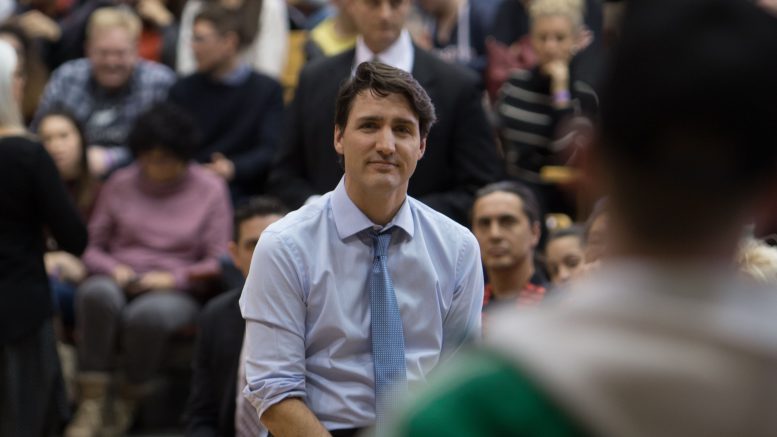 Prime Minister Justin Trudeau fielded a range of questions for over two hours during a town hall event at the University of Manitoba’s Max Bell Centre on Feb. 1.

Trudeau addressed questions on a variety of issues, including the Canada Summer Jobs (CSJ) program, pipeline construction, immigration, Child and Family Services, missing and murdered Indigenous women and girls, and reconciliation with Indigenous peoples of Canada. In December, the federal government announced that organizations seeking federal funding to employ students through the CSJ program will be required to sign an affirmation on abortion and LGBTTQ* rights.

The move sparked a backlash from religious organizations that called the requirement to check a box affirming respect for the values set out in the Canadian Charter of Rights and Freedoms discriminatory and fascist.

Trudeau said faith-based groups have had “an extraordinarily beneficial impact” on communities, and assured the audience that they will not be stripped of federal funding due to their religious beliefs. The Prime Minister was treated to a full house of eager Winnipegers. Photo by Asha Nelson.

“However, there are certain groups that are specifically dedicated to fighting abortion rights for women and inclusion of LGBTTQ* communities,” he said.

“And that is wrong, that is certainly not something that the federal government should be funding summer students to do.”

“We are not rolling back the clock on women’s rights.”

Pipelines and the environment

Clayton Thomas-Muller, an advocate for Indigenous rights and an organizer in the fight against climate change, began a question by mentioning he supports the recent decision made by the British Columbia government to limit the transportation of bitumen through the province.

Under Premier John Horgan, the B.C. government proposed a new set of regulations on Jan. 30 to place limits on the transport of the oil sands product “until the behaviour of spilled bitumen can be better understood.”

While Kinder Morgan’s Trans Mountain expansion was not mentioned in the announcement, the legislation might have a direct impact on the project, which is expected to double the shipments of oil from Alberta to B.C.

Thomas-Muller said First Nations communities and municipalities in B.C. have made it clear that they do not consent to the Trans Mountain Pipeline and called on Trudeau to support the provincial government. The question was met with cheers from the crowd.

Trudeau responded by acknowledging that while provinces have their own environmental policies and programs, his “job at the federal level is to always stand up for the interest of all Canadians.”

“You have to take care of both of them fully at the same time.”

Stressing on the importance of balancing both, Trudeau said a thorough consultation process was undertaken by the federal government before the pipeline was approved.

He said approval of the pipeline is “in the national interest of all Canadians” and added that the Liberal government made necessary steps to invest in the “historic” Oceans Protection Plan in 2016 in addition to launching a Pan-Canadian framework to reduce emissions by setting a minimum price on carbon.

Only two provinces – Manitoba and Saskatchewan – have not signed on to the national climate change framework.

“We need to both create a better future for Canadians and protect the environment,” said Trudeau.

During his town hall in Edmonton following the Winnipeg stop, Trudeau assured the residents of Alberta that Kinder Morgan “is going to be built.” Among the questions addressed included the state of Child and Family Services, immigration, and reconciliation.

One commended Trudeau for his efforts in helping create a safe passage to Canada, in collaboration with Rainbow Railroad, for many LGBTTQ* Chechens who were being tortured and killed in Chechnya.

“Would the Prime Minister be willing – I understand what you are saying about specific cases – but would you be willing to intervene and advocate [to] the immigration minister to please stop the deportation to Nigeria of our lesbian friend?” asked the audience member, adding that their “friend was given an unfair refugee hearing by a homophobic adjudicator.”

“If she is deported this month, she will face imprisonment or death. There is a warrant out for arrest for being a lesbian.”

She asked if Trudeau would “outline how to help our friend be given safe passage to Canada.”

Trudeau said the system in place follows a certain set of rules and process while “at the same time leaving place for compassion.”

He assured that the minister of immigration, refugees and citizenship would take a look at “that specific case.”

“We have an obligation to hear them, understand them and perhaps look where mistakes have been made in the past,” Trudeau said.

How to be a good ally to survivors of sexual assault

T’was the year of the lockout… [text only]

Solve sexual violence in military by defunding it

Trudeau’s approval of the TMX reveals his true priorities