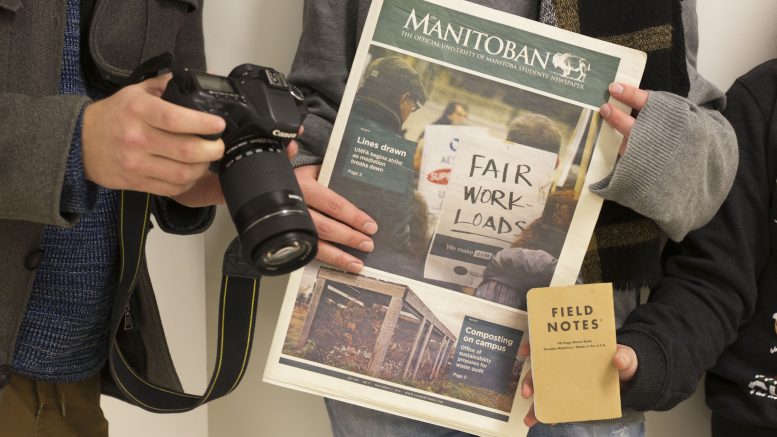 There are important stories in the newspaper you are reading right now.

Flip or scroll to the news, sports, or arts sections of this paper and you will find articles on peoples’ passions, triumphs, pitfalls, and tribulations.

This newspaper strives to hold politicians and bureaucrats accountable, and its reporters and editors keep their ears to the ground to cover events and news in your community.

And this newspaper has been doing so for 104 years.

This month, however, the Manitoban’s future was nearly thrown into jeopardy when a single student union councillor proposed a motion to hold a referendum on the newspaper’s funding.

Thankfully, the outpouring of support for the Manitoban on social media and the lack of confidence from fellow councillors pushed the lone student politician to withdraw his motion.

For a brief period of time, it seemed as though the intense defunding challenges facing local and national journalists across the country were about to hit student media. But is student journalism really journalism worth saving from those who would rather see it go?

After all, student newspapers across the country rely on student levies – a portion of student fees set aside from tuition – to run their daily operations.

Just last month, an article from J-Source, a collaborative online project by journalism schools all over Canada, delved into that very question.

The article asked the question: “Is this really journalism?” to a series of student journalists across the country.

The answer to that query came back an unequivocal and unapologetic “Yes.”

Just in the last year or so, the Manitoban has covered a number of important stories that have had real impacts on students in the province.

During the 2016 faculty strike, constant updates from the Manitoban, from both the Fort Garry campus and the provincial legislature, kept students informed of how negotiations were progressing to get students back in their classes.

In February 2017, the Manitoban received a document that confirmed the province had hired UMSU vice-president internal Adam Pawlak as a political aid for the provincial government.

Soon after the newspaper reached out to Pawlak for comment, he resigned from his executive position.

Additionally, the newspaper’s coverage of tuition hikes that are slated go into effect next year had barely any competition from established news organizations like CBC News and the Winnipeg Free Press.

Across the entire country, student journalists are breaking stories that are having significant impacts on the university communities they serve.

In October 2017, the University of Victoria’s student newspaper, the Martlet, reported that their student society’s mishandled health insurance switchover led to one student losing access to her $250,000-per-year cystic fibrosis medication.

The Martlet was also the first outlet to report on the failures of the University of Victoria’s sexualized violence policies in 2016.

Soon after, the B.C. government passed a law that forced post-secondary institutions to adopt policies to prevent and respond to sexual violence on university campuses. Manitoba’s government adopted similar legislation in October 2016.

Over on the mainland, the University of British Columbia student newspaper, the Ubyssey, has held the university administration and student union leaders to account in true form.

Across the country, in Toronto, journalists from the University of Toronto’s student-run paper, the Varsity, gained first access to the U of T professor whose opinions on gendered pronouns made international headlines.

However, it is not just meaningful journalism that student newspapers are producing: some of Canada’s most notable journalists got their starts in campus reporting.

The National Post’s Andrew Coyne began his political musings as the comment editor of the Manitoban, and CBC foreign correspondent Nahlah Ayed also began her journalism career in the pages of the ‘Toban.

David Cochrane, a senior reporter in CBC’s parliamentary bureau, worked at the Muse, the Memorial University of Newfoundland’s student paper.

CBC Radio’s As It Happens co-host and legendary Canadian journalist Carol Off was a staff writer for the Gazette, the University of Western Ontario’s newspaper. Toronto Star and Maclean’s columnists Susan Delacourt and Paul Wells also launched their careers at the Gazette.

CBC’s Piya Chattopadhyay worked at the Sheaf at the University of Saskatchewan, and the Queen’s Journal, Queen’s University’s student paper, produced former editors-in-chief of the Toronto Star and the Globe and Mail.

So the next time you pick up a copy of the ‘Toban – and bless you for still reading the print edition – or read articles on the paper’s website, remember what that small share of your student fees are contributing to: true journalism.

No, the Manitoban isn’t perfect. Nor is it a bastion of pure objectivity. No student newspaper anywhere in the country is. We are students, too.

We are still learning.

The next generation of Canada’s journalists are working for your university newspaper. If their fellow students do not support them, then no one will.