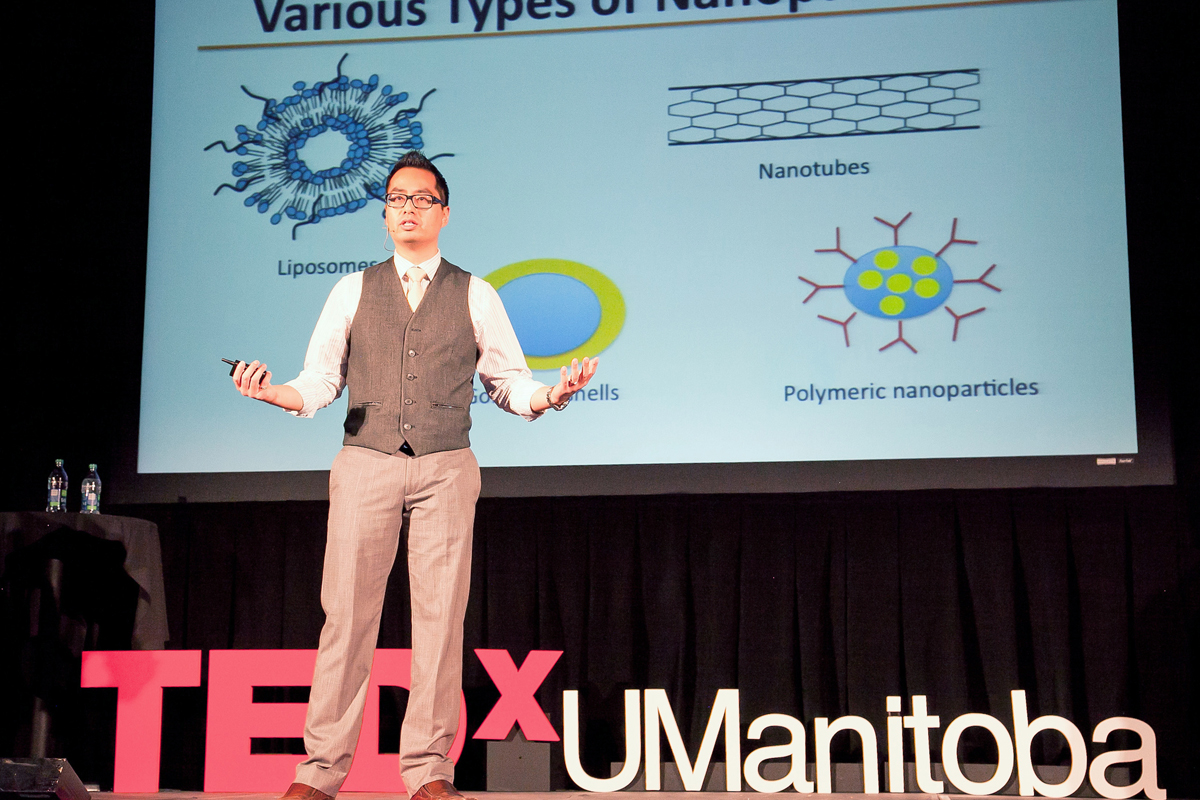 On Nov. 4, 2014 the University of Manitoba hosted its first independently organized TEDxUManitoba event. The event invited nine speakers from varying disciplines to discuss their research and share their ideas with an audience of 100 individuals. Out of the nine speakers, seven gave their presentations on scientific topics and research.

Of the science speakers, the first to present was Ahmad Byagowi, a PhD candidate from the department of electrical engineering, on making space accessible and understandable. Through a small satellite, his team is exploring big ideas such as panspermia, the theory that life came from other planets, by exposing tardigrades to the vacuum of space. He believes this experiment, if successful, could build evidence that perhaps life travelled to Earth by a meteorite from another planet.

Next was Debbie Kelly, a Canada research chair in comparative cognition, who spoke on the bird brain. Her research involves observing bird behaviour in categories such as problem-solving capabilities, spatial memory, and social interaction. During her presentation she showed videos of birds solving problems by manipulating tools, storing caches, and being able to locate them quickly and accurately months later, as well as displaying an awareness of when other birds were watching them store their food.

Emmanuel Ho, assistant professor of pharmacy, offered his presentation, “Nano-Medicine: The Way of the Future?” During his presentation he told audiences about the importance of nano-medicine, medicines with molecules that are nanometers in scale,and how it can be beneficial. In cancer therapy, nano-medicines can accurately treat cancer cells while healthy cells remain untouched, reducing the side-effects and damage usually caused by current chemotherapy treatments.

Jeremy Strong is not a scientist, but his research for his PhD in English involves science fiction literature. In his topic, “How Imagining the End of the World Might Help Us Save It,” he discusses many examples of literature that express humanity’s fear of certain technologies destroying us, or hope that they might save us. An example includes artificial intelligence and robotics, both of which have been portrayed in stories where they end humanity or offer it salvation.

Michael Paterson is the chief research scientist at the International Institute for Sustainable Development -Experimental Lakes Area. He and his team of scientists perform experiments on isolated lakes to observe the effects of human activity on them. His team has observed the effects on phosphorous on algae blooms.

The last, but most certainly not least, was David Barber, research chair in arctic system science. His presentation was titled “Seven Surprising Results from the Ongoing Reduction of the Arctic Sea Ice Cover.” Barber’s talk focused on the loss of sea ice in the arctic and the implications this loss has.

During the breaks, groups of individuals congregated to discuss the research they had just learned about, which is exactly what the TEDxUManitoba organizers wanted.

Organizer Mohamed Ouf said he hoped the event would highlight the University of Manitoba and all the things happening on campus. He has previously been involved with TEDxCairo.

The annual TEDxUManitoba is an independently organized event. Anyone interested in presenting at next year’s event or being in the audience should visit TEDxUManitoba.com for updates.

On the importance of vaccines: Not taking part puts us all at risk