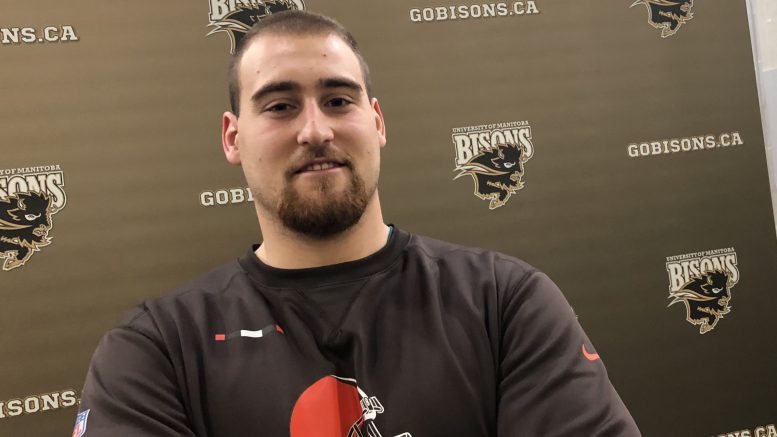 As the age-old saying goes, Geoff Gray is indeed staying in school, for now.

The former Bison offensive lineman and current Cleveland Brown, Gray has returned to the University of Manitoba to finish his bachelor’s degree in mechanical engineering.

“I’ve spent five years on [my degree] beforehand, and with engineering there is a clock on it,” he said.

“It’s not like I can come back five years from now, finish two classes and be good to go, so I had two years left to finish it so I really want to get it done.”

Gray said the U of M has been accommodating of his schedule, and since there is technically a time limit on when he can finish his degree, he’s better off completing it now rather than later.

In April of 2017, Gray was signed to a contract by the Green Bay Packers, kicking off a whirlwind rookie season. Gray did not make the cut with the Packers, but signed on to the New York Jets practice roster in September. Just before Christmas, he signed with the Cleveland Browns. Even though he did not play in the final three games of the season, he said he is in a good spot for next year.

“I’m happy where I ended up in Cleveland and I think I have a good position with them going into next year to make the active roster,” Gray said.

“It was a lot more than I expected necessarily, you don’t go into it expecting to be with three teams in three months, and that’s not something you’re accustomed to with university sports where you don’t change during the season, so it comes with the territory.”

Gray said he had a positive experience with each team, but the best food was in Green Bay.

“They just had massive kitchens, the best quesadillas I’ve ever had. They had a good smoothie bar,” he said.

Gray is fan of Mexican dishes, and said he is better at making fajitas than many places in Winnipeg.

“I think the best fajita I’ve had in Winnipeg is from myself,” he said.

“JC’s Tacos, I haven’t had a fajita from there but they have some excellent tacos,” he said. “Mexican hot sauce stuff like that, big fan of that. They have a giant burrito, actually.”

Offensive linemen spend a lot of time eating, and, by extension, cooking. Standing at six-foot-five and weighing in at 315 pounds, Gray is no exception.

“I kind of like things where I’m improvising with leftover stuff like that,” he said. “If I try to actually think of something right from the start I get a little carried away and do too much but simple things – meat, vegetables, roasted vegetables – are always a good way to go.”

In addition to his on-field accomplishments, Gray was named a U SPORTS Top 8 Academic All Canadian for being, as he likes to call it, “best in books and sports.” Gray, named an Academic All Canadian every year he was with Manitoba, is proud of the distinction, observing the academic side of university sports can often be overlooked

“This past year I did even better in school and in football, so I was recognized for excelling at both,” he said.