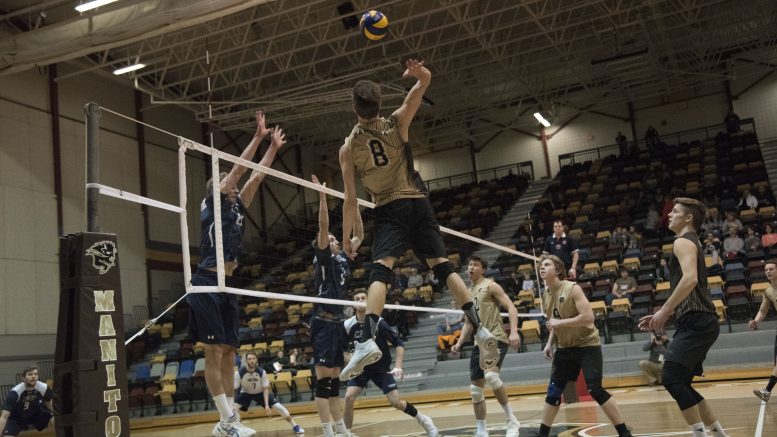 The women earned a split in a series filled with playoff implications, winning 3-1 on Friday, but lost in straight sets on Saturday. The men dropped both of their matches, losing 3-2 on both Friday  and Saturday.

On Friday night, the Bisons won the opening two sets and slipped up in the third, losing 25-20. Manitoba regrouped and finished off the Cougars in the fourth set by a score of 25-20.

On Saturday, the final point of the first set, Cougar outsider hitter Alex Donaghy placed a cheeky tip in the back corner after a long rally to end it.

Manitoba appeared to turn it around in the second set starting off with a 5-1 lead, but that lead was soon erased. Mount Royal clawed their way back after a prolonged rally with some great digging and blocks, but Donaghy sliced through a Bison block to eat into Manitoba’s lead. Mount Royal eventually won the set 25-21 off a Bison attack error.

In the third set, the first few points were closely contested, but the Cougars grabbed a 13-10 lead and never looked back. The Bisons did get some clutch digs from Brittany Habing throughout the set but fell 25-18.

“At this point in the season it’s disappointing when we’re, like, neck-in-neck for a playoff spot. Give [Mount Royal] credit, they knew they had to fight for their life and they did it.”

The Bison men had a tough weekend, losing both games in similar fashion.

On Friday the Bisons lost the first two sets, but fought their way back to force a fifth set. The Bisons found themselves down 7-1 in that fifth set before they started to rally, but it was much too late, as Manitoba eventually fell 15-10.

On Saturday the match followed a similar storyline to the night prior, as the Bisons could not find a way to bury the Cougars in the fifth set after winning the previous two.

The first set started off as a seesaw affair, with neither team able to grab a solid lead. The Cougars eventually pulled away to win 25-20.

The second set was all Cougars, who pounced to a 9-3 lead early, forcing Bison head coach Garth Pischke to call a timeout. That did not seem to help, as the carnage continued for the home side, who were down 16-6 at the technical timeout. Manitoba attempted a comeback, but it was not nearly enough as Mount Royal won 25-18.

With their backs against the wall in the third set, the Bisons jumped out to a 7-3 lead. The Cougars clawed their way back into the set to make it close, but Manitoba stuck with the program and a Dustin Spiring block won the set for the home side 25-18.

Manitoba won the fourth set 25-13 to force a fifth and decisive set. The fifth set was back-and-forth, with both teams exchanging points. With the score tied at 11, the Cougars got a good run of serving from Nick Lightfoot and took the match after winning 15-11.

Manitoba made a host of errors, which in the end, cost them the match and gave the Cougars their fourth straight win.

“It really doesn’t matter who’s on the other side of the court,” Pischke said. “It could be six mannequins, if you hit the ball out, you can’t score.”

The Bison volleyball teams will head out to Regina to play the University of Regina Cougars on Feb. 9-10 .