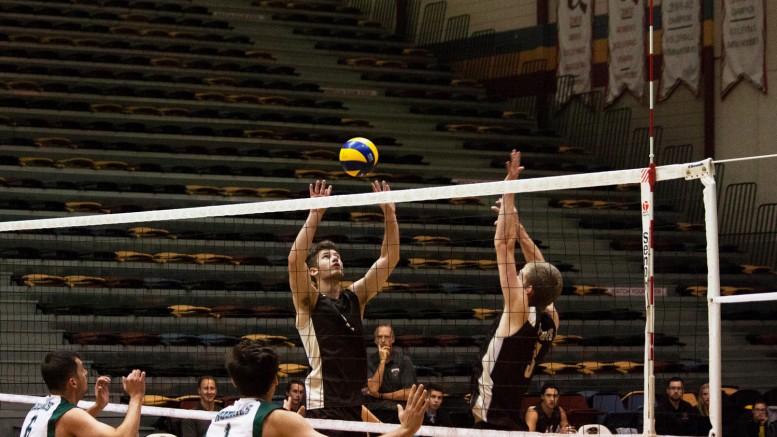 Bison volleyball is back, and both the men and women faced off against the University of British Columbia-Okanagan this weekend in two game sets at home. The men swept their encounter with the Heat, while the women dropped both of their decisions.

The Bison men’s volleyball team showcased their talents this weekend with no signs of rust after the winter break. Manitoba started off 2016 with a dominating display on Friday, winning three straight sets (25-13, 25-21, 25-15).

In the opening set, the Bisons carried the play throughout, exploding to a 12-point lead. The second set featured back and forth action, with the home side earning points off of long rallies. Manitoba finished off UBC in the third set by winning by 10.

Devren Dear led the herd with 16 kills – the most of anyone on the court. Dear chipped in on the defensive side too, earning six digs.

The Saturday afternoon matinee started off a little rough for the Bisons, as they dropped their first and only set of the weekend. Manitoba ended up storming back and winning 3-1, however (17-25, 25-16, 25-16, 25-9). The herd crushed the Heat in the third set specifically, winning by a huge 16 points.

Dear once again led the Bisons with 17 kills on the night. The fourth-year veteran is now averaging four kills per set on the year. Luke Herr managed to smack home three aces as well. The home side combined for seven aces, in comparison to UBC’s one.

The men have a bye this weekend and will play host to the Trinity Western Spartans on Jan. 22 and 23, looking to continue their four-game winning streak.

The new year didn’t start off well for the Bison women’s volleyball team, who lost both of their opening games of the second half of the season.

Friday night saw the Heat dominate completely, outscoring the Bisons 75-37. The visitors easily took every set by a commanding margin (25-11, 25-14, 25-12). Kalena Schultz led the Bisons in kills with a meagre four. The Bisons only managed to get 16 total kills on the night.

On Saturday the story was much the same. They were once again swept aside by the Heat and dropped three straight sets (16-25, 13-25, 16-25). Caleigh Dobie led everyone on the court with 10 digs, proving once again that she is an invaluable member of the women’s squad.

The pair of losses see the Bisons extending their losing streak to three games and still sitting in the basement of the Canada West.

The women also have a bye this weekend and will take on Trinity Western at home on Jan. 22 and 23. The Spartans are currently tied for first in the Canada West and will prove to be formidable for the Bisons.

The man with the plan