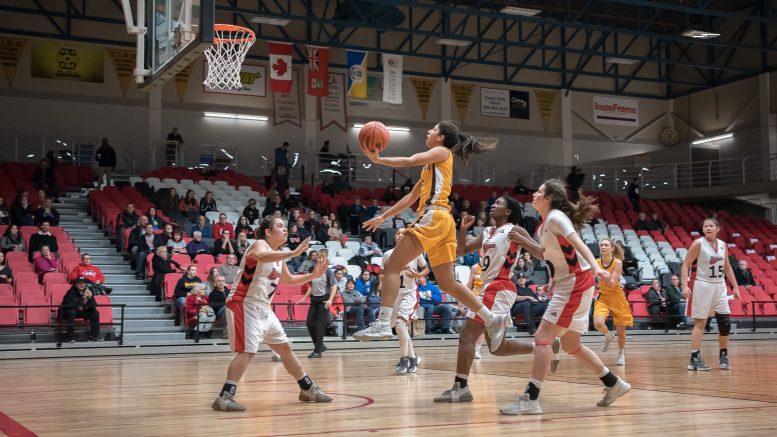 Bison Claire Harvey goes for a layup against the University of Winnipeg Wesmen.

Over in Abbotsford, B.C., the Bison men’s and women’s basketball teams were wrapping up their regular season with a series against the University of the Fraser Valley Cascades.

The Bison women clinched the playoffs for the first time since 2009 with a 79-74 win in overtime on Friday. The women fell on Saturday night 80-56 to conclude their regular season.

Claire Harvey entered the top 15 in Canada West record books for best block average in a single season, averaging 1.95 a game. Taylor Randall finished the year averaging 16.8 points per game, 12th best in the Canada West. The Bison women will play a play-in game against the University of Alberta Pandas in Edmonton on Feb. 10.

On the men’s side, the Bisons clinched a home playoff game with their wins over the Cascades, 67-46 on Friday and 82-66 on Saturday.

The Bisons finished the year with a 12-8 record, and will host a play-in game against provincial rivals the University of Brandon Bobcats on Feb. 9 at the Investors Group Athletic Centre.

Join the charge, support the Bisons