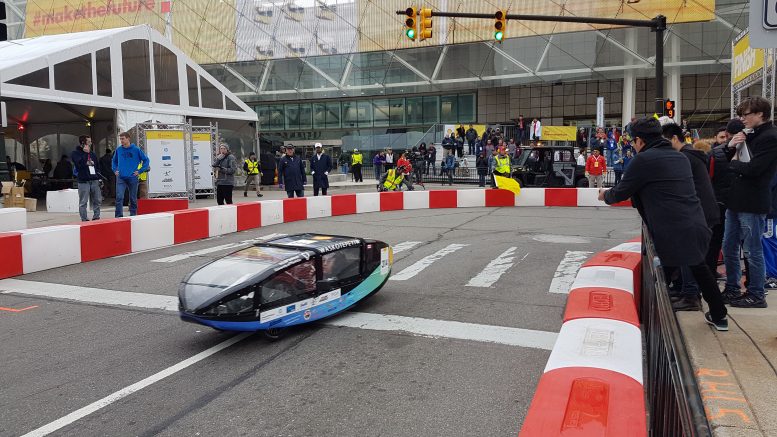 By Shaden Abusaleh | Image by provided by Alan Huynh January 17, 2018

UM ecoMotion – a design team of over 50 engineering students – is designing and building an efficient, battery-powered vehicle that will compete in the Shell Eco-marathon Americas 2018 competition.

The competition, held at Sonoma Raceway in Sonoma, California, will run from April 19 to 22.

UM ecoMotion is the first and only Shell Eco-Marathon team at the University of Manitoba. The team formed in September 2016.

Fourth-year electrical engineering student and UM ecoMotion’s communications lead, Alan Huynh, said that while most competitions focus on performance and speed, the Shell Eco-Marathon competition is “about efficiency – so more about towards the future of sustainability, especially with electric vehicles.”

“This competition is a little bit different than the usual ones,” he said. “This one is based on the efficiency of your vehicle, so how far you can go on one litre of gasoline or how many kilowatt joules you use per lap.”

“It wasn’t very easy at first,” he said. “Being a new team, you need to create your brand awareness.”

“Last year, being a first-year team, it’s very difficult getting funding and support,” he added. “We needed to prove to people and sponsors, specifically, that we are going to take them seriously, use their funding and resources responsibly.”

Huynh said that the team’s funding comes from a combination of sources which include private sponsors UM ecoMotion reaches out to, and different groups at the university such as Friends of Engineering, the University of Manitoba Engineering Society, and the Faculty of Eng ineering Endowment Fund.

An additional difficulty, Huynh said, was the team’s small starting group size which made it “quite impossible to build a vehicle, and design, and get members and funding.”

Now with over 50 members from a variety of engineering disciplines on the team – including biosystems, mechanical, electrical, and computer engineering – Huynh said the number of group members is no longer a challenge.

The team participated in its first Shell Eco-Marathon competition last April in Detroit, Michigan, where they placed 14 out of 17 on-track competitors with an efficiency of 80.1km/kWh. On-track competitors are teams that pass technical inspection, a 10-stage process ensuring the battery-powered vehicle complies with the competition’s rules and is safe to drive on the track.

Lynn Le, fourth-year mechanical engineering student, said, “In my opinion, our team did absolutely fantastic and surpassed all my expectations.”

“I remember panicking in January about the vehicle,” she said. “At the time, in my section, nothing was definite in design.”

“My doubt of the vehicle being able to be completed continued with me even through me helping load the parts of the vehicle into the trailer to head off to Detroit for the competition.

“My doubt lasted until Alan  [Huynh], our driver, completed a lap around the track. When I saw our vehicle finishing the first lap out of 10, I was ecstatic. I remember looking at other members of the team and yelling to each other that we made a lap. At that point, my doubt for the team disappeared.”

Off to the West Coast

Andrew Saygnavong, a fourth year mechanical engineering student, said his decision to join UM ecoMotion stemmed from his interests in the automotive industry and renewable energy.

“The team fit my interest perfectly as I am able to work on a vehicle that could potentially help the environment,” he said. “As fossil fuels slowly become more depleted on earth, it really intrigued me that the designs this team creates could potentially be used in the industry, in the near future.”

Le and Huynh echoed Saygnavong, highlighting their interests in sustainability as a primary factor in their decision to join the eco-marathon team.

For this year’s competition, Huynh said that the preparation was immediate – it began as soon as the team returned from Detroit.

“Design of this newer vehicle started basically right away when we came back because we were so excited,” he said, adding that the team’s goal is to reduce the vehicle’s weight.

Huynh also said that with the design already finished, the team is in the process of manufacturing the battery-powered vehicle and speaking with potential funders and sponsors to get it built.

Both Le and Saygnavong added that they hope the team will improve efficiency and place higher than last year.

In addition to their preparation for April’s competition, Huynh said UM ecoMotion’s goal is to engage in youth outreach. Huynh said this involves expanding young people’s interest in STEM careers – careers in science, technology, engineering, and mathematics – and working towards a sustainable future.

“We need to get them interested about these electrical vehicles and sustainable living now so when they are our age they know what to do,” he said.

“Last year the team started with about 20 to 25 members and our team has about doubled from that number,” Saygnavong said.

“More and more people are understanding the energy problem that we face and are eager to join our team.”

Bornstein’s art moving to U of M