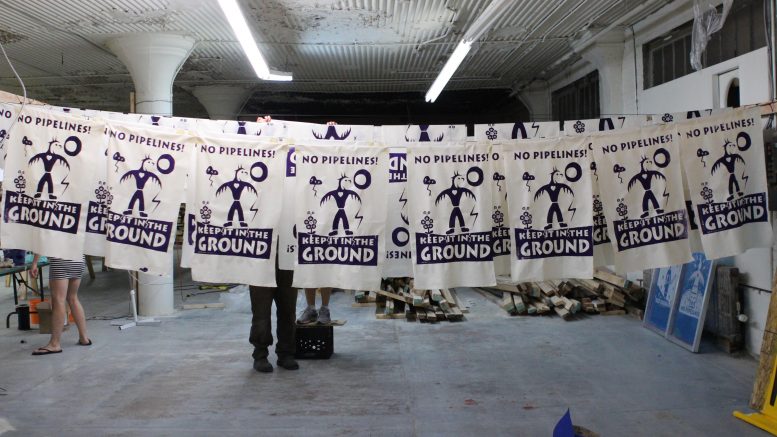 The event, titled “Beyond Borders: Pipeline Resistance from Standing Rock to Manitowapow,” was held in Robson Hall and featured panelists Aimée Craft, Clayton Thomas-Muller, Sadie-Phoenix Lavoie, and Dallas Goldtooth, who was featured via webcam.

After opening remarks by elder Carl Stone, each panelist was invited to share their stance on the history and implications of pipelines.

That same day, not long before the event began, the Supreme Court of Canada declined to recognize special religious freedoms for the Ktunaxa Nation in British Columbia, which had been fighting to prevent a private ski resort from being built on land sacred to their community.

Craft, an assistant professor of law at the University of Ottawa and former director of research of the National Inquiry into Missing and Murdered Indigenous Women and Girls, said “I think that it’s a landmark – or watershed – day, in terms of how we now know that the Supreme Court of Canada will not recognize Indigenous law in the way that we do, in the way that we value it, and in the way that we know it to be, in terms of our relationships with all of creation.” Craft taught at Robson Hall until last year before moving to Ottawa.

The law of the land

Craft went on to say that a proper examination of the legal ramifications of resource extraction in the age of what she referred to as “so-called reconciliation” requires a “trans-jurisdictional” approach.
“If you ask the simple question, ‘Who has jurisdiction over water,’ there is not a lawyer that will be able to answer that question clearly, because it’s about complex jurisdictions and complex sovereignties,” Craft said. “Part of what we don’t understand is that the water itself is a legal actor, has agencies, is a legal entity in and of itself.”

Thomas-Muller also commented on the clashes of different jurisdictions across legal borders, referring to the many layers of provincial, federal, and First Nations government relationships as “pretty confusing.”

“The buck gets passed consistently between the feds and the provinces over First Nations concerns,” he said. “And Trudeau has yet to deal with what Prime Minister [Stephen] Harper did before him when he gutted the [Navigable Water Protections Act] and removed protection over millions of lakes, rivers and streams.”

“It’s no longer required for an environmental impact review here in this country if a pipeline company wants to build a pipeline across a river that you depend on – a creek that you depend on,” he added.
“And this has significant consequences for our Native people especially, who have a sacred relationship to the water, who have the rights to hunt, fish, and trap […] We have constitutionally protected rights that are wound up in that complicated jurisdictional mess, that, in my mind, is by design.”
When asked if the panelists believe that Canadian law students are being properly educated on Indigenous law and its complicated relationship to state law, Craft said her answer “has to be no,” but noted that, “Indigenous law is learned primarily on the land.”

“Can a law school offer that? Not that I’ve seen so far,” she said. “I think there are attempts to do that – aboriginal law camps, Indigenous law camps across Canada […] A lot  of it doesn’t happen in four walls. Are there efforts being made? I think so. Are there people doing that good work? Yep.”

Goldtooth advised students currently studying law to use it to defend the rights of maginalized people, saying, “We have to re-examine who are the voiceless.”

“Who are the defenseless that we’re standing up for,” he asked. “The argument that I propose, and that a lot of our people propose, it’s not just us as individuals, as peoples, but it’s also the plants, the four-legged, the winged, the swimmers, the diggers. And that we have to rise up and re-examine how do our legal structures recognize their rights and uphold them.”

The fight against Line 3

One of the most prominent discussion points was the activists currently protesting the replacement of Enbridge’s Line 3 pipeline. The new pipeline will run from Alberta to Wisconsin, passing through Manitoba, and has already faced protests due to its $7.5 billion price tag, environmental impacts, and Enbridge’s failure to consider Indigenous rights as the pipeline crosses through land belonging to Ochapowace First Nation.

“I don’t know if Brian Pallister is worth even trying to convince, ‘cause he’s a little bit psychotic, but certainly those three powerful native politicians are,” he said.

“We need to be exerting pressure, not just on them, but on our institutions like the U of M.”
Goldtooth added that this pressure needs to be a constant force.

“Ask [elected officials], continually push them, and continually encourage them, and say ‘What’s your stance,’ and ‘Do you stand with the people,’” Goldtooth said. “And that goes for all elected leaders.”
Lavoie, co-founder of Red Rising Magazine, referred to her time at Standing Rock as a point where she realized how important solidarity between activists would be when fighting Line 3.

“We were  also there with Red Rising trying to cover stories and to kind of spread the message but also to be in solidarity and say, ‘I know that this is your fight right now, and soon we’re going to have a fight,’ because I knew Line 3 was coming, and that was on the table,” Phoenix-Lavoie said.

“And there’d become a time where we were going to need something like Standing Rock here. And we need to build those relationships.”

The panel ended with the launch of SPAC’s second Water is Life fundraising campaign. While the first fundraiser only sold t-shirts embossed with the Water is Life logo, this new campaign, which began on Nov. 6, will include tote bags, children’s clothing, and other accessories, with SPAC donating all proceeds to the Manitoba Energy Justice Coalition, a grassroots organization working towards environmental and social justice.

Danielle Morrison, one of the event’s co-MCs, closed off the seminar with a slide show of the available fundraising items. The last slide featured three young children together, outdoors, smiling brightly, all wearing Water is Life outfits.

“This is why we do the work that we do, guys,” she said, looking back at the photo.
“This is our future.”