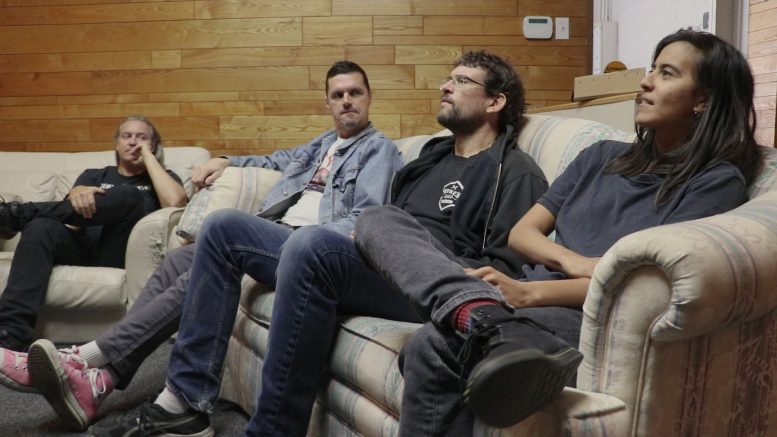 Jord Samolesky, Chris Hannan, Todd Kowalski, and Sulynn Hago (left to right) of Propagandhi sat down with the Manitoban.

Locally based and internationally beloved, Propagandhi is a gem of Manitoba’s notably strong music scene. After playing a sold-out show at the Garrick Centre on Oct. 7, the band will be hitting their hometown once again to a sold out crowd at the Park Theatre on Nov. 5.

The band – Chris Hannah on guitar/vocals, Sulynn Hago on guitar, Todd Kowalski on bass, and Jord Samolesky on drums – has been a major name in punk for decades, and is known for their musical blend of punk and metal influences and their radical left-wing politics and lyrics.

With the September release of Victory Lap, their seventh full-length album, Propagandhi has given another reason why they’re one of the most important Canadian bands playing today.

Hannah said he expected the album to sound much more like 2012’s Failed States than the final product they ended up with.

“When we were making the songs and stuff, to me it felt like – I guess I never said this – but I was almost maybe a little worried it was too much like the last one, but it was nothing like the last one. It’s strange how that happened,” said Hannah. “The songs are a little bit different, a little more melodic I suppose.”

Hago described the differences as each album having their own “colour.”

“It’s like Failed States is like a darker shade, and this one’s still got a little bit of that, but it’s just its own different colour.”

“Failed States is way more dense and kind of relentless,” Hannah added. “Whereas this one [Victory Lap], there’s a little more space, even in the raunchy songs.”

The album’s lyrics tackle issues like war, animal rights, and racism, and incorporate themes of sacrifice, hopelessness, and parent-child relationships. The songs draw on imaginary conversations, historical references, and subtle swaths of humour to get their points across.

The title track features one of the album’s most biting and explicitly political lines, targeting proponents of right-wing economics: “When the free-market fundamentalist steps on a roadside bomb outside Kandahar bleeding to death, I swear to Ayn Rand I’ll ask if he needs an invisible hand.”

When asked about the state of U.S. politics and whether Trump was simply a symptom of broader societal ills, Kowalski didn’t disagree, but offered an additional insight.

“Crazy symptom to have though,” he said. “It’s like having a giant tumour on the end of your dink. Like, you know, it’s not a small symptom.”

“In general, though, in the world, like the world’s always been crazy. It’s not like there’s suddenly war, and suddenly countries being ripped off, and suddenly you know, this and that.”

While the social realities the band’s music highlights can make for heavy or even demoralizing subject matter, Kowalski noted that he feels best about the band when they are playing benefits and finding ways to support people working in community organizing using their own skillsets.

“We’re not like natural politicians or something,” Kowalski explained. “We’re like artists and musicians and whatever, you know?”

Samolesky agreed, but lamented the fact that the organizations they try to support must exist “to pick up the slack and provide services that aren’t provided by the government or anything else.”

“We do a benefit for these things. I think it needs to be mentioned that it’s in the context of Pallister funding cuts and all that kind of stuff and being done with a big ‘fuck you’ to the provincial government,” Samolesky said.

“It’s like, I wish we could get to a place where we can envision a future where those places, you know, are looked back on and like ‘Wow, remember when we needed those places,’ you know? When we get to a better world. It’s frustrating, because I think people are excited about doing the benefit and some of the people that we’ve been in touch with at the centres are happy about it, but it’s sort of like at a sad time for it all.”

Propagandhi is returning to Winnipeg after the first leg of their tour in support of the album and will be playing a second sold-out show to the home crowd on Nov. 5 at the Park Theatre with local bands the Sorels and Mobina Galore as openers.